‘This is calumny’: Pope Francis defends Bishop Barros against charges he knew of sexual abuse 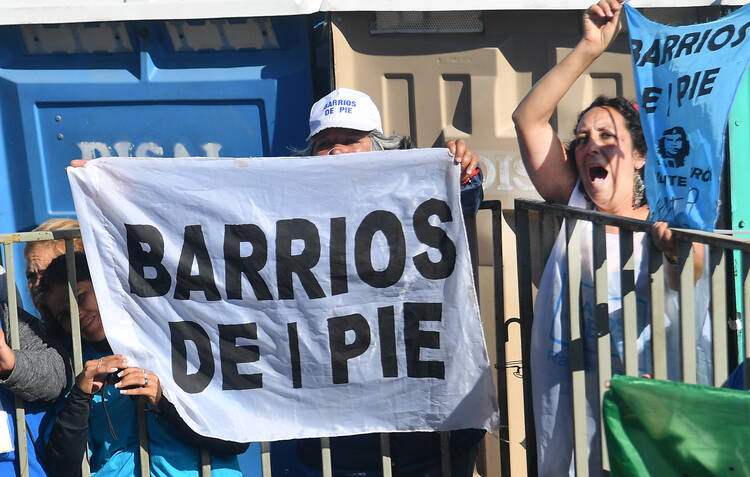 ‘This is calumny’: Pope Francis defends Bishop Barros against charges he knew of sexual abuse

Pope Francis today defended the controversial Chilean bishop, Juan Barros, when asked by Chilean journalists on arrival at Iquique, in the north of Chile, whether he supported the bishop.

“The day they bring me proof against the bishop, then I will speak. There is not a single proof against him. This calumny! Is that clear?” Francis stated.

Many in Chile opposed Francis’ appointment of Msgr. Barros as bishop of Osorno and still do because he is known to have belonged to the inner circle of the charismatic Chilean priest, the Rev. Fernado Karadima, against whom accusations of child abuse were leveled in 2010. State prosecutors could not intervene against Father Karadima then because of the statute of limitations, but a church inquiry did. Following its findings, he was removed from the ministry at the age of 80 and directed to a life of prayer and penance.

Many in Chile opposed Francis’ appointment of Msgr. Barros as bishop because he is known to have belonged to the inner circle of a priest accused of abuse.

Msgr. Barros was close to him and served as his secretary for a number of years, and very many people here feel he covered up Father Karadima’s abuse, but the bishop denies ever knowing anything about it. He repeated his denial in recent days when asked by the Chilean media and denounced the allegations as “calumny.” Many find it difficult to believe that he knew nothing.

There have been denunciations against Bishop Barros for a cover-up, with some claiming that he was present when some of the abuse happened. But he flatly denies the charges, and the church inquiry that was carried out concluded that, while there are many allegations, there are no hard facts that could stand up in a court to substantiate such charges.

Because Father Karadima was a high-profile priest, known throughout the country, the accusations and finding that he abused children shocked the nation.

Juan Carlos Cruz has publicly accused Father Karadima of abusing him and alleges that Bishop Barros was present when this happened, though the bishop categorically denies it.

On hearing what the pope said today, Mr. Cruz in a tweet commented, “How could one take a photo or a selfie while Karadima abused me and others with Barros standing at his side?” He said the pope’s words about reparation to the victims are meaningless.

There were many protests against Francis’ appointment of Bishop Barros, especially at the time of his installment. There was an international conference on the day the pope arrived that also highlighted accusations against the bishop. There have been some small protests during the visit but nothing significant.

There have been ongoing calls for the pope to remove Bishop Barros. Francis has ordered investigations but, as he made clear this morning, no one has come up with hard evidence against the bishop. And unless such proof presented to the pope, the bishop will remain in charge of the Diocese of Osorno.

Wow--this is confusing. Is Pope Francis talking about a memo or secret recording? Witnesses? It stretches credulity to assert that Barros worked so closely with this priest and never knew something was amiss.

I appreciate the need for due process and evidence but the bishop is not an employee, he's a pastor. The fact that he didn't know about this underscores the diseased nature of the environment in which this abuse occurred. Removing him would signal that important and healthy change is on the way.

I spent some time talking with a priest friend who worked closely with another priest who was convicted of sex abuse. He stated he had no indication, not even a hint that this man was engaging in such behavior. Sex abusers are clever and manipulative people not only grooming their victims but everyone around them so they can hide their evil behavior as long as they can. It is a real power trip for them. Go over to Crux and find Austen Ivereigh’s recent interview with Barros and another bishop who was accused. Also, we don’t know what all the pope has been made privy to about this case. There may be other circumstances he is holding back to maintain the entire church community in Chile, not covering up but possibly protecting lay people involved such as the accusers/ victims themselves.

In which court of law?

The pope's forceful defense of Barros is especially troublesome because Francis seems hesitant to take tough stands against bishops who protected abusive priest. Has this pope done anything to bring any ordinary who engaged in cover-ups to justice? The recent funeral of Cardinal Law reminded us all of the Vatican's decision to protect Law from any legal jeopardy and to allow him to hold a Vatican sinecure and to remain involved in curial work. Law remains the most obvious example of the lack of consequences. Who are the bishops whom Benedict or Francis removed from office?

The infallible one. Supporting child rapists, one rapist at a time. The civilized world should come together to shut down this scam. Christ said his love and Power are available to all who seek him, not to those who tithe to the worlds richest condones of child rape.

I worked for a parish where a co-worker was routinely stealing from many church sources. I went to Fr. with proof. He refused to accept it. To this day he can honestly state that he saw no evidence. An intellectual dishonesty based on a false deniability is likely in action here too.

Will Walsh
5 years ago

I wish I had some idea of how credible the allegations are against Bishop Barros. Apparently there is an abuse victim who says that Barros was present, and presumably must have been aware when he was abused by Karadima. Is this the only direct evidence of Barros' awareness of Karadima's abuse? If there are reasons to doubt the credibility of this allegation, what are they? Pope Francis had to make a call on the allegation that Barros knew, and found it to be unproven or even false. If there is reason to believe Francis is wrong, or even willfully blind, what is it? I know that many people want to shift the burden of proof to those accused in these cases, but that would do more harm than good. This matter may really be mostly about how people perceive things rather than what happened. If that is the case, I suspect Pope Francis will be vindicated in the long run for being decisive about the matter.