Why the Catholic Church can (and does) change 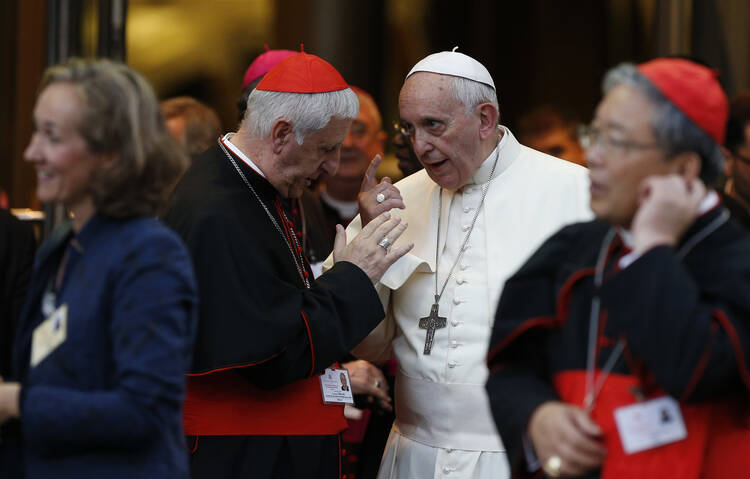 Italian Cardinal Giuseppe Versaldi talks with the pope in this Oct. 18, 2014, file photo following the concluding session of the extraordinary Synod of Bishops on the family at the Vatican. (CNS photo/Paul Haring)

In his preface to To Change the Church: Pope Francis and the Future of Catholicism, Ross Douthat describes himself as something of a Graham Greene character: the “good bad Catholic,” or the “bad good Catholic,” depending on how one uses the term. He was raised in an Episcopalian family that became Catholic when he was a teenager, but his early years were shaped by various Protestant circles: mainline, evangelical and Pentecostal. Now, despite what he calls his “spiritual sloth,” he is a deeply committed Catholic. Hence his problem with Pope Francis, who he fears may be breaking faith with Jesus.

To Change the Churchby Ross Douthat

Presently a columnist for The New York Times, Douthat is a journalist, not a theologian. But he is also an astute, often insightful Vaticanologist. His retelling of the last two papal conclaves reads like a political drama. Central to his narrative is a group of cardinals that included Carlo Maria Martini of Milan, Walter Kasper of Rottenburg-Stuttgart, Godfried Danneels of Brussels and Cormac Murphy-O’Connor of Westminster; he calls them the St. Gallen faction, from the Swiss city where they were accustomed to meet. When it became evident that Cardinal Martini would not gain enough votes at the conclave in 2005 to challenge Joseph Ratzinger, the group turned to an emerging Latin American, Jorge Mario Bergoglio from Buenos Aires, though they recognized he was more centrist than liberal and not especially favored by his brother Jesuits. Douthat claims that Bergoglio asked his supporters to support Ratzinger on the fourth ballot, assuring Ratzinger’s succession.

But after Benedict’s surprising announcement in 2013 of his resignation, the St. Gallen group turned again to Bergoglio. For some cardinals, his concern with poverty, social justice and moving beyond the culture wars was attractive; others appreciated his opposition to Argentina’s left-wing Jesuits, his popular supernaturalism and his conflicts with the Argentine president. The Latin American and African cardinals liked his non-European perspective. The North Americans saw him as someone who could address the corruption of the Vatican Curia, while the curialists themselves thought that as a stranger to Rome and elderly at 77, his pontificate would not be a long one.

In his first year Pope Francis seemed to be trying to walk a fine line between two currents in the church, one more radical and another overly traditional.

His short speech at the consistory, calling attention to a self-referential church that keeps Jesus within herself and would not let him out, calling for a pope who would help the church go out to the peripheries, had something for all the parties. By the second ballot he had emerged as a strong contender. He was elected on the fifth ballot, with over 90 of the 115 votes.

The early images of his papacy drew the world’s attention: Francis personally paying his hotel bill, choosing the Vatican guest house for his residence rather than the papal palace, washing the feet of prisoners (including two young women) on Holy Thursday, embracing children and a man whose head was covered with boils, calling for a church that resembles a field hospital after battle, and suggesting that the church should be concerned with other issues besides abortion. In his first year Pope Francis seemed to be trying to walk a fine line between two currents in the church, one more radical and another overly traditional, as if he were seeking a rebalancing rather than a revolution. But his episcopal appointments began to show a new pattern: men who were pastors, many from what some see as the church’s more progressive wing. From Douthat’s perspective, the St. Galleners had regained influence, while the new pope saw his pontificate as a corrective to that of his two predecessors.

When Francis invited Cardinal Walter Kasper to give the keynote address at a consistory for new cardinals in February 2014, Douthat saw a red light. As early as 1993, Kasper (along with two other German cardinals) had proposed relaxing the rules prohibiting divorced Catholics who had remarried without an annulment from receiving Holy Communion. This would become the most controversial question discussed at the first of the two assemblies of the Synod of Bishops on the family called by Pope Francis, a synod Douthat repeatedly describes as “rigged” or “stage-managed” (though he admits they were not as scripted as the synods under Francis’ two predecessors). But his main concern is that Kasper’s proposal meant that the church would break faith with its own tradition. This becomes his argument for the remainder of the book.

He gives a fascinating picture of intra-ecclesial battles and less than edifying episodes in papal history. He raises significant questions. His trump card is his assertion that what is at stake is not just discipline or doctrine but the very words of Jesus. But despite his efforts to be balanced, his argument frequently overreaches.

Douthat does not call the church a communion of pastors and faithful but treats it as a political body of bishops, constantly juxtaposing liberals and conservatives, progressive factions and traditionalist cardinals.

While the church always strives to honor what Jesus said about divorce and remarriage, it has made pastoral accommodations since its earliest days. St. Paul did so for a Christian married to an unbeliever who separates from his or her spouse; in such cases, he says, the believer is not bound, as “God has called you to live in peace” (1 Cor 7:15). According to Cardinal Kasper, many of the early churches allowed those living in a second relationship to participate in Communion after a period of penance, a practice tolerated by some church fathers and apparently by the Council of Nicaea, though the patristic response was not uniform. The council fathers at Trent, after a long discussion, did not condemn the Eastern Orthodox principle of “economy,” which recognizes the possibility of remarriage after a divorce, although they objected to the practices of Luther and other Protestant reformers.

The annulment process itself represents a pastoral accommodation, based on the judgment that something essential for marital indissolubility was missing, while the “internal forum” solution used by many pastors today is another example of pastoral accommodation. Francis’ own views were shaped by his experiences with the poor in Argentina. As a priest from Buenos Aires was quoted in an article that appeared in Newsweek in 2014, “When you’re working in a shanty town, 90 percent of your congregation are single or divorced. You have to deal with that. Communion for the divorced and remarried is not an issue there. Everyone takes Communion.”

Perhaps where Douthat most falls short is in describing the church. He does not call it a communion of pastors and faithful but treats it as a political body of bishops, constantly juxtaposing "liberals" and "conservatives," progressive factions and traditionalist cardinals. He ignores Francis’ efforts to respect synodality in a global church and even compares him, cautiously, to President Trump, though a populist of the left instead of the right. Rarely does he refer to the sensus fidelium, with its recognition of the Spirit’s presence in all the faithful, or to Francis’ efforts to retrieve the place of conscience and discernment in the church’s life. In “The Joy of Love,” his apostolic exhortation of 2016, for example, Pope Francis refers to discernment at least 20 times. 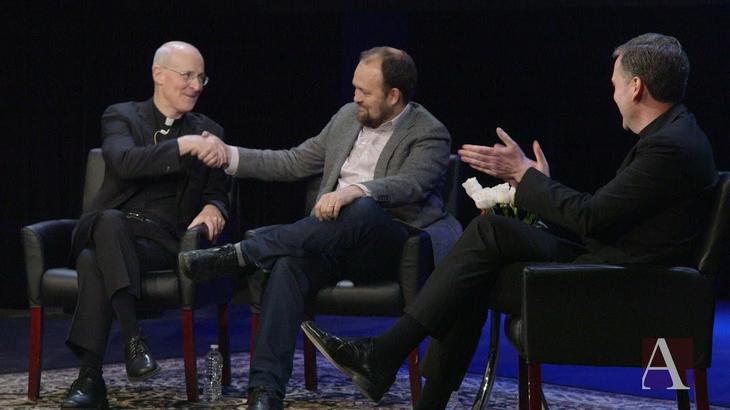 Reception of “The Joy of Love” has been mixed. Theologians see its emphasis on conscience as foreshadowing new developments in moral theology. It has generally been welcomed by the laity. According to the Pew Research Center, 62 percent of Catholics favor allowing access to Communion for those Catholics who have remarried without an annulment, though Francis has made clear that his exhortation was not meant as a general permission for this practice. Douthat himself admits that the resistance to Francis is small, more a battle among elites than with the grassroots of Catholicism. A minority of bishops and younger priests remain critics, while many bishops in the United States, concerned about the unity of their dioceses, have remained silent. Others are positive, including Cardinal Kevin Farrell, prefect of the Vatican Dicastery for Laity, Family and Life.

As James Keenan, S.J., of Boston College, says in a forthcoming book, bishops and cardinals together with theologians in Argentina, Austria, France, Germany, Italy and South Africa have taken creative steps to share “The Joy of Love” with their people. Cardinal Schönborn of Vienna calls for patience, noting that reception usually takes years. Pope Francis himself, speaking of the efforts of the faithful to live out the Gospel, says simply, “We have been called to form consciences, not replace them.”

This article also appeared in print, under the headline “A church that can and does change ,” in the April 2, 2018 , issue.

Thomas P. Rausch, S.J., is the T. Marie Chilton Professor of Catholic Theology at Loyola Marymount University in Los Angeles. His most recent book is The Slow Work of God (Paulist Press).