Two new books on salvation ask the ultimate question: Are you saved? 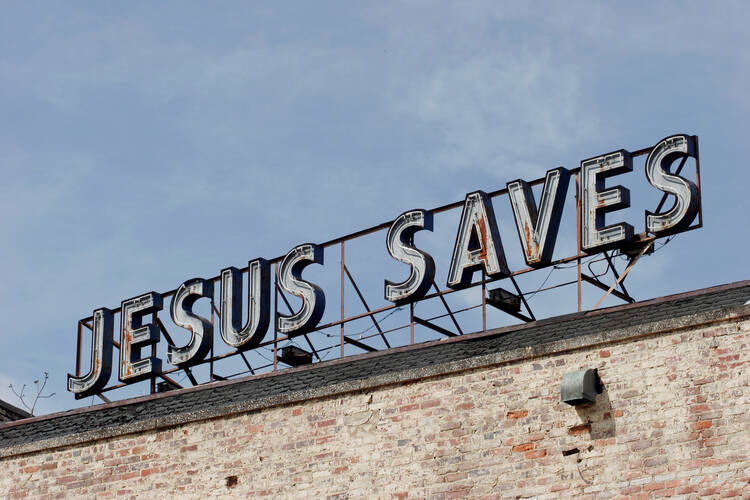 Jürgen Moltmann once wrote, “If Christian hope is reduced to the salvation of the soul in a heaven beyond death, it loses its power to renew life and change the world, and its flame is quenched.” He came to this insight through his own hard experience. He was raised in a secular family, drafted into the German army in 1944 and held for three years after the war as a prisoner of the British. The confrontation with the atrocities committed by his country’s forces made him wish that he had perished with so many of his comrades. Meeting some Christian prisoners and receiving a small book of the New Testament and Psalms led to his conversion to Christianity and later to a career as a theologian. His work is often called a “theology of hope.”

That All Shall Be Savedby David Bentley Hart

Two recent books deal with the Christian understanding of hope and the doctrine of salvation. Michael Patrick Barber’s Salvation: What Every Catholic Should Know (Ignatius Press, 2019) takes its point of departure from the question we so often hear asked by evangelicals: “Are you saved?” David Bentley Hart’s That All Shall Be Saved: Heaven, Hell and Universal Salvation (Yale University Press, 2019) challenges the idea of hell as an everlasting torment, arguing that it is not really present in the New Testament. Barber is a professor of Scripture and theology at the Augustine Institute Graduate School of Theology; Hart is an Eastern Orthodox scholar of religion, philosopher and social commentator.

Michael Patrick Barber’s Salvation: What Every Catholic Should Know takes its point of departure from the question we so often hear asked by evangelicals: “Are you saved?”

Barber’s concern is to unpack the meaning of salvation in Christ from a Catholic perspective, using Scripture, the church fathers and frequently the Catechism of the Catholic Church. He sees salvation as far more than “fire insurance.” It means the gift of grace, uniting us with a Christ who empowers us with works having salvific value; thus salvation is a present as well as a future reality. He stresses its Trinitarian and communal dimensions: Salvation gives us a share in the life of the Trinity and bonds us to others sharing life in Christ’s body, the church. It cannot be reduced to a “mere individualism” or limited to the baptized, nor is it merely legal or “forensic.” Theologically, Barber is careful to move beyond an Anselmian theology of substitutionary atonement. He stresses that the New Testament language of redemption is metaphorical, and the cross a sign that salvation is “free” but not “cheap.”

What I missed in his treatment is a “thicker” sense that salvation also means the triumph of God’s justice, that it empowers us to witness to God’s reign and includes creation itself, though he mentions this briefly. The reign of God, so important in Jesus’ preaching, seems to play little role. He argues that hell cannot be reduced to annihilation, that it involves unending affliction, an approach that distinguishes his book strongly from Hart’s.

David Bentley Hart’s That All Shall Be Saved: Heaven, Hell and Universal Salvation challenges the idea of hell as an everlasting torment, arguing that it is not really present in the New Testament.

Hart’s focus is much narrower. His book is a sustained argument that many in the first five Christian centuries believed that all would be saved (apokatastasis). They did not reject the idea of hell, but following St. Paul in 1 Corinthians 3, understood it as purifying fire, not an unending one. At the heart of his argument is the idea that a God who creates a world in which eternal suffering is possible, even if the result of one’s free choice, could not be the infinitely good God of Christianity. Thus he says that the God in whom the majority of Christians have believed appears to be evil. He finds the “infernalist orthodoxy” to be heartless and ultimately quite ridiculous, with those holding to it bound by dogmatic imperatives and presuming an inherently absurd model of freedom.

There is much that is substantive in his argument. His critique of the traditional notion of original sin, with an inherited guilt that separates even infants from God, is commendable, and he rejects the idea of “limited atonement.” Like Barber, he stresses the corporate nature of salvation, and like Schillebeeckx, he questions how the blessed—living “next door,” so to speak, to those in torment—could enjoy eternal happiness. But in spite of several claims that he respects his adversaries, there is a self-righteous tone to his writing. He repeatedly dismisses the arguments of the “infernalists” as illogical. Also, I would like to have seen more evidence for his claim of early universalism beyond his appeals to Origen, Gregory of Nyssa, Isaac of Nineveh and Maximus the Confessor.

Barber argues against Protestant soteriology, particularly an evangelical, overly individualistic approach. In this vein, he contrasts Catholic and Protestant views on justification, good works, merit, transformation and purgatory. Hart comes close to suggesting that the emphasis on an eternal hell is a product of Western theology, while the theology of the Eastern church is more gracious. But the issue is more complex.

Some Catholic theologians maintain that heaven and hell are asymmetrical concepts; they are not on the same level. The doctrine of the Incarnation suggests God’s solidarity not only with the just but with all creation.

The Catholic Church has never condemned the symbolic approach to a fiery hell of Origen, Gregory of Nyssa and others—though Origen’s view of the restoration of the damned and the demons was condemned by the Synod of Constantinople in 543. Some Catholic theologians maintain that heaven and hell are asymmetrical concepts; they are not on the same level. The doctrine of the Incarnation suggests God’s solidarity not only with the just but with all creation. According to Karl Rahner, “Since we are living in the eschaton of Jesus Christ...we know in our Christian faith...the history of salvation as a whole will reach a positive conclusion for the human race through God’s own powerful grace.” While the Catholic Church believes in the possibility that one might definitively reject God’s grace, it has never taught that anyone is actually in hell. Hart does not mention these subtleties.

Ways of Salvation?
Francis A. Sullivan

Without the love of neighbor, there is no salvation
Peter Schineller

Jesus’ teachings about time and eternity remain controversial. While Hart is careful to take cultural and literary context into account, Barber at times comes close to a literalist reading of the text. Thus Hart argues at length that aiōnios in ancient Greek literature meant a limited period of time, though in English, when referring to hell or God’s judgment, it is usually translated “eternal” or “everlasting.” In the case of John, however, it refers not to time but to the divine realm that Jesus introduces “from above.” Barber uses the passage in John to argue against the “temporary” meaning of aiōnios when used elsewhere.

Both books are worth reading, though they might more closely have linked salvation with Jesus’ preaching of the reign of God and its salvific empowering of us to work for the realization of the kingdom in history. Moltmann is right; salvation means more than saving one’s soul. Hart’s focus is more limited, but his vision of Christ’s victory over evil and death as total, embracing all creation and raising it up in perfect union with God when God will be all in all, is fundamental. His argument deserves serious consideration.

This article also appeared in print, under the headline “More than ‘saving one’s soul’,” in the November 25, 2019, issue.