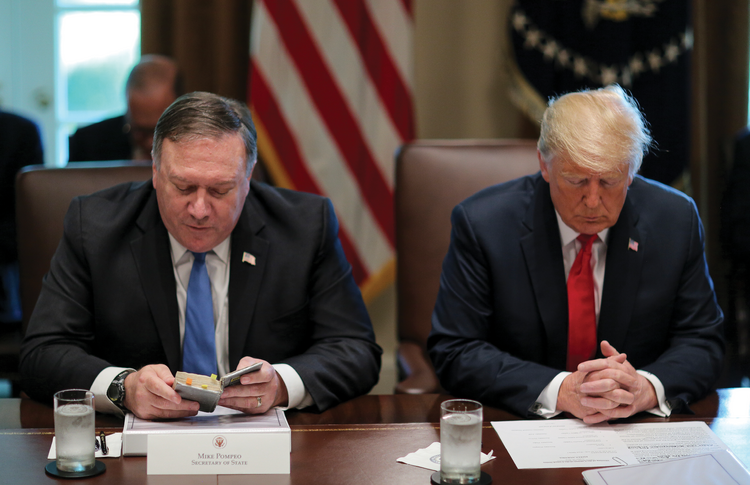 Secretary of State Mike Pompeo, left, accompanied by President Donald Trump, reads a prayer at the beginning of a cabinet meeting in the Cabinet Room of the White House, Thursday, Aug. 16, 2018, in Washington. (AP Photo/Andrew Harnik)

I still recall the unusually warm sunshine on the Mall in Washington, D.C., on Jan. 27, 2017, when I took part in the annual March for Life. The warmth matched the exuberant, hopeful and youthful spirit of “the largest annual human rights demonstration in the world,” as the president of March for Life, Jeanne Mancini, described it.

I remember, too, the uneasiness I felt at some of the other marchers’ adulation of Vice President Mike Pence, whom the march’s organizers touted as the first sitting vice president ever to address the event. His boss, President Trump, had come to office after a campaign in which he had expressed support for torture and the killing of civilians in the war on terror; spoken disdainfully of women; mocked the disabled; showed reckless disdain for the rule of law; retweeted racist remarks; and derided entire classes of human beings, including Muslims and immigrants. Only a few days before the march, he had lied about the size of the crowd at his inauguration. On the very afternoon of the march, he announced his travel ban targeting Muslim-majority nations. How could marchers for the dignity of the voiceless and the vulnerable extol this administration?

My question was not so different from the one that many people have asked since Mr. Trump’s election: How did he achieve the level of support that he did? The question becomes more pointed with respect to Christian voters. Mr. Trump won the votes of 81 percent of evangelicals, his strongest demographic. Catholics, too, were a puzzle, not because 48 percent voted for Hillary Clinton to Trump’s 45 percent but rather because in polls conducted the previous June, Ms. Clinton had led among Catholics by 19 points. Why did so many turn to Mr. Trump on Election Day?

I sympathize with and share Christians’ support for President Trump’s policies on behalf of unborn persons. What I do not understand is their adulation—the spiritual fervor that they bring to his rallies, their praise for him as the most pro-life and pro-Christian president in history—especially in light of his many defilements of dignity in private and in public, in word and in deed.

I sympathize with and share Christians’ support for President Trump’s policies on behalf of unborn persons. What I do not understand is their adulation—especially in light of his many defilements of dignity in private and in public, in word and in deed.

Angela Denker, a Lutheran pastor, takes up this same puzzle in her new book Red State Christians. When I cracked open the book, I wondered if Denker would recite the mainstream media’s standard narrative regarding evangelical Christians, whose themes include their belief in a Christian America; their worship of the flag; their veneration of the military; the high holy feasts of Memorial Day, the Fourth of July and Veterans’ Day; guns; patriarchy; white people; the prosperity gospel; high school football; unqualified dispensationalist support for Israel; a singular focus on abortion and a lack of concern for babies after birth; wealthy leaders and televangelists; poor, rural churchgoers; and, gluing everything else together, the penal substitution theology of the atonement.

Such a recitation, however, is not Denker’s central aim. Rather, as she announces in her introduction, she seeks “greater engagement and conversation at a time when America feels pulled to its extremes, when our first national impulse is to block and unfriend anyone who disagrees with us.” She holds that “[w]hen we don’t avoid people who think differently than we do, we gain an opportunity for growth and national renewal.”

Acting on this wisdom, Denker spent an entire year making trips into some of the reddest parts of America: a Dallas megachurch; the March for Life; the churches of Orange County; middle Pennsylvania; the southern border in El Paso; high school football culture in Florida; Catholic New Hampshire; and her father in law's childhood home in western Missouri.. In all of these places, she sought out Christians who voted for Mr. Trump. That she would travel so widely indicates her open heart, open mind and willingness to look freshly at U.S. Christians, as do her efforts to speak with whites, blacks, Latinos, Asians, Arabs, rich, poor, men, women, Catholics, Protestants, Muslims, intellectuals, leaders and rank-and-file churchgoers—among all of whom can be found supporters of President Trump.

Angela Denker holds that “[w]hen we don’t avoid people who think differently than we do, we gain an opportunity for growth and national renewal.”

Denker does not leave her convictions at home, though, and they are progressive Christian ones. Summing up her travels in the conclusion, she declares, “I refuse to whitewash the troubling incidents I witnessed and heard.” She continues, “Primarily among pastors and media figures, among wealthy and powerful people, I heard people use Christianity to justify American Christian Nationalism that would seek to harm the weak among us: refugees, the poor, women, people of color, the LGBTQ community.” She omits unborn persons from the weak, though she sympathizes with the spirit of the pro-life cause. She also accepts the claims of the L.G.B.T. movement without qualification.

Accordingly, Denker depicts most tartly those Christians and churches who most closely match the mainstream media’s narrative. She finds red-state Christianity at its most rough-hewn at the Dallas megachurch on the Fourth of July. Southern Baptist, festooned with flags, blaring sermons on “America as a Christian nation,” this congregation is the main subject of Chapter 1, and here she dispenses zingers most thickly. “Jesus better make room for America in the heart of the believer,” she writes. “And you couldn’t tell which was taking up more real estate.” The evangelicals who support Mr. Trump “love a redeemed sinner, especially when he’s white, male, and rich.” The church practices “the “near deification of the American military,” and its leaders are “American Pharisees, the disciples of Christian nationalism.”

Her zingers taper but recur throughout the book. Her chapter on Trump-supporting Catholics is titled, “Building a New American Kingdom and Defying the Pope.” She is at her harshest when describing the subordination of women, as in Orange County: “Nowhere else in the country are women expected to toe the line between Madonna and whore so effortlessly.”

This narrative, though, is not Denker’s dominant theme. Immediately following the “I refuse to whitewash” statement in the conclusion, is a paragraph that begins, “Still, as I come to the end of this journey, what sticks with me are the stories of surprise. All across America, people are doing surprising things that don’t fit into our prescribed boxes that we use to categorize people.”

Angela Denker: "All across America, people are doing surprising things that don’t fit into our prescribed boxes that we use to categorize people.”

In the chapter on the March for Life, Denker walks alongside a grandmother from Maryland who did not vote for Mr. Trump but is “thrilled” with his support for religious freedom and unborn life. While the author expected to find a Trump rally at the march, she did not spot more than five red MAGA hats in the crowd and discovered that many of the marchers were conflicted about their support for the president. At a pre-march rally, she heard Russell Moore, a Southern Baptist leader whose opposition to President Trump has raised the ire of fellow evangelicals, declare that both refugees and unborn persons are pro-life concerns. One speaker at the march, a former N.F.L. player, declared that “abortion advocates are our brothers and sisters.”

In Denker’s subsequent visits around the United States, she remains open to being surprised. Again and again, she finds red-state Christians who are ambivalent, not zealous, in their support for Mr. Trump. Repeatedly she remarks upon the diversity of the churches she visits. Even the Dallas megachurch is populated with old and young, African-Americans, Asians and Latinos. Most of all, she finds common ground with her interlocutors—compassion toward the suffering, commitment to family, tales of conversion to Christianity and love for Jesus.

In her conclusion, she recounts a story of attending her father in law's family reunion back in rural western Missouri, where she, a woman minister from the more liberal Evangelical Lutheran Church of America (she is from Minneapolis, MN), was surrounded by members of the conservative Lutherans of the Missouri Synod—Trump voters. After helping her 2-year-old son change his clothes in the church bathroom, she found her husband telling her that everyone had hoped that she would lead the prayer before the meal.

Such bridge-building, boundary-crossing gestures are a microcosm of what Denker believes America needs in the present moment. “My Red-State Christian story began with Trump,” she concludes, but “the place my story ends is far from Trump. It ends in places in America where people are forming unlikely alliances, surprising each other and surprising political pundits, to build a future that looks nothing like the Republicans or Democrats of the past.” Doubtless, some readers will differ sharply with Denker over her political and theological views—as I do in some respects—but her intrepid forays of empathy show us how these very differences can be met with love rather than with bitter, downwardly spiraling enmity.

This article also appeared in print, under the headline “Christianity in Trump’s America,” in the September 2, 2019, issue. 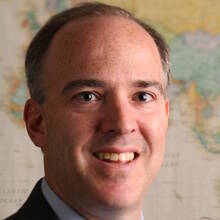 Daniel Philpott is a professor of political science at the University of Notre Dame and author of Religious Freedom in Islam: The Fate of a Universal Human Right in the Muslim World Today (Oxford 2019).