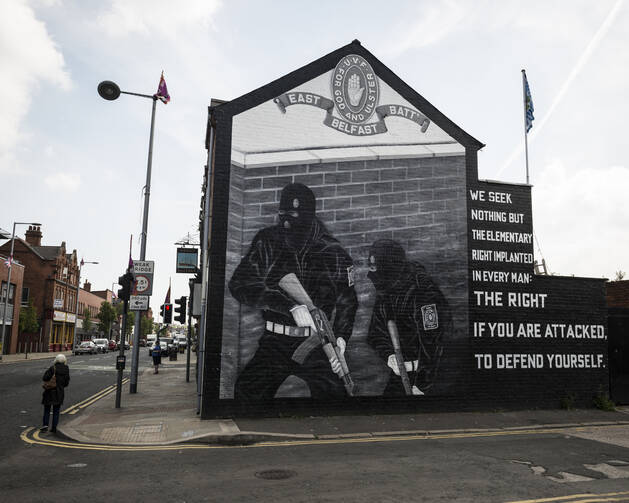 In his New York Times review of Say Nothing, Roddy Doyle reminds readers of the nappy pin—the diaper safety pin—that appears at the beginning and end of Patrick Radden Keefe’s account of the Troubles and their aftermath. The diaper pin was the only ornamentation in Jean McConville’s wardrobe, a woman disappeared by the I.R.A. for allegedly informing British authorities of the I.R.A.’s membership and operations. The diaper pin was indicative of McConville’s identity as a struggling, widowed mother of 10. But the diaper pin is also a haunting symbol of the reality of children caught up in a war that was not a war—a spasm of violence that marked a region desperate for economic progress and equal standing for a minority population.

The diaper pin triggers for me the memory of the full title of Kurt Vonnegut’s most famous novel, Slaughterhouse-Five or The Children’s Crusade: A Duty-Dance with Death. The exchange that accounts for the second half of Vonnegut’s title sets the tone for the book. Mary O’Hare, the wife of one of his war buddies, seethes when Vonnegut and her husband work to recall their experience as soldiers and POWs in World War II. She tells them curtly, “You were just babies then—like the ones upstairs!” Vonnegut acknowledges this, and Mary continues:

But you’re not going to write it [a war novel] that way, are you....You’ll pretend that you were men instead of babies, and you’ll be played in movies by Frank Sinatra and John Wayne or some of those other glamorous, war-loving, dirty old men. And war will look just wonderful, so we’ll have a lot more of them. And they’ll be fought by babies like the babies upstairs.

It is a powerful critique of how war is remembered, retold and restarted anew. In response, Vonnegut says to Mary, “I’ll tell you what.... I’ll call [the novel] ‘The Children’s Crusade.’” Say Nothing has at its core the same raw honesty that Vonnegut pledges.

I grew up in Boston in the 1990s. There were murals throughout South Boston that depicted the I.R.A. as heroic, as a band of underdogs courageously battling British oppression.

Every crusade has a cause that propels it, and perhaps the Irish Republican movement to end the injustice and cruelty of the British government and its proxies in Northern Ireland was more justified than most. But Radden Keefe’s account makes it clear that even this crusade was a children’s crusade—and as such, it should be seen as just as repugnant as any other children’s crusade.

Dolours Price, Marian Price, Brendan Hughes, Gerry Adams and many of the other figures at the center of Say Nothing were most active and, seemingly, most violent between the ages of 18 and 24. They should have been at university or learning a trade other than making improvised explosives and subverting British interrogation. The McConville children, orphaned when their mother was disappeared by a division of the I.R.A., also lost their childhood when their mother was taken from them. Yet, living in Divis Flats—akin to a Cabrini-Green housing project—caught up in the violence of Belfast in the late ’60s and early ’70s, the 10 children had already suffered significant trauma. Some months after Jean was kidnapped and murdered, the youngest members of the family were forced to live in institutions and orphanages. There they met further suffering, including physical and sexual abuse by Catholic religious and staff at a range of institutions. They were constantly harassed by their peers as being the children of an informer.

The McConville children have suffered all their lives, a grinding suffering accompanied by the fact that for over 40 years their mother’s body had not been recovered.

I grew up in Boston in the 1990s. There were murals throughout South Boston that depicted the I.R.A. as heroic, as a band of underdogs courageously battling British oppression. Perhaps Radden Keefe’s account of the Troubles serves to dislodge the sentimentality and nostalgia many descendants of the Irish feel for the work of the I.R.A. It is also a lesson in how sentimentality and nostalgia might distort the work of an American academic institution seeking to archive the history of a complicated crusade, a crusade later recounted by adults who were, in their youth, complicit in acts of murder. Say Nothing is filled with stories that decouple history from sentimentality. It is also a stay against easy judgement, easy exoneration and easy acceptance of violence as a part of any crusade.

Jean McConville’s presence haunts this book, but Dolours Price’s life energizes it and makes it thrillingly complex. Dolours Price was at once a young university student, a member of the I.R.A.’s Unknowns, a bank robber, an executioner, an Old Bailey bomber, a convict, a political prisoner, a hunger striker, the wife of an actor and a disaffected former member of the larger crusade for full Irish independence. Her life is fascinating, and more than any other person crusading in the Troubles, helps underscore the moral complexity of the violence that unfolded in Northern Ireland.

It will be difficult for any reader to shake the bare cruelty of the medical staff of Brixton prison force-feeding Dolours and her sister, Marian, for 167 days. Dolours endured this barbaric feeding, likened to rape, because she sought to give herself to the cause of full Irish independence and the end of British cruelty. Yet, along with this image, it would be difficult for any reader to shake the image of Dolours standing over Jean McConville as she is executed. Therein lies the complexity of the crusade. On the one hand, it appears uniquely pure in what it seeks, while on the other hand, it employs means that are never (at least by our Christian tradition) justifiable in any way.

I am left pondering a quotation from the anthropologist-philosopher Claude Levi-Strauss that Radden Keefe offers in the concluding section of the book: “For the majority of the human species, and for tens of thousands of years, the idea that humanity includes every human being on the face of the earth does not exist at all. The designation stops at the border of each tribe, or linguistic group, sometimes even at the edge of a village.” During the Troubles, the designation “human” extended to a narrower and narrower set of human beings.

The Levi-Strauss quotation could have easily been a part of Catholic Modern, our selection from last quarter. Fraternal Catholic modernists, shaken by the Holocaust and the consequences of anti-Semitism, sought to extend the designation “human” along with the concept “human rights” to all human beings. Clearly, the question is alive and well in our church and in our country today. Just how widely does our human concern extend? Just how widely does the designation “human” extend? More important, where does it stop and why? Say Nothing further complicates these questions and how exactly we countenance violence.

I offer the following questions to continue the conversation.