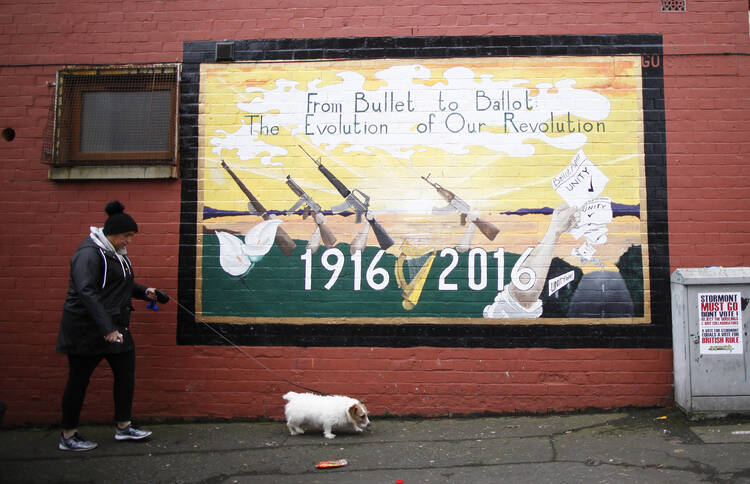 A Republican mural in West Belfast on March 2. A historic vote has upended the political landscape in Northern Ireland. (AP Photo/Peter Morrison)

After historic elections on March 3, Northern Ireland’s politicians are negotiating the formation of a new government in an unprecedented political landscape. For the first time since the partition of Ireland, Unionists are not in a majority in Stormont, where Northern Ireland’s parliament meets. The Democratic Unionist Party suffered a disastrous election, losing 10 seats and coming in only one seat ahead of Sinn Féin, the largest nationalist party.

The two parties are now in talks for a new power-sharing deal, although it is uncertain that they will reach consensus within the designated three-week time period. If they do not, a new election may be called or direct rule from London reinstated.

That outcome would represent a serious setback to progress made under the Good Friday accords that in 1998 brought an end to “the Troubles,” decades of civil conflict in Northern Ireland between Catholic nationalists and Protestant unionists. Tension between the political parties that represent Northern Ireland’s still often divided communities have intensified since the collapse of the last government, when Sinn Féin deputy first minister Martin McGuinness resigned, taking D.U.P. First Minister Arlene Foster down with him.

For the first time since the partition of Ireland, Unionists are not in a majority in Stormont, where Northern Ireland’s parliament meets.

Mr. McGuinness had demanded the resignation of Ms. Foster when it emerged that a flawed green energy scheme she headed was paying out more than it cost to fuel biomass boilers, prompting allegations of widespread abuse of the system and claims that empty sheds were being heated. It is estimated the scheme will eventually cost Northern Irish taxpayers over £400 million.

Ms. Foster remains head of the D.U.P., despite the party’s heavy losses and Sinn Féin’s insistence that it will not enter into government with her as first minister. The D.U.P. leader fueled tensions during the election campaign by taking a strong stand against a proposed law that would give official protection to the Irish language, a key issue for Sinn Féin and the nationalist community.

In a memorable press conference, Ms. Foster compared Sinn Féin members to crocodiles by saying: “If you feed a crocodile, they’re going to keep coming back and looking for more.” The line was played on repeat during the campaign, with Sinn Féin leader Gerry Adams responding at another press conference: “See you later, alligator.”

The remarks prompted several people to turn out on Election Day in crocodile costumes, an indication of how Ms. Foster’s comment had energized nationalist voters. But it was Brexit and the prospect of Northern Ireland being taken out of the European Union that most motivated voters, according to Sinn Féin’s Gerry Adams.

Northern Ireland voted “Remain” in last year’s referendum by 56 percent to 44 percent, despite the D.U.P., Northern Ireland’s largest party, campaigning for Brexit. With the prospect of a land border once again dividing Northern Ireland from the Republic, Mr. Adams said the elections proved that many were angry at the prospect of having to leave the European Union and that the country should receive a special designated status within the union following Brexit.

With Britain preparing to formally begin the process of leaving the European Union on March 15, an uncertain political scene in Northern Ireland will be a cause of anxiety for the prime ministers of both the United Kingdom and the Irish republic. Both Teresa May and Enda Kenny have called for urgent talks and positive engagement between the unionist and nationalist parties.

Northern Ireland’s bishops released a statement encouraging both sides to leave behind the bitter language and tone of conflict that has returned to the political discourse in recent weeks. But with the Irish language act and unresolved matters from the Troubles posing contentious hurdles over the coming weeks, common ground may prove difficult to find.

By law, another election will be called if the parties cannot come to agreement within three weeks. But in the aftermath of a divisive campaign, a bruised D.U.P., an empowered Sinn Féin and general uncertainty around Brexit, there is little desire for a fresh election. The former Northern Ireland secretary of state, Theresa Villiers, indicated that in these special circumstances, the parties should be given more time to reach a power-sharing agreement.