Review: What dead animals (and novels) can teach us about live humans 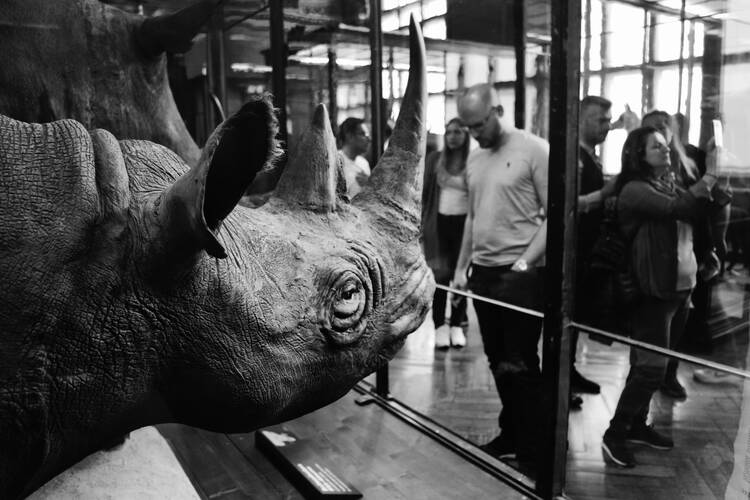 “The economy of animals can only be studied when the functions of life are in full activity” is how British zoologist William Swainson opened his Treatise on Taxidermy, published in 1840. “But in order to acquire a more accurate knowledge of their external form, and to investigate their internal structure, it is absolutely necessary to examine them in a dead state.”

Is this not also why we read and write fiction? While we suspend our disbelief long enough to fall for the illusion that characters are dynamic and making choices in the present, they are in fact dead on the page, their course of action predetermined by a taxidermist with a pen. Yet by examining characters “in a dead state,” we are able to investigate their, and our, internal structures.

A search for the term “taxidermied” on eBay yields over 25,000 results. You could own your very own stuffed coyote for only $320. Or less if you make the best offer. Looking for a gag gift? Anthropomorphized squirrels who hunt, canoe, fish and drink beer are a popular choice.

While taxidermy’s popularity as a profession fell off following World War I, it is experiencing a renaissance among a new generation. Matt Blitz, writing in Smithsonian magazine in 2015, speculated that taxidermy served as a tactile encounter with the real for a generation whose experience of the world had glazed over from screens and social media.

"While we suspend our disbelief long enough to fall for the illusion that characters are dynamic and making choices in the present, they are in fact dead on the page, their course of action predetermined by a taxidermist with a pen."

The fragile space between life and death evokes the most profound stories any culture produces. (For my money, the best television show so far in this millennium was HBO’s “Six Feet Under,” a series about a family-run funeral home.) I assumed that this general rule extends at least in part to the rest of the animal kingdom. And so I could not wait to get my hands on Kristen Arnett’s debut novel, Mostly Dead Things, after hearing its premise: a working-class Florida family of taxidermists reeling from the suicide of their father. Inevitably all great stories deal in death to some degree, but a project that promises to include it as a central character makes a risky, high-stakes promise to the reader.

With Mostly Dead Things, Arnett more than delivers on that promise. More than about death, it is also a novel about intimacy and wanting what is forbidden, about childhood and family, about absent parents and absent lovers, and about the secondhand self-destruction that can be wrought by ignoring cries of the heart.

The novel opens with Jessa-Lynn Morton wandering into her family’s taxidermy shop late one night to find not a pheasant or fox or hawk cut open on the worktable, but her dead father—who has left behind a pistol and an apologetic suicide note for only Jessa-Lynn to read.

Arnett does not dwell long on the great tragedy of the opening scene, at least not at first. The book is filled with dark humor—including the book’s bright pink cover, which elicits a “What are you reading?” from close acquaintances and strangers alike, who are either delighted or politely disturbed upon hearing a quick summary.

We quickly learn that Jessa-Lynn Morton’s life holds a great number of challenges apart from her grief over a father lost to suicide. She is left to run the family business, beset by tall stacks of bills and fewer and fewer customers. Her brother takes more sick days than anyone could possibly have banked, yet he is not at home raising his daughter.

Every other chapter brings a scene from Jessa-Lynn’s past, which achieves the double effect of adding depth and drama to the characters as well as exposing the straitjacket on Jessa-Lynn’s emotional capacity. The suffocating tyranny of memory slipping into nostalgia tortures her. As she describes it, “Nostalgia carved out my insides, padding my bones until my limbs stuck, splayed. Frozen in time, refusing to live.” The reader encounters a confessional, brief breaking of the fourth wall near the end of the novel, even after Jessa-Lynn breaks free from the chains of her past life. It is framed as “one last, good memory,” signaling a self-awareness and a loss of self-control that anyone who has been trapped in the memory of a former life or lover can relate to.

The locus of Jessa-Lynn’s memories is her childhood best friend, Brynn, with whom Jessa-Lynn discovered her sexuality and fell in love, but who then went on to marry Jessa-Lynn’s brother, Milo. Jessa-Lynn languishes in her memories because it is the only way she can have Brynn, who later ran off without warning and without looking back, leaving her children and the rest of the Morton family behind with broken hearts and a Florida-sized sense of abandonment. If the Mortons are not comfortable talking about their father’s death, processing the wound left by the siblings’ shared partner remains the final, distant emotional frontier.

“A good way to think about taxidermy is to imagine you’re God,” Arnett wrote last year in an essay for Hazlitt. “Take the dead thing and resurrect it. Shape it in your own image.”

Despite that conviction, God and religion are largely absent in the novel. But Arnett, who was raised in an evangelical home, writes in her Hazlitt essay that she knows “all about mortification of the flesh, the zombie special-feature of a body rising from the dead, the marvel of the reanimated holy corpse.” And religious sensibilities manage to find their way into this story, in the resurrection of intimacy and love of characters who had sworn off it for good.

The most powerful moments in Mostly Dead Things are not in the recountings of lost hurt but in the intimate, sacramental encounters between wounded and estranged family members.

The most powerful moments in the novel are not in the recountings of lost hurt (of which there are perhaps one or two too many) but in the intimate, sacramental encounters between wounded and estranged family members.

“I don’t need closure. I’ve got closure!” Jessa-Lynn’s brother unconvincingly bellows at the book’s climax, slapping an old glass case and filling his hand with shards of glass. Jessa-Lynn takes out the shards from her brother’s hand, mingling her blood with his to heal him. The intimacy is a conduit for emotional healing, and closure gives way to real reconciliation.

Stephen Markley’s ‘Ohio’ is the novel you need to read to understand the Midwest today.
Zac Davis

Mostly Dead Things is about learning to live with—and not just tolerate or ignore—the worst things we have done, and have had done to us. “How can we be that terrible and still worthy of love?” the Mortons ask themselves, joining a chorus of theologians across millennia.

While it is tempting to think of God as a taxidermist (or a novelist), the divine work is not so much rearranging our dead limbs as it is staring unflinchingly at wounds, getting hands bloody and pulling out the broken shards.

This article also appeared in print, under the headline “Life and death in the animal kingdom,” in the July 22, 2019, issue.

Zac Davis is an associate editor for digital strategy at America and a host of the podcast “Jesuitical.”