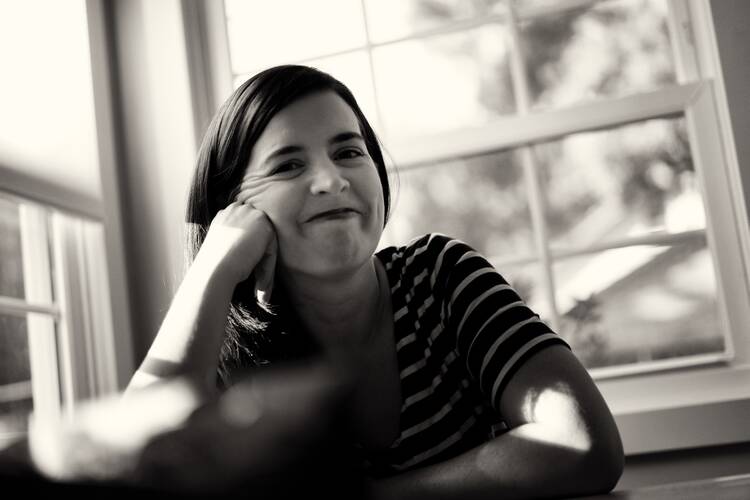 The idea that we earn or even deserve the good things that happen to us seems, on the face of it, harmless. But what does it mean if, like Kate Bowler, you receive a diagnosis of Stage 4cancer at 35? Is the cancer a sign you have done something wrong? Is God punishing you?

Those are questions Bowler takes on in her book, Everything Happens for a Reason: And Other Lies I’ve Loved, for which she just won a Christopher Award. Her book points out the harmful implications of the “prosperity gospel,” the theological idea that if we pray enough, if we are good enough, then God will send blessings our way. Bowler is a professor of Christianity in North America at Duke Divinity School, and she speaks from both an academic and personal perspective about the spiritual myths concerning health. Here she talks with the hosts of America’s podcast, “Jesuitical,” Ashley McKinless, Olga Segura and Zac Davis. She explains what her cancer diagnosis taught her about American Christianity and more. The interview has been edited for length and clarity.

Jesuitical: When did that saying, “Everything happens for a reason,” start to ring hollow for you? Did something change for you when you were diagnosed with Stage 4 cancer at 35?

Kate Bowler: I would probably like to imagine that I was so sophisticated that I didn’t need that phrase. But I spent so long studying the prosperity gospel—the idea that God wants to bless you with health and wealth and happiness—that I think I had really gotten used to it as this sort of synthetic explanation for the good and the bad stuff that comes up in your life. And maybe I used it a little bit as a motivation. Like, when something good happened, it just proved to everyone how insanely hardworking I was. I was probably a secret believer in that for quite a while.... And then the second I got sick, I started to realize how cruel it felt to hear someone say that when I was really struggling to understand why something so terrible could happen to me.

You’ve mentioned that even health care professionals—and you have interacted with lots of people in the field—can say problematic things. Is it somehow worse coming from people who should know better?

Last week, I was being wheeled into a procedure. I was in the gurney, in the sad medical gown and looking really scared. The nurse looks down at my chart and was like: “Oh, colon cancer at 35. Man. It really must be the stuff you guys are eating.”

I would like to say it is bizarre, but I think it is probably the most human thing on earth. It is just to want to look at something hard and then just see a little bit past it, because it’s too painful. It is all a pivot to control.

What would you say to someone who says that these efforts to gain control over a situation are actually harmless. Maybe these “reasons” work, as a placebo at the very least.

I think maybe one of the most beautiful things about what the prosperity gospel does is that it helps people set their horizons. I have seen it have a tremendous effect on people, their self-esteem and their joyful expectation that life can give you more. And so in those cases, I am always kind of happy for people.

I think the tricky part is when you have to hold a little more ambiguity about the good things and the bad things. Did you really deserve every wonderful surprise that came your way? And I find the prosperity gospel can be a little overly reductive and make people a bit cruel toward those of us who are not always so lucky.

It is just total audaciousness that we get to pray to God and we expect God to listen and sometimes we expect God to even change his mind. So I love the boldness of it. I have just given up on what happens after I pray. So I just pray boldly for healing and for others, and I think God gives us that dignity in prayer. But I will not measure effectiveness, because I think I can’t.

You have spent most of your career studying the history of Christianity. What did you learn about American Christianity once you got sick?

This is just the country of individualists, endless triumphalists. I did not realize how much the prosperity gospel is just an American theology of divine bootstraps. This is an entire country that does not believe in luck as a fundamental concept. It just assumes that people eventually get what they deserve. And I am really hoping that is not true.

I think the way we talk about illness, cancer, in particular, it’s like you are in a battle. You beat it. That has always struck me as really problematic.

I have tried to embrace it—like, I am a loser; I am absolutely on the losing team. But now I just kind of think, you know, Christianity is on the losing team. Jesus’ life was certainly a bummer. All the “kingdom come” and “not yet” usually focuses on the “not yet,” that we are waiting till God’s reign comes. And in the meantime, we’re going to be on the losing side. So come join me.

Have any of the responses you have gotten from readers surprised you at all?

Maybe the most confirming is that there is absolutely nothing special about a 35-year-old getting cancer. I think the deep tragedy, which I was so grateful to be able to share with others, is that it is so bizarre how hard it is to suffer in this country without other people always trying to explain it away. And it felt so good to get those emails and letters that just said: “I’m in it with you. Life came apart for me, too.”

What group of people do you think needs to hear this message about the prosperity gospel?

I am so grateful for nurses. They are usually on the front lines. If I could create love and community and a little more theological language for a certain profession, I would definitely pick nurses because I love some very much.

Is there a specific nurse that you are especially grateful for?

Oh, my Meg. She looks like a beautiful Anne Hathaway who just sort of floated into the oncology ward.

What does she do well?

She was my age, and Meg just made it seem like it was totally normal that we were in there together and that she was going to be fun and kind and cool. But then in this one little moment, she sat down next to me—and it was in the middle of treatment—and she said it in the lightest way, “I just want you to know I lost a child.” And the way she said it, it was not like she was trying to dump on me. She was just building that bridge; she was communicating that she knew what it was like when everything falls apart and that we were on the same side. I could not be more grateful for the Megs of the world.

Do you think you have become more vulnerable like that in your own interactions?

Yeah, I’m a mess! Absolutely. I picked a profession, academia, where I could study for 15 years and then sort of climb, just keep climbing the career ladder. And my diagnosis knocked me so far down that ladder that it made me realize that this life can only be done together. And we are all going to be trading places in our misery. So you may as well just accept that and open your little heart, or else it is going to be a rougher road.

Everything does happen for a reason. We are just not privy to what the reason is. Also all our prayers are answered, but maybe not in the way we want but what God thinks best. I know this is a cliché but it has to be this way.

An aside: I have met few who have actually envisioned a world where everything we want happens and randomness is not a constant companion. It would be a completely sterile and meaningless world. Faith has meaning only when there is doubt.

Brava to Kate Bowler. She's looking hard things straight in the eye and speaking truth. And thanks to America for talking with her. I had heard of her book before. Time to read it. Thanks so much.

What should a retired pope do? Canon lawyers are proposing laws and guidelines
The resignation of Pope Emeritus Benedict XVI has sparked internal debate over the status and titles of former Popes. One group of canon lawyers and academics are working to draft a ruleset for this navigating papal resignations going forward..
Carol Glatz - Catholic News Service August 12, 2022