Why the Catholic Church cares about sports 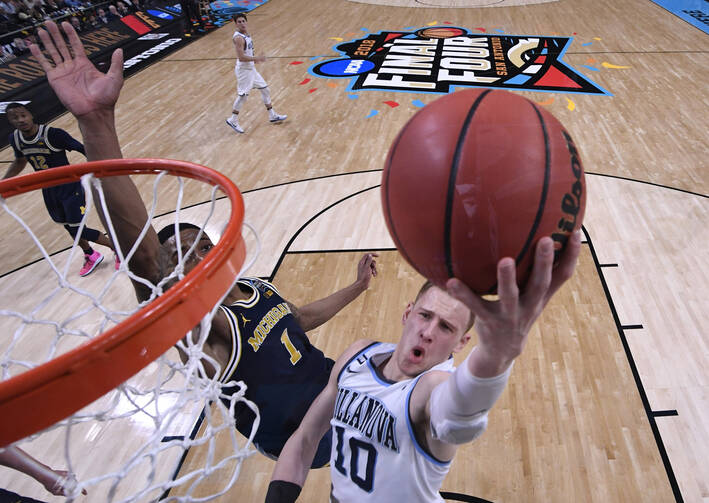 Patrick Kelly, S.J., is one of the experts who contributed to the revision of the first major Vatican document about sports “Giving the best of yourself: A document on the Christian perspective on sport and the human person.” He also participated in the press conference at the Vatican for the release of the document on June 1.

It is well known that Pope Francis, in his speech to fellow cardinals in the general congregation to elect a new pope, recalled the passage from Revelation where Jesus says “Behold I stand at the door and knock.” The image that came to his mind, however, was not typical. He imagined Jesus standing inside the church at the door and knocking wanting to get outside into the world to be with people where they were living their lives.

The church is taking a significant step in this direction with the publication of its first major document about sports. This document attends closely to what happens to the human person in the context of playing sports and asks what leads to his or her integral development or to diminishment and desolation. It also considers the impact of sports on society, the pursuit of the common good and the unity of the human family.

A new Vatican document considers the impact of sports on society, the pursuit of the common good and the unity of the human family.

While the document is outward looking, one of the surprising features for many readers may be the parts about play and sport as a dimension of the cultural and theological heritage of the church. It is important to note that with respect to play and sport as experienced in the history of the church, it is lay people who are the principal actors. Lay people played games and sports on feast days throughout the medieval period, were the students playing sports in the humanist and early Jesuit schools and later Catholic schools and are the players and coaches (and owners) in contemporary contexts in different parts of the world. It is fitting, then, that the document is published by the Dicastery for Laity, Family and Life, which has responsibility for animating and encouraging the vocation of lay people in the church and the world.

The document points out that while sports historians tend to characterize Christian attitudes toward the body as negative, in fact Christians traditionally have emphasized the goodness of the material world and that the person is a unity of body, soul and spirit. The humanist Montaigne is drawing on this tradition when he writes in an essay on education: “We are not bringing up a soul; we are not bringing up a body. We are bringing up a person. We must not split him into two.”

The document also points out that St. Thomas Aquinas had asked in his Summa Theologica, “Can there be a virtue about games?” His answer: “Yes.” For Thomas, virtue was associated with moderation and so working or studying all the time would be excessive. There was a need for play and recreation in a fully human life. This “play ethic” was the central influence on late medieval preaching about games and sports and led the humanists and early Jesuits to provide time for play and sport during the school day and later Catholics to do the same, including in the United States.

The enjoyment a person experiences in play, St. Thomas believed, is directed toward the end of the recreation or restoration of the person.

For Thomas, play is not merely the “pause that refreshes,” however, so that the person can get back to what is really important—that is, work. This would see the value of play in something outside of itself. Rather, he insists that play is engaged in for its own sake. The enjoyment a person experiences in play, however, is directed toward the end of the recreation or restoration of the person.

This heritage is very relevant for the United States because our culture was formed, in part, by the rejection of some of its elements. Since the Puritans began to associate godliness with work, they also began to regard play as trivial and even associated it with sin in a new way. The Puritans eliminated “feast days,” during which people had for many centuries played games and sports. The industrial revolution and the further development of a capitalist economy only strengthened the “work ethic.” It should be mentioned that although this was the dominant trajectory in the United States, several prominent Protestant ministers, historically and more recently, have resisted what they saw as the overemphasis on work and argued passionately for the importance of play.

The problem with the dominant trajectory is that when play itself is not taken seriously, play activities such as sports are vulnerable to being viewed merely as means to other ends.

Pope Francis touched on this kind of problem when he recalled joyful outings in his youth to the football (soccer) stadium, by himself or with his family. The pope told a delegation of Italian football teams that there was an air of celebration about these days and said: “I would hope that football and all other popular sports can take back that element of celebration. Today football also operates within the world of business, marketing, television, etc. But the economic aspect must not prevail over that of the sport; [when it does so] it risks contaminating everything on the international, national and even local level.”

“It is important that sports remain a game!” the pope said. “Only by remaining a game will it do good for the body and spirit.”

“It is important that sports remain a game!” the pope said. “Only by remaining a game will it do good for the body and spirit.”

One way playing team sports does good for the human person is by providing a context within which he or she experiences community. As Pope Francis puts it in his introductory letter to the document: “The need for others includes not only teammates but also managers, coaches, supporters, the family; in short, all those people who, with commitment and dedication, make it possible to ‘give the best of oneself.’ All this makes sports a catalyst for experiences of community, of the human family.... We reach great results, in sports as in life, together, as a team.”

One of the positive dimensions of sport in our internet age is that it provides young people with opportunities for face-to-face encounters while they are engaging in an activity that stirs passions. In such a context, they must learn to exercise self-control and how to manage conflicts within the team.

The document points out that solidarity in the Christian sense needs to go beyond the members of one’s own team, however. Peaceful competitions can be a context for people to have encounters with others very different from themselves and even help them to have a glimpse of the unity of the human family. As Pope Francis puts it, “This is possible because the language of sports is universal; it extends across borders, language, race, religion and ideology; it possesses the capacity to unite people together, by fostering dialogue and acceptance.”

The document also says that because there are human goods associated with sports, all who wish to participate should be able to do so. The document mentions in particular poor or displaced children, physically or intellectually disabled persons and persons without housing and refugees. It also mentions that in some parts of the world girls and women are not allowed to participate in sports and thus cannot experience the joy and benefits of such activities. It points to the Special Olympics and the Paralympics, as well as the Homeless World Cup and the creation of a Refugee Olympic Team in 2016 as signs of hope with regard to creating a culture of inclusion in sports.

It's interesting to note the lack of a differential between sports as play and sports as incredibly organized. The first may be beneficial to the complete person such as joining a bowling or softball league. ( See. You laughed) Jogging and walking have the obvious benefit of enhanced health. The organized sports of high school, college , and professional are much more observational than participatory and are not of as much value especially as the size and money of the programs increase. ( Think Enormous State University) Play is where one learns to deal with others and resolve conflicts. Organized sports on higher level is more of the jockocracy than anything. I believe the reason it is so very well admired is almost solely due to the opportunities for networking which are provided. So just say it, then! ( Unless you're a betting person of course. And now more than ever.) "Molding character" is a way of saying "fund raising". The lure of sports as an end result and not as a part of personal growth is an ongoing problem. (Yeah, I know, Boosters have lots of $$$$$ so my argument is invalid.) One wonders if there is any type of school spirit beyond sports. If not then too bad. It's like when the adults gain control of play, they tend to wreck it.

I suggest everyone google

Mike Kerrigan: I thought I had enough friends, then a stranger did this on my flight home

to see an inspirational story about exercise, sports and others.

Sports - is life in full flow. Bring it on.

The Church would definitely argue for relaxing entertainments on Sundays, as sports activities are top for the body and the complete person. As recreation includes community with competition and/or teammates, Essay Writing Services it would seem to be very fitting activity for Sunday.

There may be benefits to sports but I'm sceptical of the physical benefits. I know too many high school football players now in their sixties with spinal problems. All those injuries finally catch up, not to mention the long term effects of head injuries. Then there're the lateral stresses on the knee in tennis. The total asymmetry of golf motions can't be good. Look at Woods. Let's face it, the goal of sports is not physical fitness but physical effort and physical sacrifice to put the ball in the thing. Now exercise, that's different. It's performed within limits and is controlled. It improves physical health. There may be goods in sports, but physical well being may not be one of them.