'Can it Be?' The Christmas pairing of Bing and Bowie 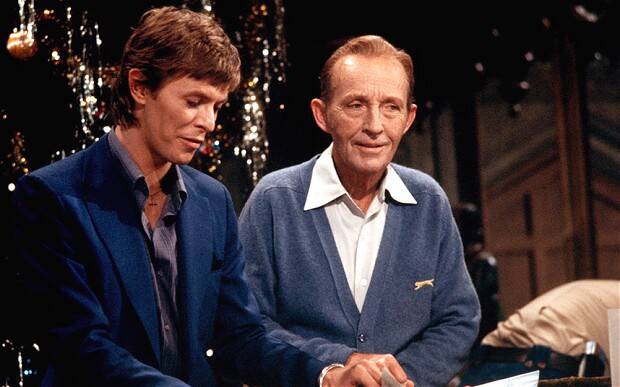 When I woke up this morning to the news that rock legend David Bowie died, I couldn’t believe it. This came on the heels of the death of another musical legend, Natalie Cole, daughter of her “unforgettable” father, Nat King Cole. The former David Robert Jones had inhabited the rock universe for some four decades and in that time he managed to make his musical mark across various genres. He had been ill for almost two years, fighting what turned out to be a losing battle with cancer. He was 69 years old when he died, and that particular birthday occurred just last Friday.

Musicians—indeed, everybody who is ever famous—are just as human as the rest of us and they, too, are prone to human faults and frailties. With celebrities, though, you somehow believe that they’ll go on forever. We know of course, that isn’t the case. But when it happens it is still a shock.

Naturally, all the television reports gave the details of a rocker’s life; there is no need to detail that here. But when I heard the news, it brought me back some years to a time when David Bowie once went outside of his “comfort zone” and made musical history with someone who wasn’t of his time: Bing Crosby.

The date was Sept. 11, 1977, when Bing Crosby was taping his annual Christmas special for CBS. He was in England in a studio just outside of London. It was the Elstree Studios to be exact and the program he was taping was to be called Bing Crosby’s Merrie Olde Christmas and it was to be as the title implied: an old-fashioned English Christmas. Bing had the show all planned with his writers; but he wanted something different for this show. He wanted a young person to appear with him. Somehow or other, David Bowie was suggested and feelers were put out for having him appear with Bing on the show. They were both musicians of note and both were in London and if it were to come off, it could make for an interesting musical paring. One of the show’s writers/producers, Alan “Buz” Kohan, was not sure if Der Bingle knew who David Bowie was; but as fellow writer Ian Fraser said at the time, “I’m pretty sure he did. Bing was no idiot. If he didn’t his kids sure did.”

And Bing’s kids surely knew who David Bowie was. The entire Crosby family were there for the show’s taping; and when they saw David Bowie and his wife appeared, they were almost speechless. As Mary Frances Crosby—Bing’s daughter—recalled: “The doors opened and David walked in with his wife. They were both wearing full-length mink coats, they have matching full makeup and their hair was bright red…We were thinking, ‘Oh my God.’” And as one of Bing’s sons, Nathaniel recalled: “It almost didn't happen. I think the producers told him to take the lipstick off and take the earring out. It was just incredible to see the contrast." Somehow, David Bowie was persuaded to tone down his “extravagance,” for he was in his “Ziggy Stardust” phase. The young rocker made a presentable appearance for the sake of the crooner of yesteryear.

Bing might have been open to the idea of appearing with a prince of rock, but it wasn’t exactly reciprocated. The song selected for them to sing, “Little Drummer Boy,” wasn’t the kind of song Bowie liked—or wanted to sing. Said he: “I hate this song. Is there something else I could sing?” And: “I’m doing this show because my mother loves Bing Crosby.”

With time of the essence, Bowie and the writers came up with a song just for Bowie to sing, as a counterpart to Bing and “The Little Drummer Boy.” The result was “Peace on Earth,” which Bowie sang while Bing sang the song Bowie didn’t care for. And the result was mesmerizing, for the old crooner and the young rocker did something magical: through the meshing of two Christmas songs, one traditional and one just newly written within the space of an hour, they created a new Christmas hit; it is still heard all these years later when Christmastime comes around.

It was a remarkable moment in music history and when the show aired on November 30, 1977; it proved to be Bing Crosby’s last musical testament; for he had died some five weeks after taping that Christmas special, on October 14, 1977—he expired on a golf course in Spain, having hit a “hole in one” at the age of 73. The man who began his career singing “Where the Blue of the Night Meets the Gold of the Day” died in good spirits and his “co-star,” David Bowie, would go on to bigger and greater renown before he, too, expired.

I remember that Christmas special, for I was 16 years old at the time. I was mesmerized by what these accomplished and professional musicians did, the aging crooner and the young rocker; and it taught me something that evening. I learned that there is much we can learn from each other, the older generation and the younger generation; the gulf between the two isn’t all that wide. (Even Bing had nothing but praise for his collaborator, saying that David Bowie was "a clean-cut kid and a real fine asset to the show. He sings well, has a great voice and reads his lines well.") Coming together through a little music can bridge many a difference and a wonderful harmony can be created between two human beings. As both Bing and David both plaintively sang in the chorus to their collaboration: “Can it be?”

The answer is: Yes, it can. Take a moment and watch the YouTube clip and give thanks that Bing and David came together that time to create some holiday sparkle and a magical Christmas memory.