Will Catholics join evangelicals in the culture war? 7 questions to understand the 2022 midterms 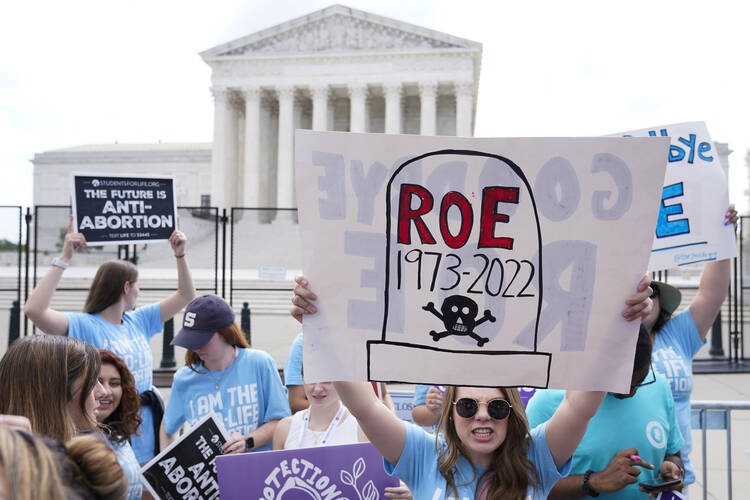 Demonstrators protest about abortion outside the Supreme Court in Washington, June 24, 2022.Nothing has undermined the GOP's momentum more than the Supreme Court's stunning decision to end abortion protections, which triggered a swift backlash even in the reddest of red states over the summer. (AP Photo/Jacquelyn Martin, File)

This year’s midterm elections, which take place on Nov. 8, are more difficult than usual to predict. History suggests a strong vote against the party in the White House, but we may not see a repeat of the “shellackings” given to two previous Democratic presidents, Barack Obama and Bill Clinton, two years after they were elected. One reason is that Joe Biden didn’t carry many new Democrats into Congress with him on an electoral wave in 2020, so there aren’t many to get pulled back into the sea with the tide; another is that there are fewer and fewer swing voters who switch parties from one election to the next.

Current polls suggest that the Democrats will hold onto the U.S. Senate by one or two seats and may even keep control of the House of Representatives—but some pollsters, burned by recent elections in which Republicans did better than expected, are not sure of what they are seeing.

In our current polarized environment, even a small shift could determine whether the Democrats or Republicans can claim victory.

As a large voting bloc that is “split down the middle politically” (according to the Pew Research Center), Catholics have an outsized role in determining this year’s results. They are unlikely to break heavily toward one party or the other, but in our current polarized environment, even a small shift could determine whether the Democrats or Republicans can claim victory (and momentum toward the 2024 presidential election). The following are seven questions about Catholic voters, and U.S. voters in general, that may be answered on Nov. 8.

[Subscribe to the “Voting Catholic” podcast from America Media for all-new episodes on inflation, abortion and gun violence. These episodes are now available on Apple Podcasts, Spotify and other podcast apps.]

1. Will abortion remain a top issue for Catholics and other voters? Abortion was the second most frequently cited issue, behind inflation, as being at the “top of mind” when thinking about this year’s election, according to a September NPR poll; it was chosen by 22 percent of all respondents and 35 percent of Democrats (but only 10 percent of Republicans). Political analysts have noted that the Democrats began doing better in polls—and in special congressional elections—right after the Supreme Court, thanks to Republican-appointed justices, overturned Roe v. Wade on June 24 and returned the issue of legal abortion to the states.

The Dobbs decision was a huge political story over the summer (it’s hard to believe it happened only three months ago), and it was largely framed as a sweeping victory for the pro-life movement, perhaps fueling a backlash among voters—in the same way that presidential election victories usually lead to a backlash against the winning party in the next midterm election. That backlash could last all the way through November, but the Democrats could also overplay their hand, opposing limits on abortion (such as those in the third trimester) that are supported by most U.S. voters and looking more extreme on the issue.

While most polls show that Catholics are not too far from the U.S. population as a whole on the issue of abortion, there seem to be a significant number who differ from their own party on the issue.

Also of note: There will be referendum questions involving abortion in five states this fall (California, Kentucky, Michigan, Montana and Vermont), following the Kansas election in August in which voters declined to remove the right to an abortion from their state constitution. The results of these referenda will help shape the political narrative on abortion, and Catholics will be particularly important in California, where voters will decide whether to add the “right to choose to have an abortion” to their constitution, something the state’s bishops are mobilizing against.

[Also see: “Can a pro-life and a pro-choice Catholic find common ground? We gave it a shot.”]

2. Will immigration be a winning issue for Republicans? Immigration may be the reason that only 10 percent of Republicans chose abortion as the their most important political issue in that NPR poll: 22 percent of the Republicans said immigration is most important, compared with 9 percent of Democrats and 8 percent of independents. That number may rise even higher with the news that unauthorized crossings of the U.S.-Mexico border are setting records, with the Border Patrol on track to make more than 2 million arrests for the fiscal year that ended on Sept. 30.

In an NBC News poll, 56 percent of voters said that the Republicans do a “better job” at addressing border security, compared with 20 percent who said the same of Democrats, so the GOP has an incentive to keep the issue in the public eye—and to continue spending millions to transport migrants to Democratic states.

But will the issue resonate in the same way with voters in all 50 states? Attitudes toward immigration vary across demographic and geographic groups, so the issue may benefit each party in different places. (In a 2020 poll by the Public Religion Research Institute, 59 percent of white evangelical Protestants agreed with the statement that “immigrants are invading our country and replacing our cultural and ethnic background,” compared with 33 percent of white Catholics and 23 percent of Hispanic Catholics.) Will Catholic voters in Florida and Texas, states with rapid population growth because of both immigrants and migrants from other states, take a harder line against immigration than Catholic voters in slow-growth states like Pennsylvania and Wisconsin, which depend more on immigrants (see “How immigration affects the three Americas”) to sustain local economies—and to fill churches?

[Also see “The majority of Americans think migrants are ‘invading’ the U.S. Meanwhile, suffering at the border continues.”]

3. Will gun violence matter to voters? At the beginning of the summer, with the mass shooting at an elementary school in Uvalde, Tex., still in the headlines (thanks in part to questions about the police response there), it seemed possible that gun violence would be the political issue of the year. The FiveThirtyEight/Ipsos poll has tracked the three most important issues on the minds of U.S. voters, and a peak of 42 percent included gun violence in their answers as of June 22—two days before the Dobbs decision had everyone talking about abortion.

The June 25 signing of a bipartisan gun bill to prevent certain categories of people from accessing firearms may have eased any pressure to elect candidates more willing to address gun violence this year. One test will be how well Beto O’Rourke, a Democrat and a Catholic, does in his uphill fight to unseat Greg Abbott, the Republican governor of Texas who is also Catholic. Mr. O’Rourke has been especially critical of Mr. Abbott on gun policy and on the state and local responses to the Uvalde shooting.

[See: “‘They are traumatized’: How Catholic Charities is responding to Uvalde after the shooting.”]

4. Will inflation make a comeback? Earlier this year, rising food and fuel prices seemed to spell doom for the Democrats, but the political effects of inflation have been more uncertain lately. Gasoline prices are down for now, but overall inflation is still not under control, and it was still cited as this year’s most important political issue by 30 percent of voters in the September NPR survey. If the Biden administration releases one or two more bad economic reports before the election, all the talk about abortion, immigration and guns may not matter as much as some of us thought.

5. Will Hispanic voters continue their shift toward the Republican Party? The biggest surprise of the 2020 presidential election was how well Donald J. Trump did with Hispanic voters. According to the Pew Research Center, he got 38 percent of their votes, up from 28 percent four years before, a shift that helped Mr. Trump to keep Florida and Texas in his Electoral College column. It is too early to say whether this trend will hold; Hispanics have shown a tendency to support the party in the White House, so it would not be a surprise for the Democrats to regain some of their votes in 2022 and 2024.

But a continued shift toward the Republican Party would be consistent with the increasing share of Hispanics who identify as evangelical Protestants. “With this realignment of their faith,” wrote Mya Jaradat in the Deseret News last year, “comes a realignment of their political affiliation: Evangelicalism’s emphasis on a personal, unmediated relationship with God—independent of institutions—and individual rather than systemic responsibility that closely dovetails with Republican and conservative thinking.”

7. Will Catholic voters split their tickets? Ticket-splitting, or voting for candidates from different parties for different offices, has become much less common over the past couple of decades—in contrast to the late 20th century, when voters frequently chose, say, a Republican president and a Democratic senator at the same time. Since Catholic social teaching does not align exactly with either party, both Democratic and Republican candidates frequently hope that Catholic voters will cross party lines to support them. Will that happen in large numbers this year?

Two states with large Catholic populations to watch are New Hampshire and Ohio; in both, popular mainstream Republican governors are running on the same ballot as Republican candidates for senator who are allied with Mr. Trump (Mr. Vance in Ohio and Don Bolduc in New Hampshire). One issue that may factor into ticket-splitting is immigration: In Ohio, Gov. Mike DeWine has been welcoming toward refugees, while Mr. Vance, his fellow Republican, has taken a more hardline stance, saying in an interview last year, “I think we sometimes let in people into the country that don’t make great Americans.”

[See “Republicans and Democrats agree that democracy is in trouble. They just don’t agree on its definition.”]