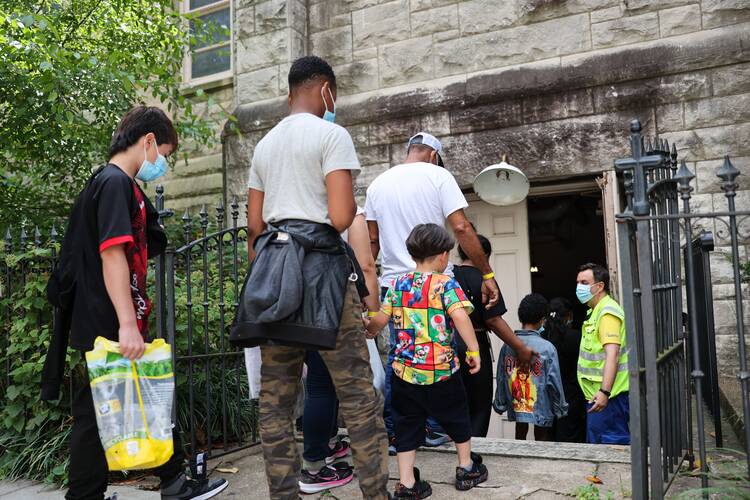 Migrants who arrived on a bus from Arizona step into the parish hall at St. Peter's Church on Capitol Hill in Washington Aug. 5, 2022. The local church, partnering with SAMU First Response, began offering hospitality in late July to migrants arriving on buses sent to Washington by the governors of Texas and Arizona. (CNS photo/Andrew Biraj, Catholic Standard)

Religious and nonprofit groups on the vacation resort of Martha’s Vineyard, Mass., mobilized Thursday morning, after 50 migrants arrived from Texas, an unexpected development courtesy of a Republican governor seeking to make a political statement about the situation at the U.S.-Mexico border. The migrants, who largely hailed from Venezuela, were given lodging at a local Episcopal church, and a nearby Catholic church has offered additional space should more arrive, the Vineyard Gazette reported Thursday.

The surprise arrival of migrants to Martha’s Vineyard, an upscale vacation destination, is the latest episode in a monthslong effort by at least three Republican governors—Greg Abbott of Texas, Doug Ducey of Arizona and Ron DeSantis of Florida—to send those seeking asylum at the southern border to politically liberal locations. As migrants arrive in Washington, New York and Chicago, Catholic leaders have been on hand in each city to welcome them.

Gov. Abbott announced on April 6 that his state would charter buses to send migrants entering from Mexico to “the steps of the U.S. Capitol.” Since then, Gov. Ducey created his own plan to do the same and began busing migrants last month. Together, the two states have sent more than 10,000 migrants seeking asylum to locations that have deemed themselves “sanctuary cities.”

Archbishop Thomas Wenski of Miami released a statement that called leaders to recognize the “broken” immigration system as “a fundamental human and moral issue.”

For his part, Gov. DeSantis used money allocated by the Florida legislature to fly migrants to Massachusetts on Wednesday evening, his office said Thursday. Archbishop Thomas Wenski of Miami released a statement dated Sept. 15 that called leaders to recognize the “broken” immigration system as “a fundamental human and moral issue.” While Archbishop Wenski has a long record of advocating for the rights of migrants, his statement did not explicitly mention the relocations.

Branches of the Catholic Charities network in these cities are struggling to process the wave of new clients in addition to carrying out their usual work. But partnerships with governmental and nongovernmental organizations are helping manage the rapidly evolving crisis.

Beginning in April, Washington, D.C., became the first city to receive busloads of migrants from Texas and Arizona, and the nation’s capital has taken in the highest number by far. Mayor Muriel Bowser’s office said 9,400 migrants have arrived from the two border states.

Branches of the Catholic Charities network in these cities are struggling to process the wave of new clients in addition to carrying out their usual work.

Catholic Charities was one of the first organizations in action at Union Station in Washington, D.C., to welcome the migrants, who arrived during Holy Week.

Sharlet Ann Wagner, C.S.C., the executive director of the Newcomer Network, a project of Catholic Charities of the Archdiocese of Washington, organized welcome crews for the buses in conjunction with other agencies.

“We met them the first three days—Wednesday, Thursday and Friday—and then other organizations stepped in and helped,” including D.C.-based nonprofit SAMU First Response, Sister Wagner told America.

Throughout the summer, Sister Wagner said, Catholic Charities D.C. began to focus on case management as partner organizations took over greeting and sheltering duties. About 85 percent of the migrants have left the city for other parts of the country, but the 15 percent who remain continue to work toward asylum status. The Newcomer Network offers services to help them achieve that.

“We couldn’t just drop the people we were serving in order to do this. And so staff were continuing full-time, serving the people we’d been serving and meeting the buses on top of it.”

The biggest challenges have been logistical, Sister Wagner said, especially for those who plan to stay local. Emergency provisions for food and shelter are already strained. Migrants who remain cannot continue to live in temporary hotel quarters offered by the city of Washington, D.C., and Montgomery County, Md.

“We couldn’t just drop the people we were serving in order to do this. And so staff were continuing full-time, serving the people we’d been serving and meeting the buses on top of it,” she said.

In New York, nearly 2,000 migrants have arrived at Manhattan’s Port Authority in just the past month. City officials say the shelter system has been under strain since the spring. Mayor Eric Adam’s office reported last month that approximately 4,000 new immigrants entered shelters from April to August.

“These are people with names, and with dads and moms. These are husbands and wives and kids, and we love them. And we welcome them.”

Cardinal Timothy Dolan, archbishop of New York, held a press conference on Aug. 16, affirming his commitment to assisting the migrants.

“These are people with names, and with dads and moms,” Cardinal Dolan said. “These are husbands and wives and kids, and we love them. And we welcome them.”

Msgr. Kevin Sullivan, the executive director of Catholic Charities of New York, was also in attendance to speak on his agency’s response.

“Even though this surge is unprecedented, and yes, there have been glitches understandably caused by this crisis, [Catholic Charities of New York] has never shirked from accepting their responsibility to provide shelter as a right for those in New York City,” he said.

Cardinal Dolan added that the workers at the agency are “old hands at this and used to doing this with respect and efficiency.”

Maryann Tharappel, a Catholic Charities attorney, said at the press conference that such practices steeply increase the likelihood of deportation for these migrants.

“​​These are not residential addresses. These are not spaces that are able to accommodate these immigrants. And worse, the government is assuming that these are addresses that they can receive mail at…about their court cases, about upcoming deadlines,” she said. “These are clients we have never encountered.”

“There was quite a bit of preparation on the ground already in place before we saw the first buses arrive.”

Chicago, meanwhile, is the most recent major city to receive migrant buses, with the first wave of migrants arriving on Aug. 31. Phil Zepeda, the vice president of communications for Catholic Charities Chicago, told America that the agency has processed roughly 500 migrants during the last two weeks.

Chicago’s Catholic Charities agency has worked alongside partner organizations that focus on extended food and shelter. Marie Jochum, the senior director for special projects, told America that the charity network in Chicago benefitted from seeing the response in Washington, D.C., and New York.

“We know this is coming, how are we going to be prepared?” Ms. Jochum recalled thinking. “There was quite a bit of preparation on the ground already in place before we saw the first buses arrive.”

“The work at Catholic Charities is always accompaniment. It’s always showing up for families and individuals, and saying: How can we help you on the next step of your journey?”

Ms. Jochum said her branch operates an intake shelter, staffed with bilingual social workers, where migrants can get an initial meal and shower before making more longterm plans. She credited local parishes in the Archdiocese of Chicago for their strong support in helping to provide shelter and greet migrants.

Both Ms. Jochum and Mr. Zepeda emphasized the importance of flexibility, as various agencies are asked to pitch in as needs arise.

Bishop Edgar M. da Cunha, head of the Diocese of Fall River, which includes the island, said in a statement on Friday that local Catholic Charities agencies are readying to help the migrants, some of whom left Martha’s Vineyard for another location on Cape Cod.

“These newcomers to our area have endured a difficult journey and the challenges they face are many. Our welcome to them must be marked by respect and compassion and be coupled with our prayers for them in the weeks and months ahead,” Bishop da Cunha said.

“The work at Catholic Charities is always accompaniment. It’s always showing up for families and individuals, and saying: How can we help you on the next step of your journey?” Ms. Jochum said. “Whether that’s the Venezuelan migrants or someone else who walks into one of our services, we’re doing what we do every day.”