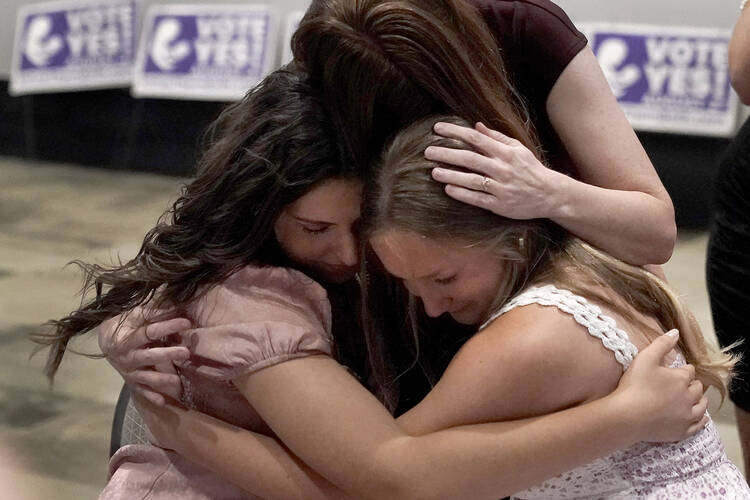 Hannah Joerger, left, Amanda Grosserode, center, and Mara Loughman hug after a Value Them Both watch party after the failure of a referendum to remove the right to abortion from the state constitution, on Aug. 2, 2022, in Overland Park, Kan. (AP Photo/Charlie Riedel)

Pro-lifers could be forgiven for being a bit overconfident going into Tuesday’s election in Kansas that included a referendum on whether the state constitution should guarantee a right to abortion.

After all, Kansas has one of the deepest hues of the so-called red states and is certainly among the more pro-life places in the United States. Furthermore, in 2020 the pro-life state of Louisiana passed a similar ballot measure by the overwhelming margin of 61 percent to 38 percent.

Why shouldn’t we have expected that, especially with all the momentum after the Dobbs decision, pro-lifers in Kansas would have voted like pro-lifers in Louisiana? The only way that pro-life Kansans could move to pass their preferred laws supporting prenatal justice—only now possible after the fall of Roe vs. Wade and Casey vs. Planned Parenthood—was to find a way repudiate a state court’s decision that abortion is a fundamental right under the Kansas constitution. Without passing last night’s ballot measure, pro-life Kansans knew that their state would instead become a bastion of abortion extremism, including abortion tourism from nearby states with more restrictive abortion laws. Obviously, they did not want to touch anything like that with a 10-foot pole.

I have seen many pro-lifers respond with surprise and even anger at what appears to them to be a profoundly strange result.

But the measure failed, 59 percent to 41 percent.

I have seen many pro-lifers respond with surprise and even anger at what appears to them to be a profoundly strange result.

Abortion activists knew that, when Roe and Casey fell, they needed to be ready to strike a blow in an attempt to galvanize public opinion against prenatal justice. Unlike the ballot measure in Louisiana, the referendum in Kansas was nationalized, and abortion activist money from around the country provided the resources to flood the state with advertisements and get-out-the-vote campaigns.

The referendum in Kansas was nationalized, and abortion activist money from around the country provided the resources to flood the state with advertisements and get-out-the-vote campaigns.

This effort was particularly effective when it came to planting deeply sympathetic (if at times misleading and even false) media stories about women whose lives would be put at risk by laws protecting prenatal justice. But the data clearly show that there is not necessarily a connection between pro-life laws and a drop in maternal health. Indeed, countries like Ireland (at least in the decades leading up their recent abortion legislation) and Catholic hospitals across the United States prove that one can refuse to do elective abortions and have great health outcomes for women—even better outcomes than countries and hospitals that welcome elective abortions.

Nevertheless, our opponents mounted an impressive public relations operation that produced an equally impressive result: an astonishing abortion rights victory in the heart of pro-life country. The game plan that led to this victory will no doubt be used again and again in the coming months and years as the post-Dobbs abortion battle turns to the states in earnest.

It must be said that pro-lifers have been caught flat-footed, perhaps never really believing that Roe and Casey would fall. Given that game plan used by abortion activists in Kansas was previously used to dishonestly undermine Ireland’s beautiful constitutional tradition in favor of prenatal justice a decade ago, it is puzzling why pro-life activists have seemed so unready for its execution. Perhaps the recent success in Louisiana, coupled with groupthink created by “the big sort” and social media algorithms reinforcing one’s biases, gave pro-lifers a false sense of security—especially in a relatively pro-life state like Kansas.

But pro-lifers must face something else: This is about more than just losing out to dishonest folks with more money and a better ground game. It is also about the fact that abortion bans in the early first trimester (which may indeed have come to Kansas if the ballot measure passed) are simply unpopular, with about six in 10 supporting legal abortion at that stage of a pregnancy. On the other hand, decade in and decade out, Gallup finds that about seven in 10 Americans want abortion banned after 12 weeks.

With a certain amount of state-by-state flexibility, this is where pro-lifers need to live in terms of the legislation we propose and support. Furthermore, we need to make our model legislation absolutely clear—one million percent clear—that physicians can do whatever is necessary to save the mother’s life. Period.

I get that even if such clear language is added to the legislation there will continue to be dishonest players who will pathologize pregnancy itself in ways that suggest that any laws restricting abortion will kill women. But those extremists, who simply don’t understand (or willfully ignore) the fact that almost every civilized country in the world has substantial protections for prenatal children in law (many with great outcomes for women), do not decide elections. To reach other voters, pro-lifers need to have a laser focus on protecting women. Period.

I do not want to say that the defeat of the Kansas ballot measure was a good thing, but it could perhaps be turned into a good thing if it serves as a wake-up call to the pro-life movement as to the kind of struggle that comes next—indeed, which is already here.

If you are a pro-lifer who was lulled into a false sense of security post-Dobbs, that is officially and obviously over. It is now time to work harder and smarter by leaving absolutely no doubt that pro-lifers are committed to protecting and supporting both mothers and their prenatal children. Let’s get to work.

Charles C. Camosy is a professor of medical humanities at the Creighton University School of Medicine and holds the Monsignor Curran Fellowship in Moral Theology at St. Joseph Seminary in New York. He is the author of seven books, including, most recently, Bioethics for Nurses.