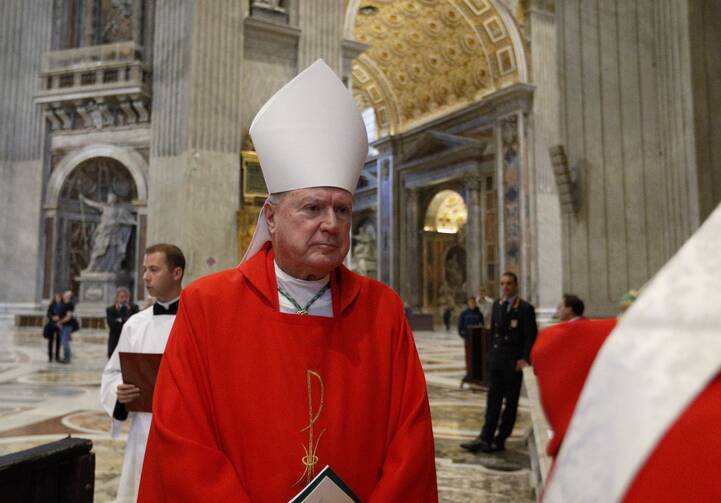 Bishop Robert J. McManus of Worcester, Mass., arrives with other U.S. bishops from the New England States to concelebrate Mass in the crypt of St. Peter's Basilica at the Vatican Nov. 7, 2019. (CNS photo/Paul Haring)

A standoff between a Jesuit middle school and the bishop of Worcester, Mass., where the school is located, escalated Thursday, after Bishop Robert J. McManus stripped the “Catholic” moniker from the school over its decision to continue flying flags supporting L.G.B.T. pride and Black Lives Matter.

“The flying of these flags in front of a Catholic school sends a mixed, confusing and scandalous message to the public about the Church’s stance on these important moral and social issues,” states a decree issued on June 10 and signed by Bishop McManus. The ruling was posted to the diocese’s website on Thursday.

Thomas McKenney, president of the Nativity School of Worcester, wrote in a letter to the school’s community that the school would continue to fly the flags as it appeals the bishop’s decision though church channels.

“As a multicultural school, the flags represent the inclusion and respect of all people,” Mr. McKenney wrote. “These flags simply state that all are welcome at Nativity and this value of inclusion is rooted in Catholic teaching.”

The Nativity School of Worcester, founded in 2003, offers tuition-free education for boys from economically disadvantaged communities. Affiliated with the Jesuits, the school receives no financial support from the Diocese of Worcester and instead relies on donations and grants. According to the school’s website, the student body is comprised of 61 boys, in grades five through eight, most of whom are people of color.

“The flying of these flags in front of a Catholic school sends a mixed, confusing and scandalous message to the public about the Church’s stance on these important moral and social issues,” a decree said.

In January 2021, students requested that the school fly a rainbow flag to show support for the L.G.B.T. community and another to support Black Lives Matter. According to the school, the flags remained up for more than a year before the bishop requested they be removed. Shortly after that request, the flags were torn down in an act of vandalism, but the school replaced them.

At issue is what the flags are perceived to symbolize.

Bishop McManus wrote in the decree that the pride flag connoted support for same-sex marriage, which the Catholic Church opposes, and for “actively living a LGBTQ+ lifestyle.”

As for the Black Lives Matter flag, the bishop wrote that “the Catholic Church teaches that all life is sacred and the Church certainly stands unequivocally behind the phrase ‘black lives matter’ and strongly affirms that all lives matter.”

But, he continued, the movement associated with Black Lives Matter “promotes a platform that directly contradicts Catholic social teaching on the importance and role of the nuclear family and seeks to disrupt the family structure in clear opposition to the teachings of the Catholic Church.”

The school offered a different interpretation of the flags in explaining why it would continue to let them fly, citing the pope’s support for L.G.B.T. Catholics and overtures from the U.S. Conference of Catholic Bishops indicating support for the Black Lives Matter movement.

“Both flags are now widely understood to celebrate the human dignity of our relatives, friends and neighbors who have faced, and continue to face hate and discrimination,” Mr. McKenney wrote. “Though any symbol or flag can be co-opted by political groups or organizations, flying our flags is not an endorsement of any organization or ideology,” he said, adding that “they fly in support of marginalized people.”

In Bishop McManus’s decree, he cites that in refusing to remove the flags, which he first requested earlier this year, the school’s leaders “disregard[ed] my legitimate authority as the guardian and overseer of Catholic education.

“This leaves me no other option but to take canonical action,” he continued.

In addition to no longer being able to describe itself as Catholic, the school is not permitted to celebrate Mass on its premises, is barred from engaging in fundraising with diocesan organizations and must remove a previous Worcester bishop from its board of directors.

The move by Bishop McManus to strip the Nativity School of its Catholic label mirrors a similar situation that played out three years ago.

In Bishop McManus’s decree, he cites that in refusing to remove the flags, the school’s leaders “disregard[ed] my legitimate authority as the guardian and overseer of Catholic education.

In June of 2019, Archbishop Charles Thompson of Indianapolis decreed that Brebeuf Jesuit Preparatory School could no longer call itself Catholic after it refused to fire a teacher who had married his same-sex partner. The school appealed to Rome, and a few months later, in September 2019, the Vatican said that the decree would not go into effect while it investigated. No ruling has been made public, and the school’s website still describes itself as a “Catholic Jesuit school with daily Mass.”

On March 29, the Vatican’s Congregation for Education released a document titled “The Identity of the Catholic School for a Culture of Dialogue,” which states that individuals charged with hiring faculty and staff for Catholic schools must make clear to prospective employees the implications of working for a Catholic institution.

Those individuals should “inform prospective recruits of the Catholic identity of the school and its implications, as well as of their responsibility to promote that identity,” the document states.

It did not, however, highlight Brebeuf or any other specific cases in which a school or its employees clashed with church officials.

This is not the first time Bishop McManus has clashed with a Catholic school in his diocese over L.G.B.T. issues.

In 2019, he delivered remarks at a Catholic health care conference in which he said church teaching is at odds with the movement to support the rights of transgender people.

Administrators at the Jesuit-run College of the Holy Cross, which is located in Worcester and has connections to the Nativity School, responded by calling his remarks “deeply hurtful and offensive.” That prompted a reply from the bishop, who repeated his call that all people, including those who are transgender, be treated with compassion and respect. But he stood by his remarks.

“If certain members of the Holy Cross community find this to be hurtful and offensive, then perhaps the college should present clearly what Catholicism teaches regarding Christian anthropology and human sexuality,” he said in 2019.