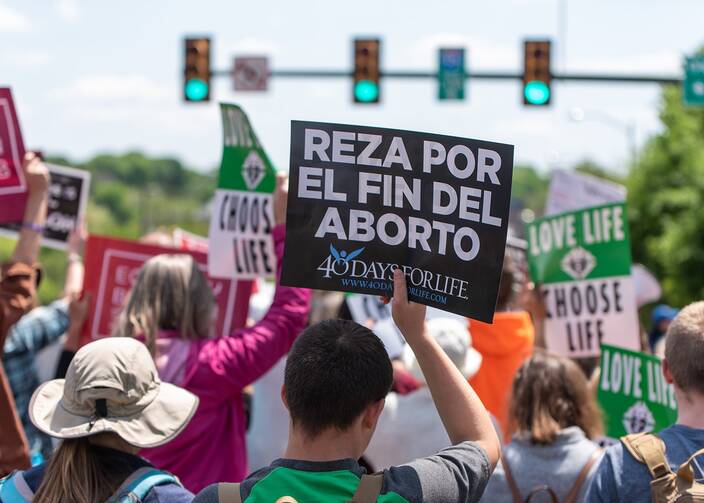 A participant in the fourth annual Virginia March for Life in Richmond, Va., on April 27, 2022, carries a sign in Spanish reading "Pray for an end to abortion." (CNS photo/Michael Mickle, The Catholic Virginian)

A new survey from the Public Religion Research Institute hints at what could be a major swing in Latino Catholic views on abortion. According to this poll, 75 percent of Hispanic Catholics say abortion should be legal in “most or all cases,” up from 51 percent in a P.R.R.I. poll in 2010.

According to this poll, 75 percent of Hispanic Catholics say abortion should be legal in “most or all cases,” up from 51 percent in 2010.

The P.R.R.I. results are not conclusive, as researchers acknowledged that small sample sizes make it more difficult to determine statistically significant differences among the minority populations surveyed. (The study reached 2,038 individuals overall, 104 of whom identified as Hispanic Catholics.) But the 24-point shift among Hispanic Catholics in at least this one poll raises the question: Are views on abortion changing in the Latino community?

Conversations with Latino and pro-life leaders revealed at least three reasons to be cautious about the poll results and suggested where discussions about abortion need to go next.

Do Latinas see abortion as a women’s rights issue?

Whether Latino and Latina views on abortion are changing is not a simple question to answer, according to Gina Vides, the associate director of parish and community leadership for the Los Angeles Archdiocese’s Office of Life, Justice and Peace.

“I don’t want to say that they’re ‘for’ abortion, because that’s not the case,” she said. Many Latinos in California, she explained, are reluctant to say they’re “pro-life” because they associate the term with the Republican Party, which is unpopular in this state. But that does not mean they agree with Democrats in California who talk about abortion access as a women’s empowerment issue.

“If you ask young Latinas what empowerment means to them, I guarantee the answer isn’t abortion.”

“If you ask young Latinas what empowerment means to them, I guarantee the answer isn’t abortion,” she said. “They’ll say [it] means the opportunity to go to school, to work, to make a fair wage above minimum wage so that one day you can own a home, you can have your own family, you can be independent. That’s what I’ve learned that our communities want. That has nothing to do with abortion.”

Does a single poll indicate a permanent shift in opinion?

Another reason to view the new P.R.R.I. poll with caution is that the supposed shift in attitudes toward abortion among Hispanic Catholics has not been steady. In fact, it seems to have occurred only in the past couple of years, when abortion has become more politically polarized than ever. As late as 2019, P.R.R.I. reported 52 percent of Hispanic Catholics saying that abortion should be illegal in “most or all cases.”

As late as 2019, P.R.R.I. reported 52 percent of Hispanic Catholics saying that abortion should be illegal in “most or all cases.”

“I don’t doubt that there has been a real shift, but it may not be as large as the numbers make it look like,” said Ken Johnson-Mondragón, the director of pastoral engagement for the California Catholic Conference.

“I was at a training for Pastoral Juvenil [Hispanic youth ministry] over the weekend, and the folks I was talking to were expressing very pro-life convictions. But they were saying, ‘We are outliers. We’re having a hard time talking to our peers who see things differently,’” he said.

Mr. Johnson-Mondragón believes that the frenzy of media coverage following the reversal of Roe likely boosted pro-choice numbers, at least for now. But he also noted recent signs of Latinos leaving the Democratic Party, which would seem to contradict the P.R.R.I. study’s findings about growing pro-choice views in the community.

Has the abortion conversation just been rebooted?

Overall, Julie Fritsch Dumalet, the director of the pro-life office for the Archdiocese of Galveston-Houston, found the survey findings surprising. Ms. Dumalet did say, however, that she was recently invited to speak to a young adult group at a largely Latino parish where members were at odds about abortion. (More than 70 percent of Catholics under 30 in her archdiocese are Latino.)

“It is something people are talking about,” she said. “How do I feel about this now that there's more freedom on the part of the state to ban this procedure outright? A lot of people are getting involved in this conversation, and they didn’t feel like they needed to before.”

In 1973, Roe v. Wade “rudely interrupted” a national debate that was taking place about abortion, according to Andrew Rivas, the manager for public policy and advocacy for the Archdiocese of Washington, D.C. “The issue is now going back to the public square,” he said, and the growing Latino community will be an important part of the debate.

While he describes his family as generally pro-life, Mr. Rivas said has noticed tensions between relatives on the issue.

Latino Catholics and the faith community

According to the recent P.R.R.I. study, only 16 percent of respondents said they looked to religious leaders for guidance on abortion. The study also reported that 71 percent of Americans believed it was more “socially acceptable” to support abortion. Taking into account what appears to be the church’s waning influence on the topic, how should Catholic Latinos engage in the conversation about abortion in the United States?

Latino and pro-life leaders had a number of suggestions, including finding issues pro-life and abortion rights supporters can agree on and pushing for church action and legislative solutions that address problems like poverty, the high cost of child care and employer policies that make it harder for working women to have children.

“It’s contrary to human dignity for a woman to have to choose between an education and the life of her child,” Ms. Dumalet said. “It’s also contrary to human dignity that a woman would lose her job because she became pregnant. We don’t want children to grow up in poverty with parents that didn’t want to raise them and who have no other options. We can come to a meeting of the minds with these concerns. So let’s work toward other solutions.”

“It’s contrary to human dignity for a woman to have to choose between an education and the life of her child.”

Solutions may come from state governments offering companies incentives to enact family-friendly policies, she said. And the church can do more to help families as well. In some ways, it has already started.

Ms. Dumalet noted Walking With Mothers in Need, a U.S. Conference of Catholic Bishops program that seeks to accompany mothers throughout the lives of their children. In Houston, the program helps mothers with children from 1 to 18 years of age.

The 12 dioceses in California have teamed up to launch We Were Born Ready, an initiative overseen by the California Catholic Conference that seeks to mobilize the faith community in the state to serve women, children and families. That effort includes supporting proposals being considered by California legislators to expand paid leave, give vouchers for homeless pregnant women and provide better family support for incarcerated mothers.

Such programs provide a stark contrast with abortion rights advocates who, Ms. Dumalet believes, offer abortion as the only solution. She noted the pledges to help fly women in states with abortion restrictions to other states to have the procedure. “My thought is, ‘O.K., are you also willing to pay for paid parental leave for that employee should she decide that she wants to parent that child? Would you be willing to pay for health care for her dependent?’” she said.

Ms. Vides agreed. Legislators are considering 22 bills to expand access to abortion in California, but she said, “Mothers are not looking for abortion expansion, but for help with basic necessities that they need to survive and thrive here,” adding that simple measures like rental assistance would lead to fewer abortions.

Abortion rights proponents “link abortion to poverty and say it’s the poor women of color who need abortions,” Ms. Vides said. “[But] wait a minute. Our country has had abortion for the last 50 years, and that has not solved poverty. After an abortion, women return to the same space of oppression that they’ve been living in. They’re still in poverty. They’re still homeless. They’re still with an abusive partner.”