‘They are traumatized’: How Catholic Charities is responding to Uvalde after the shooting 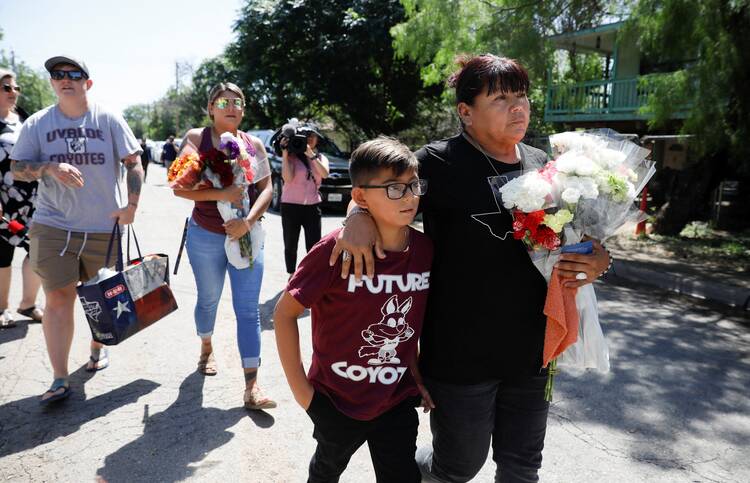 Dora Flores and her grandson arrive at Robb Elementary School in Uvalde, Texas, May 25, 2022, with flowers the day after a mass shooting. (CNS photo/Marco Bello, Reuters)

How do you help a small community respond to the incomprehensible—the murder of 19 children and two of their teachers, all of them family, friends and neighbors? A community wounded even deeper just two days later by the loss of the husband of one of those teachers, who died, his family said, because of grief?

The first thing you do is get there. J. Antonio Fernandez, president and C.E.O. of Catholic Charities of San Antonio, covered the one-and-a-half-hour distance to Uvalde, Texas, as soon as he heard about a school shooting there that stopped the nation in shock on May 24.

Catholic Charities has established a command post of sorts at Sacred Heart Church in Uvalde, according to Mr. Fernandez, putting together a crisis response team of three therapists, an attorney and a case manager. They have been assisting the families of victims with the practical demands of the horror that has befallen them—who, after all, plans for the funeral of a child?—while offering emotional and spiritual support to anyone able to receive it.

Catholic Charities is assisting the families of victims with the practical demands of the horror that has befallen them—who, after all, plans for the funeral of a child?

Mr. Fernandez reports that some families are too bereft and numb to come to the church for help. “They are traumatized” and hoping to avoid the national media, he explained. His counselors have been dispatched to visit them in their homes.

“For people to come out of this horrible tragedy, they’re going to have to be taken care of physically, mentally and spiritually,” Mr. Fernandez said.

Sacred Heart is located near the center of Uvalde, not far from the local middle and high schools and just a mile and half from the Robb Elementary School, where the community’s agony began. The church has already held two Masses for the community, one celebrated by Archbishop Gustavo García-Siller, and another is planned for tonight. Priests from all over the Diocese of San Antonio have come to Uvalde, Mr. Fernandez said, to help out however they can. Funeral Masses for the victims are being scheduled at Sacred Heart and other churches in Uvalde.

The logistics of grief is one area where Catholic Charities has found a role to play, Mr. Fernandez said. “We are supporting families to pay for the expenses of the funerals, as well as for family members who may come from other parts of the country and may need to fly to Uvalde.”

Many of the victims’ family members may be arriving from Mexico. Uvalde is largely a Latino community with strong generational and immediate family ties across the border. He said his office was ready to assist with visas, but he hoped under the circumstances that those issues would not prove an obstacle to reuniting Uvalde families during their mourning.

“For people to come out of this horrible tragedy, they’re going to have to be taken care of physically, mentally and spiritually.”

His counselors have been speaking with some of the many seniors who live around the school, Mr. Fernandez said. They were traumatized by the shooting itself and remain frightened by the military-style police presence in the community.

Catholic Charities has also been providing material assistance as requests come in, and the agency is ready to do more. “I think the community has many different needs, and I think little by little we’re going to see them surfacing,” he said. But for the victims’ families, Mr. Fernandez can only implore prayers for now, prayers while helpers who are coming to town wait to hear what the families tell them they need.

“We are helping several people right now, but this is gonna be a long-term issue. This is not going to go away,” Mr. Fernandez said. “We just have to wait for them to be prepared to talk to a therapist or to a priest and to do whatever it takes. It has to be very hard for them.”

Across the community, he has seen people in prayer around 22 crosses set up in a community plaza; people already wearing “Uvalde Strong” T-shirts; people coming together for the most part in grief at their losses and not so much to join the demands for new laws to respond to gun violence apparent in other communities or on social media.

That anger may come later, but for now Uvalde is simply a town stunned in deep sorrow. “I truly believe that this community is now trying to be together as one,” Mr. Fernandez said, “They are taking care of each other.

“I don’t see anyone upset. I just see people in mourning, and I think it’s going to take a while for people to grieve through all of this.”