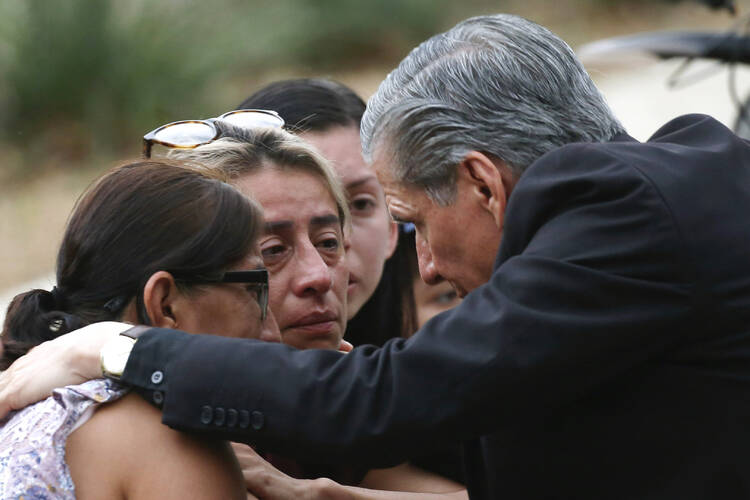 Archbishop Gustavo García-Siller of San Antonio comforts people in Uvalde, Texas, outside the SSGT Willie de Leon Civic Center, where students had been transported from Robb Elementary School after a shooting May 24, 2022. (CNS photo/Marco Bello, Reuters)

Catholic leaders are reacting with anger and calls to restrict guns following the latest mass shooting that left at least 19 children and two teachers dead.

“It’s time to say, ‘Enough!’ to the indiscriminate trafficking of guns,” Pope Francis said Wednesday after offering prayers to the victims of the Uvalde, Tex., shooting. “Let’s all work to ensure that such tragedies never happen again.”

Several bishops in Texas released statements, calling for prayers and, in one instance, expressing frustration at attempts to deflect attention away from guns.

“Don’t tell me that guns aren’t the problem, people are,” Bishop Daniel Flores of Brownsville, Tex., tweeted. “I’m sick of hearing it.”

“Don’t tell me that guns aren’t the problem, people are,” Bishop Daniel Flores of Brownsville, Tex., tweeted. “I’m sick of hearing it.”

“The darkness first takes our children who then kill our children, using the guns that are easier to obtain than aspirin,” Bishop Flores continued. “We sacralize death’s instruments and then are surprised that death uses them.”

The Texas Catholic Conference of Bishops, which represents the state’s 21 bishops, said in a statement, “Each one of us has a responsibility to address the root causes of this kind of evil.”

“Human beings are not created for death,” the statement said. “The killing of defenseless children and their teachers is evil and an offense against God and human beings.”

Archbishop Gustavo Garcia-Siller, M.Sp.S., who heads the Archdiocese of San Antonio, which includes Uvalde, said in a statement, “there are no words to adequately convey the deep sadness and sorrow and overwhelming shock at the incomprehensible loss of life.”

“The word tragedy doesn’t begin to describe what occurred,” the archbishop continued. “These massacres cannot be considered ‘the new normal.’”

“The Catholic Church consistently calls for the protection of all life; and these mass shootings are a most pressing life issue on which all in society must act—elected leaders and citizens alike.”

Archbishop Garcia-Siller said mass shootings must be seen through the prism of the church’s pro-life concerns.

“The Catholic Church consistently calls for the protection of all life; and these mass shootings are a most pressing life issue on which all in society must act—elected leaders and citizens alike,” he said.

Tuesday’s shooting was carried out by a local gunman who appears to have legally purchased two assault weapons days after his 18th birthday. It is the second deadliest school shooting in U.S. history, following the 2012 shooting in Newtown, Conn., that left 26 dead and just ahead of the 2018 shooting in Parkland, Fla., where 17 people were killed.

On Tuesday evening, President Biden addressed the nation, asking, “Why are we willing to live with this carnage?”

Noting that these kinds of mass shootings rarely happen in other countries, Mr. Biden said political leaders must take action.

On Tuesday evening, President Biden addressed the nation, asking, “Why are we willing to live with this carnage?”

On Wednesday morning, Archbishop Garcia-Siller tweeted, “Thank you President Biden for your heart felt prayers for our little ones and teachers. Love is needed. Thank you.”

For its part, the U.S. Conference of Catholic Bishops released a brief statement on Tuesday evening echoing Archbishop Garcia-Siller’s words.

“There have been too many school shootings, too much killing of the innocent. Our Catholic faith calls us to pray for those who have died and to bind the wounds of others, and we join our prayers along with the community in Uvalde and Archbishop Gustavo García-Siller,” the statement read. “As we do so, each of us also needs to search our souls for ways that we can do more to understand this epidemic of evil and violence and implore our elected officials to help us take action.”

Though the statement on the Texas shooting did not allude to previous statements, the U.S.C.C.B. supports several gun control measures, including a ban on assault weapons, universal background checks and restrictions on the purchasing of handguns.

Cardinal Blase Cupich of Chicago, a longtime proponent of stiffer gun control measures, released a lengthy statement via Twitter that said “America is awash in guns.”

“Mass shootings have become a daily reality in America today,” the cardinal said. “The size of the crisis, and its sheer horror, make it all too easy to toss up one’s hands and declare: Nothing can be done. But that is the counsel of despair, and we are a people of hope.”

The cardinal acknowledged the importance of prayer for people impacted by gun violence but also said Americans “must steel ourselves to act in the face of what seems like insurmountable despair.”

“We know that gun safety measures make a difference,” he said.

“Our thoughts and prayers are with the victims and their families,” said Mary Haddad, R.S.M., the president and chief executive of the Catholic Health Association. “But action is needed now.”

Citing a recent uptick in gun deaths in the United States, Sister Haddad said it was “imperative” that society “better understand the root causes of firearm violence so that government and health care organizations can work together to reverse this devastating trend.”

“Thoughts and prayers alone are no longer acceptable for people of faith and goodwill,” she said. “We must act to bring an end to such senseless violence.”