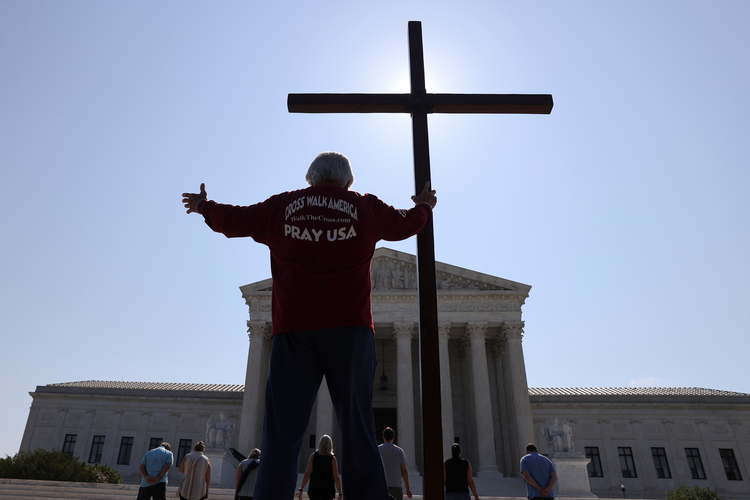 Starting in mid-June—and, for the first time in more than 20 years, continuing into the first two weeks of July—all eyes were on the U.S. Supreme Court. Over four weeks at the beginning of summer, these are just some of the most significant decisions handed down: a historic expansion of nondiscrimination protections to include sexual orientation and transgender persons; a continuation of the status quo on abortion that calls into question more than 40 years of pro-life political strategy; a school funding decision that may finally put the nail in the coffin for anti-Catholic Blaine Amendments; a temporary lifeline for immigrants who faced deportation to countries they are too young to remember leaving; two affirmations of the religious freedom of employers that many decried as unfair to their employees; and rulings that the president is not immune to criminal investigations but may be able to continue stonewalling legislative subpoenas.

In thinking about the Supreme Court, as with almost everything else, it is worthwhile to begin with gratitude and to look for what can be praised. The court’s refusal to let the administration proceed with the deportation of Dreamers avoided a tragic outcome that an overwhelming majority of Americans do not want, while the anti-discrimination decision extended to L.G.B.T. Americans basic civil rights protections that most of the country supports. In both these cases, the Supreme Court reached results that had been proposed multiple times in legislation and in some cases would have commanded a majority of congressional support had they been allowed to proceed to a vote.

The Supreme Court reached results that had been proposed multiple times in legislation and in some cases would have commanded a majority of congressional support.

The court’s decision that religious schools must be equally eligible for funding made available for use at secular private schools reinforces an American tradition of encouraging the exercise of religion rather than merely tolerating religious belief, while striking a blow against anti-religious and specifically anti-Catholic bias hiding under the rhetoric of a “wall of separation” between church and state. The judgments protecting the ministerial exception to employment discrimination laws and upholding a religious exemption from the contraceptive coverage mandate both commanded 7-to-2 majorities. The justices’ votes indicate that the legal status of religious liberty is less contentious than the underlying moral questions, especially regarding employment discrimination. While the court preserved religious organizations’ legal freedom to define who counts as a “minister,” unjust use of that categorization to fire L.G.B.T. employees or employees who are elderly or sick will only increase hostility to religious liberty claims in the future.

Other 7-to-2 decisions, in cases in which President Trump challenged subpoenas for financial records, similarly demonstrated that the court was able to reach significant agreement on legal reasoning even when political stakes are high.

Most of the public commentary on these decisions and even much of the news reporting, however, reveals a far greater investment in preferred outcomes than in clear legal reasoning. On the one hand, this is perfectly understandable: These decisions have vital consequences, and real and irreversible harms are at stake. Yet the pressures that lead to using the court to achieve legislative goals—or to manage the fallout from arbitrary and capricious exercises of executive power—continue to build up.

Repeatedly referring these moral dilemmas to the court, often framed very poorly as legal disputes, is a slow-motion disaster for democracy.

What many of these cases have in common is that the American people are and should be more interested in their moral consequences than in their specific legal ramifications. Repeatedly referring these moral dilemmas to the court, often framed very poorly as legal disputes, is a slow-motion disaster for democracy. The court is functioning in these instances less as a judicial body than as a relief valve for legislative dysfunction and executive overreach, and the pressure is rising faster than it can be vented through the necessarily slow process of judicial opinions.

We bring our most vehement moral disagreements to the court, which almost never resolves them to anyone’s full satisfaction. And even when real agreement does exist, we fail to legislate according to it, continuing the vicious cycle that brings us back, June after June after June, to wait for nine people, who all attended either Harvard or Yale, to try to achieve compromises that our legislators, elected officials and the voters themselves cannot reach.

The issue of abortion at the Supreme Court is a microcosm of this sorry situation. Roe v. Wade short-circuited the process of legislative compromise over abortion. In response, since amending the U.S. Constitution to reverse the court’s consitutionalization of the abortion issue proved impossible, the pro-life movement turned its attention to judicial appointments in order to return abortion to the legislative arena. Thus, the issue has dominated national presidential politics for decades, fueling fundraising and empowering single-issue lobbying groups while deepening partisan divisions.

Having the abortion issue locked up at the Supreme Court has also distorted Catholic rhetoric on the morality of voting decisions to the point where many Catholics are incorrectly convinced that no vote for a candidate who supports legal abortion can ever be justified, while any vote for a candidate who will appoint justices who may overturn Roe, no matter what other issues are in play, is obligatory. Such tunnel-visioned moral analysis played a significant and perhaps decisive role in the 2016 presidential election. And this year, Chief Justice John Roberts’s deciding vote to uphold a 2015 abortion decision, which he justified in terms of stare decisis (ruling on precedent), reveals that five justices presumably ready to reject Roe is not enough. The hope against hope that the next Supreme Court vacancy will finally be the one that solves this problem only indicates how intractable the situation is.

Legislative compromise will not prevent moral disagreements from landing in front of the Supreme Court. But it is the more conclusive and democratic resolution for issues where sincerely held values are in real tension with each other. To that end, we need not only to elect a president and senators who will give us the right justices but even more to elect officials who are committed to dealing with moral arguments to win legislation and not simply to win elections.

This article also appeared in print, under the headline “The Supreme Court cannot solve all our moral disputes.,” in the August 2020, issue.