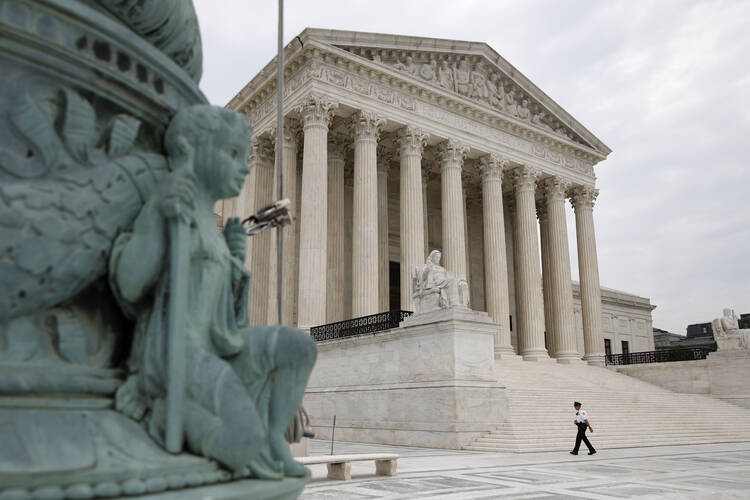 The U.S. Supreme Court ruled today that religious institutions enjoy a broad, constitutionally guaranteed freedom to hire and fire employees according to the mission and identity of the institution. The question raised by Our Lady of Guadalupe School v. Morrissey-Berru was whether lower courts can hear employment discrimination claims brought by employees of religious institutions. The Supreme Court held previously that courts could hear such cases if the cases involved employees who were not, strictly speaking, “ministers.” Today, the court ruled that the definition of a “minister” is broader than the criteria it had previously established, stating that “what matters, at bottom, is what an employee does.”

Writing for the seven-justice majority, Justice Samuel A. Alito Jr. observed that “even though the employees [in the present cases] were not given the title of ‘minister’ and have less religious training,” the so-called ministerial exception still applies. “The religious education and formation of students is the very reason for the existence of most private religious schools, and therefore the selection and supervision of the teachers upon whom the schools rely to do this work lie at the core of their mission,” Mr. Alito wrote.

According to the court’s ruling, the First Amendment guarantee of freedom of religion necessarily gives religious institutions far greater freedom to hire and fire employees without fear that they may face litigation under state and federal anti-discrimination laws. In the wake of the court’s decision, Catholics have raised concerns about the impact of the decision on non-Catholic employees, as well as the consequences for Catholic and non-Catholic L.G.B.T. employees who marry in contravention of the church’s moral teaching. Some have even expressed concerns that the decision opens the door for a purge of L.G.B.T. employees specifically. According to today’s decision, religious institutions are exempt from the court’s June 17 ruling that workplace discrimination based on sexual orientation or gender identity is prohibited by the Civil Rights Act of 1964.

Catholic teaching has long recognized that what is immoral should not necessarily be illegal and vice versa.

The editors of America have weighed in on these cases in previous editorials, which offer some helpful perspective. First, the editors have traditionally relied on the essential distinction between what is legal and what is moral. Catholic teaching has long recognized that what is immoral should not necessarily be illegal and vice versa. In other words, it is possible to hold two opinions without contradiction—namely, that the U.S. Constitution guarantees religious institutions the freedom to hire and fire whomever they like and that this constitutional guarantee does not exempt religious institutions from the moral law, the virtue of prudence or the demands of justice.

America’s editorial in the wake of the June 17 court decision relied on this principle in its reasoning:

The editors of America have long supported [a ministerial] exception, which is in line with the constitutional guarantees made to religion. Should the court decide to carve out such an exception, however, it does not necessarily follow that religious institutions should avail themselves of it.

Very few [of the lay employees of Catholic institutions] subscribe to the totality of Catholic teaching. How can the church continue to sustain its ministries while bearing witness to the timeless truths of its teaching when its own employees do not accept them all? The answer is not to downplay or gloss over these teachings. Catholics are called to preach difficult truths about a range of subjects, including but not limited to marriage and sexuality. But what is the best way to do that? It is true that sometimes an employee of a Catholic institution can cause scandal by his or her public words or deeds. But it is also true that treating employees unfairly, by holding them to different standards or dismissing them abruptly or without consultation, can itself cause scandal. The high public profile of these firings [of L.G.B.T. employees who choose to marry], when combined with a lack of due process and the absence of any comparable policing of marital status for heterosexual employees, constitute signs of “unjust discrimination.”

The U.S. Supreme Court today ruled that religious institutions have a constitutional right to hire and fire for mission. This decision is correct. Church institutions, however, should not exercise that freedom in pursuit of an indiscriminate purging of church employees simply because they hold unorthodox views or have made life choices that do not accord with Catholic teaching. That would be wrong and would be a source of grave scandal for the faithful and for the country we seek to evangelize.