Editorial: L.G.B.T. discrimination protections are not a catastrophe for Catholicism. 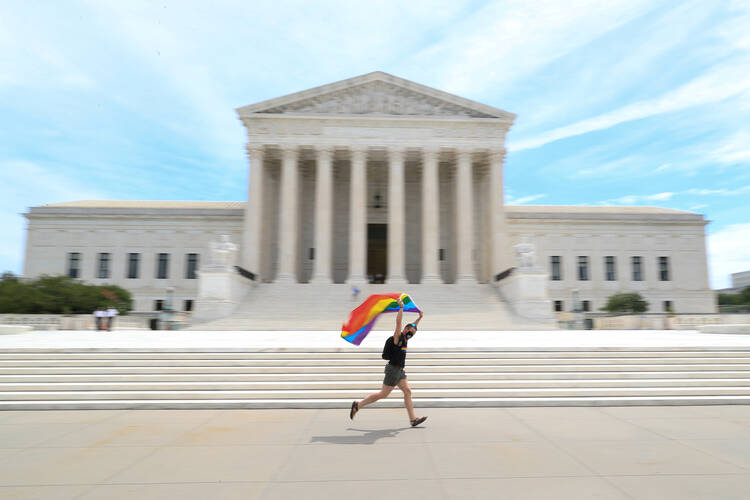 A person runs with a gay pride flag in front of the U.S. Supreme Court building in Washington June 15, 2020. In a 6-3 vote that same day, the Supreme Court said LGBT people are protected from job discrimination by Title VII of the Civil Rights Act of 1964. (CNS photo/Tom Brenner, Reuters)

In a major advance for the civil rights of L.G.B.T. people, the Supreme Court of the United States decided this week that workplace discrimination based on an individual’s sexual orientation or gender identity is prohibited by Title VII of the Civil Rights Act of 1964. As Catholics consider how to respond, they should distinguish carefully between reacting to this judicial ruling and the larger question of how to evangelize the culture, not only regarding sexual morality but also human dignity and justice in all aspects of life.

The court’s decision comes more than 40 years after nondiscrimination legislation for L.G.B.T. people was first filed in the U.S. Congress. We would have preferred for this matter to be addressed through the legislative process. As America’s editors wrote after the court’s Obergefell ruling in 2015: “There is a serious constitutional principle at stake: We must consider whether we want major public policy questions like the definition of civil marriage settled by judicial fiat, rather than by our elected representatives or by direct vote of the people.”

No U.S. citizen should be fired simply because that person belongs to the L.G.B.T. community.

Yet prescinding from the question of the proper relationships among the branches of the federal government, the ruling’s practical effect, which bans workplace discrimination against L.G.B.T. people, is a good one. No U.S. citizen should be fired simply because that person belongs to the L.G.B.T. community. This is consistent with the clear teaching in the Catechism of the Catholic Church that “every sign of unjust discrimination [against homosexual persons] should be avoided” (No. 2358).

In the majority opinion, Justice Neil Gorsuch was careful to point out that this decision does not address conscience protections for religious institutions or the so-called ministerial exception, which the court is expected to treat in future cases. The editors of America have long supported such an exception, which is in line with the constitutional guarantees made to religion.

Should the court decide to carve out such an exception, however, it does not necessarily follow that religious institutions should avail themselves of it. As we noted in 2016, “the high public profile of these firings [of L.G.B.T. employees who choose to marry], when combined with a lack of due process and the absence of any comparable policing of marital status for heterosexual employees, also constitute signs of ‘unjust discrimination.’”

What does a church open to L.G.B.T. Catholics look like?
James Martin, S.J.

As with the Obergefell decision, this ruling also affords the church an opportunity to reimagine its public witness. The vocation of Catholics is to exercise moral suasion to influence the opinion of the citizens of the United States. There is little chance of success if we go about this work with the “culture warrior” attitude of so many politicians and public figures over the past decades.

This mindset reaches its extreme when the courts are treated as a third house of the legislature rather than as a separate branch of government entrusted with its own distinct tasks. What the law is and what the law should be are different questions. Confusing the two, as too many warriors and commentators do, has only further paralyzed the legislative process by allowing our eager legislators to pass the buck to the courts.