The Editors: Congress has a duty to protect immigrants 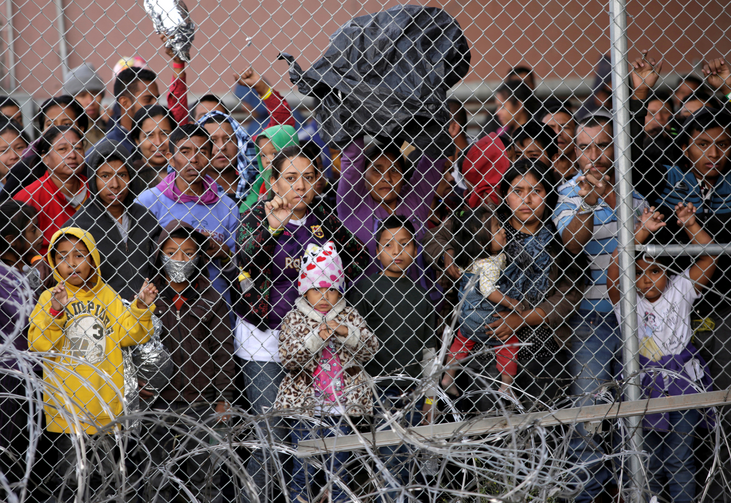 Central American migrants are seen inside an enclosure in El Paso, Texas, March 27, 2019. Over the last year, Catholic dioceses on the U.S. side of the border with Mexico, in places such as El Paso and Brownsville, Texas, scrambled to accommodate the growing number of children, men and women crossing the border, seeking asylum and entering the U.S. (CNS photo/Jose Luis Gonzalez, Reuters)

The U.S. Conference of Catholic Bishops has maintained its position against the rule change, most recently stating that the decision “will have devastating consequences for immigrant communities, as those impacted are cast into the shadows because they fear deportation and family separation for seeking critical support.”

Congress cannot continue to sit idly by while the executive branch continues to demolish our already broken immigration system. This body has been negligent for far too long in its duty to pass a fair and humane immigration reform.

Congress cannot continue to sit idly by while the executive branch continues to demolish our already broken immigration system.

Since 1990, the little Congress has done has restricted immigration, strengthened border security and cracked down on employers who hire undocumented immigrants. Those measures include the 1996 Illegal Immigration Reform and Immigrant Responsibility Act, the 2001 Patriot Act, the 2005 Real ID Act and the 2006 Secure Fence Act.

Throughout that time, the Catholic Church in the United States and immigrant rights advocates have lobbied Congress for comprehensive reform. Those efforts included “Strangers No Longer,” a 2003 pastoral letter from the bishops of Mexico and the United States, which articulated a nuanced path forward on immigration reform. The bishops’ vision recognized the nation’s right to sovereignty while upholding the human dignity of migrants. But while efforts like the Justice for Immigrants campaign continue, a divided Congress has yet to enact comprehensive reform.

This partisan congressional paralysis has left immigration measures in the hands of the executive branch. In 2012, President Obama issued an executive order to establish the Deferred Action for Childhood Arrivals program, known as DACA, which protected from deportation undocumented immigrants who came to the United States as children.

The Trump administration announced plans to end DACA in 2018, but court rulings have temporarily blocked the termination of the program. Last November, the Supreme Court heard oral arguments on DACA and is expected to rule on the measure in June. The recent ruling on public charge could be a harbinger of that decision.

But Congress does not have to wait for the Supreme Court or the president to act. Last June, the House passed the American Dream and Promise Act of 2019, which would create a pathway to citizenship for Dreamers and recipients of Temporary Protected Status. It is time for majority leader Mitch McConnell to allow a vote on the American Dream Act in the Senate and for President Trump to sign it into law. Polls have indicated that more than 75 percent of Americans support legislation that allows Dreamers to stay in the country. Mr. Trump has said he has “great heart” for Dreamers.

Congress does not have to wait for the Supreme Court or the president to act.

Beyond addressing this imminent threat to Dreamers, members of Congress must stop using immigrants to score political points with their base and finally fix the policies that treat foreign arrivals as problems and keep millions in legal uncertainty. The nation is ill served by a Congress that neither addresses the estimated 12 million undocumented immigrants who have made the United States their home nor provides a realistic process for managing the flow of immigrants across the southern border. The greatness of America has always been built on the strength of its immigrants. It is time for Congress to ensure this greatness continues.