How James G. Blaine became the face of anti-Catholicism in education 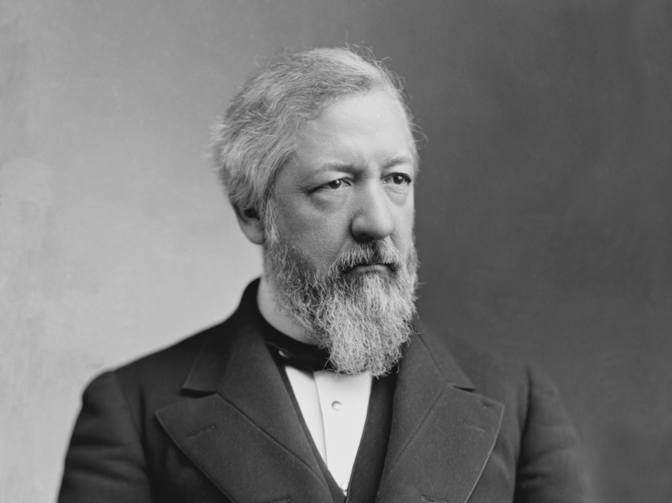 There are few epithets as personally devastating as “He was almost president of the United States.” In 1884, as the Republican nominee for the presidency, James G. Blaine had already served as the speaker of the House of Representatives and as secretary of state, and he was an unmatched personality in the Grand Old Party. Blaine campaigned hard in a brutal election year, with charges of corruption and immorality leveled against him and his opponent, Grover Cleveland, alike.

One of Blaine’s greatest challenges was securing the burgeoning Catholic vote. A Presbyterian by rearing, Blaine had proposed, as a political stunt to distract from President Grant’s flailing administration, a constitutional amendment in 1875 that would have restricted all federal funds from going to religiously affiliated schools. The amendment passed in the House but failed by four votes in the Senate. The failed amendment dogged Blaine, allowing his opponents in the Democratic Party to hurl claims of anti-Catholicism at him.

But it was not until the very end of the 1884 campaign that the Democrats secured the ammunition it needed to kill Blaine’s chances for the presidency. When Blaine visited a group of Protestant ministers in New York, the welcoming speaker, the Rev. Dr. Samuel Burchard, provided the buzzwords that would turn the vote. As Charles Willis Thomas wrote for America in 1932 about Rev. Burchard’s remarks: “One of those droning sentences was this: ‘We are Republicans, and don’t propose to leave our party and identify ourselves with the party whose antecedents have been Rum, Romanism, and Rebellion.’... It passed unheeded—unheeded by all save one. The Democratic National Committee had a sleuth following Blaine around, to pick up any unconsidered trifle that might make good campaign ammunition.” With this, the Tammany political machine in New York went to work against Blaine.

The failed amendment dogged Blaine, allowing his opponents in the Democratic Party to hurl claims of anti-Catholicism at him.

Blaine went on to lose the election, notably losing New York by one-tenth of one percentage point and, with it, the 36 electoral votes that would have given him the presidency. Blaine may have lost this battle, but Blaine amendments showed that anti-Catholicism was still a potent force in the country. Since that time, 38 states have adopted amendments restricting funding to religiously affiliated schools, the eponymous, so-called baby Blaine amendments—and Blaine has been held up as a key example of late-19th-century anti-Catholicism in the United States.

Over the last 145 years, as access to education has expanded, the concepts of religious liberty have broadened and retracted, and societal mores have shifted, the applications of Blaine amendments at the state level have been repeatedly challenged.

Most recently, on Jan. 22, the U.S. Supreme Court heard arguments for Espinoza v. Montana Department of Revenue. Montana is one of the 38 states that have a constitutional amendment strictly prohibiting the use of public funds for religiously affiliated schools. In 2015, the Montana Legislature passed a bill that provides tax credits to those who donate to nonprofit organizations that, in turn, grant scholarships that families can use at private schools, including religious ones. On Dec. 12, 2018, the Montana Supreme Court reversed the ruling of a district court and held that the tax credit program violated the Montana State Constitution.

Espinoza v. Montana is another in a long line of court cases and policy debates concerning the use of public dollars to support private, religiously based education.

Espinoza v. Montana is another in a long line of court cases and policy debates concerning the use of public dollars to support private, religiously based education. In delving into the archives of America,one finds that these arguments have ebbed and flowed in prominence over the last century and a half.

The term “Blaine amendment” does not appear in the pages of America until the late winter of 1961. In the early days John F. Kennedy’s administration, Charles M. Whelan, S.J., in “Only Higher Education, Mr. President?”argued against Mr. Kennedy’s position that “In accordance with the clear prohibition of the Constitution, no elementary or secondary school funds are allocated for constructing church schools or paying church school teachers’ salaries; and thus non-public school children are rightfully not counted in determining the funds each state will receive for its public schools.”

A Mandate for Anti-Catholicism: The Blaine Amendment
Thomas E. Buckley

Father Whelan writes that President Kennedy has an overly simplistic view of federal school aid, which has a long and complicated legacy that does not allow for such a cut-and-dried opinion. He argues that there are “significant facts in our constitutional history which militate for the legitimacy of Federal aid to education, regardless of the religious consequences. First, the Blaine Amendment was not adopted. In spirit and in letter, it would have forbidden every form of Federal aid to education which would result in direct or indirect benefit to church schools.”

Father Whelan continues: “This amendment repeatedly failed of enough votes in Congress to be proposed to the States for ratification. The failure of its adoption by the nation is the precise reason why it was adopted in New York and many other States.”

A major flashpoint regarding Blaine amendments followed just a few years after the term first appeared in the pages of America. In 1966, New York was preparing for a state constitutional convention to rewrite and update the Constitution adopted in 1938. The editors opined:

New York’s constitutional convention could well serve both the State and the nation by adopting a new clause in tune with the social realities of the mid-20th century, in which one of our overriding needs is to see that all children are properly educated. We would suggest that the best way to accomplish this constitutional aggiornamento would be to drop the “Blaine Amendment” and to put in its place a clause modeled on the Federal First Amendment.

The following year, the proposed new Constitution was solidly rejected by every county in New York—many attributing this failure to the inclusion of the repeal of the Blaine Amendment. (As a result, the state of New York is still operating on the Constitution adopted in 1938.)

Absent a sweeping decision by the Supreme Court, there is little evidence that the political will exists to reverse Blaine’s troubling legacy.

Between 1967 and 1971, America published several substantial pieces on the challenges posed by Blaine amendments. In 1967, for example, the editors lauded the New York State Court of Appeals’ decision to uphold as constitutional a law that provided free textbooks to all schoolchildren, with the court citing the difference between the benefits awarded to an individual and those awarded to an institution. The editors would cite this nuance in arguments moving forward.

But not all coverage suggests similar successes. In 1968, America reported on the growing concerns about the secularization of Catholic colleges in search of federal and state aid. In 1970, America reported that in response to the recently passed Bundy Law, which offered institutional grants to private, four-year institutions of higher education, New York State Education Commissioner Ewald B. Nyquist “ruled that 21 colleges with religious affiliations [mostly Roman Catholic] were constitutionally ineligible for assistance under the Bundy Law.” The editors were, predictably, unamused, lamenting that the decision “is sheer nonsense for higher education in New York.” The title of the editorial said it all: “Blaine, Bundy & Balderdash.”

James G. Blaine, now branded as one of the leaders of anti-Catholicism in the 19th century, was the son of an Irish Catholic mother.

This was not the last word America had on Blaine amendments, but the pattern became familiar. The usual suspects have appeared intermittently over the last 50 years: issues pertaining to school vouchers, tax credits, school supplies and institutional grants have been litigated over and over again. While it would appear that the Blaine amendments are around to stay for the foreseeable future, the U.S. Supreme Court continues to take a more and more expansive view of religious liberty and accommodations for it in our increasingly secular society.

The foundations of the Blaine amendments tell us a lot about their future. James G. Blaine, now branded as one of the leaders of anti-Catholicism in the 19th century, was the son of an Irish Catholic mother. He repudiated Dr. Burchard’s claims that a vote for the Democratic Party would bring about “Rum, Romanism and Rebellion,” noting that he could never condemn “that ancient faith in which my mother lived and died by.” His own extended family contained the famed Mother Angela, the superior of the Sisters of the Holy Cross and who served as a nurse during the Civil War, and Thomas Sherman, S.J., the son of General William Tecumseh Sherman, who wandered in and out of America’s Jesuit community in 1914.

In the end, his motives in putting forward the Blaine Amendment were ambition and political gain. Today, absent a sweeping decision by the Supreme Court, there is little evidence that the political will exists to reverse Blaine’s troubling legacy.

@NicholasSawick1
Show Comments ()
Join the conversation: Login or create an account
Before you can comment, you need to update your profile to include your first and last name, as required in our comments policy. Then reload this page and you'll be set up for commenting. Update your profile
Show Comments ()
Comments are automatically closed two weeks after an article's initial publication. See our comments policy for more.