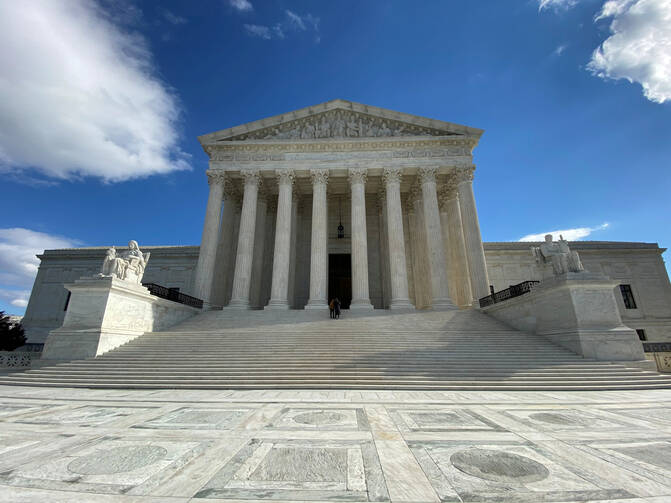 The Supreme Court is siding with two Catholic schools in a ruling that underscores that certain employees of religious schools, hospitals and social service centers can't sue for employment discrimination.

The high court's ruling on Wednesday was 7-2.

The justices had previously said in a unanimous 2012 decision that the Constitution prevents ministers from suing their churches for employment discrimination. The justices said then that the Constitution’s required separation between church and state means that religious groups must be allowed to hire and fire individuals who serve as teachers or messengers of their faith, without court interference. But the court didn’t rigidly define who counts as a minister.

Two U.S. bishops said they welcomed the Court's ruling, noting that the decision "rightly acknowledged" the limit on state authority.

Two U.S. bishops said they welcomed the Court's ruling, noting that the decision "rightly acknowledged" the limit on state authority.

The decision, written by Justice Samuel Alito, said: "What matters, at bottom, is what an employee does."

He said that even though the elementary school teachers "were not given the title of 'minister' and have less religious training" that the teacher in the previous court case involving the ministerial exception, the court holds that the same rule applies.

"The religious education and formation of students is the very reason for the existence of most private religious schools, and therefore the selection and supervision of the teachers upon whom the schools rely to do this work lie at the core of their mission," Alito wrote.

"Education is a central aspect of the church's mission," the bishops said. "As "institutions carrying out a ministry of the church, Catholic schools have a right, recognized by the Constitution, to select people who will perform ministry. The government has no authority to second-guess those ministerial decisions."

Adrian Alarcon, spokesperson for the Archdiocese of Los Angeles Catholic Schools, similarly pointed out that "religious schools play an integral role in passing the faith to the next generation of believers" and that the archdiocesan Catholic schools are "grateful that the Supreme Court recognized faith groups must be free to make their own decisions about who should be entrusted with these essential duties."

In her dissent, Sotomayor said the court's ruling is "not only wrong on the facts, but its error also risks upending anti-discrimination protections for many employees of religious entities."

She noted that the court has "recently lamented a perceived 'discrimination against religion.'" Yet in this case, she said, the court "swings the pendulum in the extreme opposite direction, permitting religious entities to discriminate widely and with impunity for reasons wholly divorced from religious beliefs," something she said will be "impossible to ignore for long, particularly in a pluralistic society."

In her dissent, Justuce Sotomayor said the court's ruling "risks upending anti-discrimination protections for many employees of religious entities."

This case examined if courts can hear employment discrimination claims brought by teachers at Catholic elementary schools. It involved California Catholic school teachers who claimed they had been victims of job discrimination and the schools who fired them who said they were exempt from anti-discrimination laws due to ministerial exception spelled out in a previous Supreme Court case about a fired teacher at a Lutheran school.

The cases before the court were a combination of two cases, St. James School v. Biel and Our Lady of Guadalupe School v. Morrissey-Berrum, both schools in the Los Angeles Archdiocese.

At St. James School in Torrance, former fifth grade teacher, Kristen Biel, said she was fired after informing school administrators that she had breast cancer and would have to take time off for surgery and chemotherapy. She sued under the Americans with Disabilities Act of 1990. Biel died last summer, but her husband is seeking damages. Becket, the nonprofit religious liberty law firm representing the schools, said that in 2015, the school chose not to renew Biel's one-year contract based on classroom performance.

Our Lady of Guadalupe School in Hermosa Beach did not renew the contract in 2013 for Agnes Morrissey-Berru, who had taught both fifth and sixth grades since 1999, saying she had a problem keeping order in her classroom and meeting expectations under a new reading program. Morrissey-Berru sued, alleging age bias under the Age Discrimination in Employment Act of 1967.

In both cases, federal district courts ruled in favor of the schools, citing ministerial exception. But two separate panels of the U.S. Court of Appeals for the 9th Circuit reversed these decisions, saying the limited extent of the employee's religious duties were insufficient to qualify for a ministerial exception that was more often applied to those with roles of religious leadership.

The 2012 decision these schools were standing on is Hosanna-Tabor Evangelical Lutheran Church and School v. Equal Employment Opportunity Commission, where a teacher at a Lutheran school in Michigan said she was fired for pursuing an employment discrimination claim based on a disability.

In that ruling, the court said the ministerial exception to anti-discrimination laws meant that religious organizations couldn't be sued for firing an employee classified as a minister.

Briefs filed by both schools point out that the "scope of the ministerial exception is a vital and recurring question of nationwide importance for thousands of religious organizations and individuals."

The National Catholic Educational Association, in a friend-of-the-court brief in support of St. James School, stressed instead that Biel, as the school's only fifth grade teacher, "bore particular responsibility for effectuating -- and embodying -- the integral formation that is distinct to Catholic schools."

Richard Garnett, law professor at the University of Notre Dame Law School and director of the university's Program on Church, State and Society, said at the time of the oral arguments that even though these teachers were not giving theology instruction and were not ordained clergy do "their role is, and is understood as, a ministerial one, and secular courts are not in a good position to second-guess or override religious institutions' decisions about their ministerial employees' role."

He also said the cases were not, "as some have complained, about a supposed right of churches to 'ignore' civil-rights laws. Quite the contrary. These cases are about protecting the civil and constitutional rights of religious institutions to decide religious questions for themselves."

[Read this next: The ministerial exception is good law—but no excuse for indiscriminate firing by Catholics]