Why the U.S. going to the moon still matters to immigrants 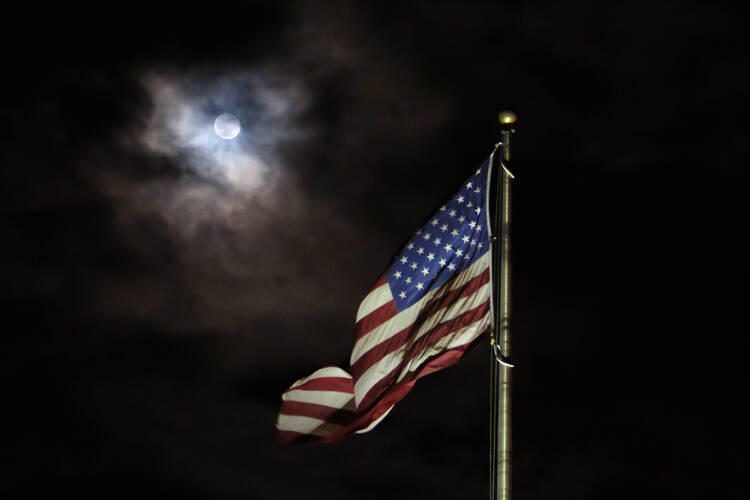 President John F. Kennedy may have been born on the East Coast, but his imagination was of the West and of the American frontier. He accepted the Democratic nomination in 1960 in Los Angeles, noting the city was “on what was once the last frontier” before declaring, “We stand today on the edge of a New Frontier.” He meant many things by this phrase, but now when we speak of President Kennedy’s frontier we think of space, the moon and the planets beyond.

The United States has always defined itself against a frontier, and often for the worse. See what happened to the Pequots who clashed with the Plymouth Bay Colony that President Kennedy romantically invoked when “choosing to go” to the moon.

Or consider the frontier in the news today: the U.S.-Mexico border, which marks the violent expansion of Anglo-Americans across an already populated continent. As vigilante militias of white men roam the desert hunting for largely indigenous-origin peoples, the border reminds us of the worst moments of racism during the history of the U.S. frontier. For Mexican-Americans like myself, the border and its walls are the physical manifestation of everything in the United States that tells Latinos we do not belong.

President Kennedy’s frontier was innocent. In space, there would be no Modoc, Lakota or Mexicans to displace.

But President Kennedy’s frontier was innocent. In space, there would be no Modoc, Lakota or Mexicans to displace. The conquest of the moon would display American courage without American atrocities. As Kennedy himself observed: “There is no strife, no prejudice, no national conflict in outer space as of yet. Its dangers are hostile to us all.”

To be sure, there have been flashes of resentment from the marginalized toward the space program. The black poet Gil Scott-Heron once said, “I can’t pay no doctor’s bills, but Whitey’s on the moon.” But spacefaring could be a uniting purpose. It is no accident that the era of the space race was also the era of the Civil Rights Act, with Kennedy’s death invigorating the push for both.

The moon landings were also a unifying force around the world. It was the rare U.S. victory that could be done in the name of “all mankind.” Add it all up and the ’60s seemed to say: Anybody can be an American, and Americans can go to the moon.

My Mexican father was certainly impressed, as he watched the grainy images of the moon landings on TV as a child in Mexico City. He still points to the moon landings as an example of what this country is capable of. For my part, I absorbed many lessons on how to be an American by observing how Americans related to space. I could identify with Neil Armstrong, Buzz Aldrin and Michael Collin, and cheer them on, in a way I never could with Davy Crockett for fighting off Mexicans at the Alamo. I can look up at the moon and feel it was ours, American, in a way that included me.

If playing cowboys and Indians carried with it the shadow of Wounded Knee, playing astronaut offered nothing but acceptance. By the time I grew up, there were women astronauts, black astronauts, Latina astronauts. There would even be a Mexican-American farmworker astronaut from the fields of California, the inspiring Jose Hernandez. This is what a final frontier is: the promise of a manifest destiny without displacing Indians or Mexicans. Space is how one reconciles the conflicting aspirations of the United States to be both a multiethnic society and a frontier.

But the definition of space as an inclusive frontier is under threat. It is not because of the discovery of another species that would complicate the innocence of our arrival on distant planets (at least not yet). Instead, the threat comes from our own species, for wherever humans go, we will take our imperfect fallen selves with us. And not even the void of space is big enough to fit all our hatreds.

Space is how one reconciles the conflicting aspirations of the United States to be both a multiethnic society and a frontier.

One threat is the militarization of space in the name of Trumpian nationalism, notably the saber-rattling idea of the Space Force. Though its implementation has so far amounted to farcical bureaucratic battles with the Air Force over funding and jurisdiction, the Space Force represents space as another realm for warfare. Of course, the space race of the ’60s carried the recognition that the same technology that could take a cosmonaut to space could take a Soviet warhead to New York or Washington. But space has also been an avenue for international cooperation. President Kennedy, shortly before his assassination, called for a joint U.S.-Soviet mission to the moon. Even today, space is one of the few avenues where the United States and Russia cooperate.

Equally worrisome is the prospect that space exploration could become less inclusive of all Americans. The Trump administration proposes to take $1.6 billion dollars from educational Pell grants to fund NASA. Needless to say, if one destroys the educational opportunities of low-income and disproportionately minority Americans, they cannot go on to be astronauts.

Review: “First Man” is an apolitical look into one of history’s biggest moments
John Anderson

This sort of policy will only embolden voices like Scott-Heron’s, making it seem as if the resources dedicated to space come at the expense of people left behind on Earth. Mr. Hernandez, the Mexican-American astronaut, has weighed in strongly against this spending shift.

As we approach the 50th anniversary of the moon landings, the U.S. space program, like so many other aspects of our global and moral leadership, is in disarray. Mr. Trump issues conflicting tweets, promising to spend resources to return to the moon one day, then seeming to complain about the costs the next. He is more attracted to erecting new walls, not only against Mexico but even in President Kennedy’s ancestral Ireland (a potential result of Brexit).

One threat is the militarization of space in the name of Trumpian nationalism, notably the saber-rattling idea of the Space Force.

But for Americans looking for the promise of a New Frontier, space still beckons. President Kennedy answered the question “Why the moon?” with another: “Why climb the highest mountain?” The commitment to put a man on the moon within a decade served little practical purpose, except the creation of purpose itself, a purpose the whole world could embrace.

Kennedy was on to something. Spacefaring has benefits more intangible than any scientific discovery, or even the creation of jobs where rockets are built. If the frontier of the U.S.-Mexico border represents the America that would exclude me, space is the frontier that invites me. In a world full of grievance and hatred, a unifying purpose on a frontier freed from history, pioneering on to truly new worlds, is exactly what we need.

Antonio De Loera-Brust is a first-generation Mexican-American from Davis, Calif. He is a graduate of Loyola Marymount University in Los Angeles, a former Joseph A. O’Hare, S.J., fellow at America and a congressional staffer in the U.S. House of Representatives.

Another Trump hit piece. This time raising the false claim of racism.

False claim of racism? The Justice Department fined Trump money because of his refusal to rent to blacks. I don't know what your values are, but for me, that is overwhelmingly pure racism.

You just proved my point. The incident you describe was 45 years ago when Trump was 26 years old and was settled a couple years later. Thank you. You never fail to support me by providing irrelevant or bogus things. By the way Jesse Jackson doesn’t agree with you. He is on record praising Trump for his inclusive efforts.

The evil deeds of the past are set in concrete. The only possibility to overcome the evils of the past lies in the present and future.

I'm confused. This gentleman is on a Congressional staff in Washington DC. This does not seem like a inferior job opportunity to me. Meanwhile the new President of El Salvador on behalf of his country has accepted the responsibility for the death of the father and child who drowned in Mexico trying the ford the Rio Grande River. I read that some Latino American's blame the US government for decades if not centuries of exploitation, discrimination and hostility toward native peoples and the expropriation of native lands. Whose money is supposed to remedy these injustices? People who were born long after these events occurred? Collective guilt directed toward innocents does not seem like a good idea to me, especially if you were never born when all this occurred. By the way detention centers did not begin the day that Donald Trump was inaugurated. Some folks thought that President Obama was "the one who we have been waiting for" almost a Messiah like expectation. I recall President Obama being called the "Deporter in Chief" after repeatedly asserting he had no authority to legalize dreamers. Congress, who employs Mr. De Loera -Brust, has recently passed a funding bill to address humanitarian border issues. This legislation could and should have been passed years ago. If the Dem's had gotten on board earlier, it could have been passed in the first two years of the first Obama administration when the Dem's controlled both houses of Congress.