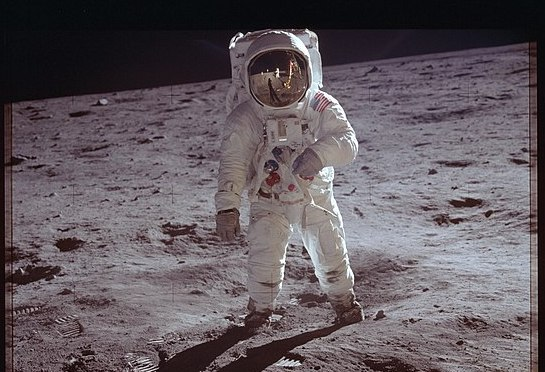 Buzz Aldrin is photographed by Neil Armstrong during the first moon landing in 1969. (Wikimedia Commons)

“We choose to go to the moon…” Even after 57 years, those words that President John F. Kennedy spoke at Rice University in Houston, Tex., extolling the benefits of space exploration, still excite the imagination and provoke wonder at the audacity of it all. This summer will mark the 50th anniversary of that historic moment when Neil Armstrong stepped onto the Sea of Tranquility and spoke the immortal words that were etched into the memories of everyone who watched television on that July evening in 1969. The culmination of President Kennedy’s vision, the lunar landing (which he sadly did not live to witness) was the seminal event of a decade that began with promise and ended with sorrow, including assassinations, wars and social upheaval. American Moonshot is Douglas Brinkley’s exciting narrative of how it all came to pass.

As Brinkley recounts, he was just an 8-year-old in Ohio when his fellow Ohioan, Neil Armstrong, made his “giant leap.” The Saturn V era fascinated many of Brinkley’s generation (myself included—it happened one day before my eighth birthday, and it was a “present” I have never forgotten). That feat was essentially an American one, for it embodied that quintessential characteristic that is ingrained in our psyche and that we invested in the astronauts: the thrill of adventure. J.F.K. put his finger on it when he said that it would take the skills and talents of all Americans to put them “there,” on the moon—for it was the work of us all.

J.F.K. put his finger on it when he said that it would take the skills and talents of all Americans to put them “there,” on the moon—for it was the work of us all.

From the start, Brinkley posits that Moonshot is actually the story of Kennedy’s own space race and the space race’s influence on Kennedy’s vision. It is ironic that J.F.K. is so closely linked to Apollo history, given that early on, he was something of a “space skeptic”; like many others, he wondered if the resources could have been put to better use in other fields. He slowly came to realize, though, that the space program could have unforeseen positive consequences, economically, scientifically, socially—and politically, given the Cold War rivalry between the United States and the Soviet Union. It appealed to Kennedy’s idealistic, historical and, frankly, romantic nature, because it was a challenge to be met, one that could be used for the benefit of mankind and for peace. Applying the nautical images he so loved, he viewed it as a “new sea” on which to set sail.

Douglas Brinkley’s fascination with this subject shows on every page. Part biography, part history, it is all pure adventure, something we need to be reminded of in a time when the “can do” spirit in our country and world is sorely lacking and much needed.