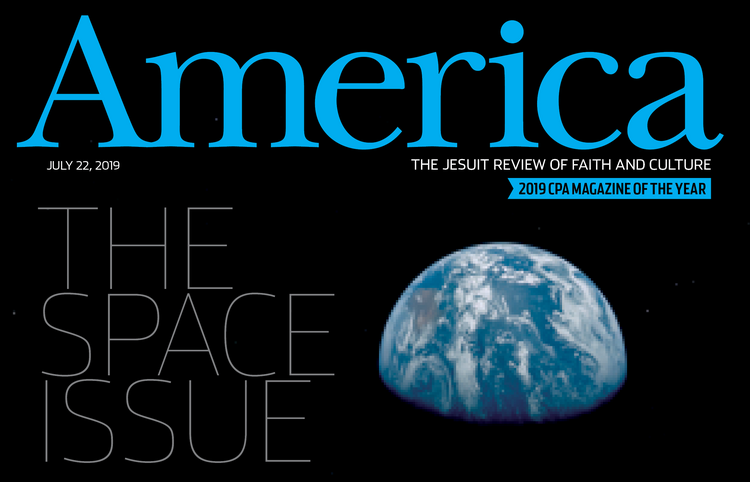 Fifty years ago, this summer, President Richard M. Nixon received the longest long-distance telephone call in history—from the astronauts of Apollo 11, who had just taken “one giant leap for mankind.” Soon after, the editors of America reflected on the moon landing: “The journey of Apollo 11,” they wrote, “embodies profound significance for America and the world, we are all convinced. But we are still struggling to discover what that significance may be.” Five decades on, that work continues.

The anniversary provides not just a moment for nostalgia but an occasion to revisit the values that should inform our public judgement. Last year, President Trump directed the Pentagon to begin planning for a space force. The militarization of space is a frightening prospect. We would do well to recall the words of another president, the one who set this country on its course to the moon: “Space can be explored,” President John F. Kennedy said, “without feeding the fires of war, without repeating the mistakes that man has made in extending his writ around this globe of ours.” Amen to that.

Why the U.S. going to the moon still matters to immigrants
By Antonio De Loera-Brust

What would a chapel on the moon look like? Catholics in the ’60s had some ideas.
By James T. Keane

Why do Catholic priests keep popping up in sci-fi?
By Tom Deignan

Why are so many craters on the moon named after Jesuits?
By William Critchley-Menor, S.J.

Review: One giant leap for mankind
By Joseph McAuley

Check out the full issue here.

Couple things:
If you are in Orlando for any reason, Cape Canaveral is a little over an hour away. It’s well worth most of a day visit. A friend recently went to a SpaceX launching there.
The best website for space issues is Behind the Black, https://behindtheblack.com