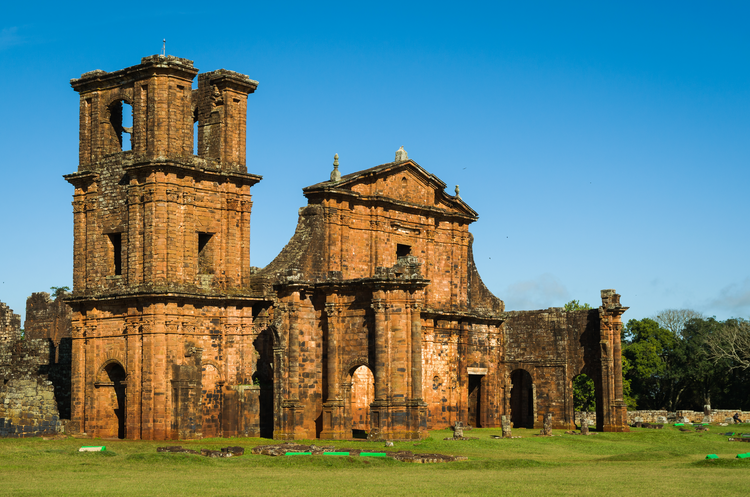 The ruins of São Miguel das Missões, a 17th-century Jesuit mission in Rio Grande do Sul, Brazil, now preserved as a World Heritage Site by the United Nations. (iStock/Thiago Santos)

“Is this work making any difference?” It is a question that we all ask individually, and that every religious institution asks regularly. Much of the time, there is no satisfying answer. As Óscar Romero once said, “We are workers, not master builders; ministers, not messiahs. We are prophets of a future not our own.”

But a recent study from the University of British Columbia suggests that the impact of the Jesuit missions founded in the 17th century in South America, also called reductions, is not only measurable but far greater than anyone could have expected.

As part of his dissertation on the long-term persistence of human capital, economics professor Felipe Valencia Caicedo studied 30 Jesuit missions in once-remote areas of Brazil, Argentina and Paraguay. He focused on how the areas around the reductions have changed over the 250 years since the Jesuits were thrown out of the Spanish empire in 1767.

The impact of the Jesuit missions founded in the 17th century in South America is not only measurable but far greater than anyone could have expected.

He discovered that in everything from literacy and skills training to overall levels of education, the areas around the former Jesuit missions continue to show significantly higher levels of achievement than equivalent communities without missions—with median years of schooling and literacy levels 10 to 15 percent higher, and modern per-capita incomes nearly 10 percent higher. These areas also show the persistence of skills that can be quite specific, and Mr. Valencia offers the example of embroidery. “We know for a fact that this was introduced to the area by Jesuit missionaries, who were mostly coming from the Low Countries,” he explains. “They bring this European technology or distraction or hobby, this innovation. And it turns out today there is more embroidery in former Jesuit municipalities” than elsewhere in Brazil.

“They’re there for 150 years,” he says of the Jesuit missions. “By the time they leave there are eight generations that have been trained and educated in these Jesuit ways, so to speak.” And apparently, the impact on local culture was more or less permanent. “There are these mechanisms of transmission of knowledge that are still present today,” Mr. Valencia says, including parents passing on knowledge to their children.

“By the time they leave there are eight generations that have been trained and educated in these Jesuit ways, so to speak.”

More strikingly, those effects extend hundreds of kilometers out from the original reductions. Mr. Valencia posits that this is a result of migration; over time people whose families had been in contact with the missions migrated away, and they took that set of experiences and mechanisms with them. Meanwhile, he says, those who immigrated to the area after the Jesuits left did not come to share the locals’ arc of advancement: “I don’t find that foreigners in these areas have higher human capital; if anything it would be the opposite.”

Mr. Valencia notes that other religious groups that had missions in the area do not demonstrate the same long-lasting impacts. “The Jesuits and the Franciscans both wanted to convert souls to Catholicism,” he explains. “Both were Europeans, both were doing these missions basically in the middle of nowhere, these subtropical forests which were very isolated. But what they did in them was very different.” While the Jesuits concentrated on education, the Franciscan focus was more on care for the poor and sick. “Those are both completely valid conversion strategies,” Mr. Valencia says, but the Franciscan communities do not show the same long-lasting development of human capital.

Mr. Valencia says that the Jesuit mission areas seem to be imbued with a greater ethical sensitivity.

Does that difference mean that religion itself played no part in the positive long-term impact in the Jesuit-sponsored communities? Mr. Valencia notes that certain Jesuit ideas, “things like striving for excellence, development of the full person” or personal autonomy—“Am I the commander of my own destiny, my own life?”—certainly persist in former reduction areas. But it is difficult to prove that the persistence of these values is directly tied to Ignatian spirituality.

And yet Mr. Valencia says that the Jesuit mission areas do seem to be imbued with a greater ethical sensitivity. He describes research games where individuals are told to flip a coin nine times; if they get heads five times or more, they will win a prize. The game works on the honor system; the moderator will not check to make sure whether they actually flipped enough heads or tails. “In general, people systematically cheat,” Mr. Valencia explains. “It’s very well known. But what’s interesting is, in Jesuit mission areas they cheat less. Whereas in the Franciscan mission areas if anything they [cheat] more.”

“I don’t want to get in trouble with the Franciscans!” he insists, laughing.

In another game, built around people being given money and told they can share it or not, “again, we find higher measures of altruism in former Jesuit missions.”

Pope Francis to Jesuits: Be present “in the deserts of humanity”
Gerard O’Connell

Beyond all this, Mr. Valencia’s research confirms long-accepted findings that education is in a sense self-perpetuating. That is, the more educated you are, the more able and open you are to learning more and adapting further. So in Brazil, he notes, when genetically modified seeds were introduced, those whose ancestors had been taught by the Jesuits “are faster to adopt this technology.”

“Because of this prior historical shock [i.e., the Jesuits’ presence and education], now you can adopt faster.”

Some might see Mr. Valencia’s research as suggesting the Society of Jesus accomplishes a greater good through education than through direct service to the poor—an ongoing topic of debate among Jesuits for decades now. “Poverty alleviation programs are good,” Mr. Valencia says, “but what we do find is that investments in human capital seem to be very long-lasting.” Still, he cautions that his research is limited to isolated communities; it is far more difficult to evaluate the impacts of different initiatives in big cities, where there are so many other factors at play.

Mr. Valencia’s findings also beg this question: If the effects of education not only last far beyond the actual presence of the Jesuits but continue to develop and increase, is there really a need for Jesuits to continue to stay in places that are already long established? Do we do more for the church and world by continuing to work at the same schools for centuries or by moving on to new ventures—as St. Ignatius himself did?

I recommend the movie "The Mission." See https://www.imdb.com/title/tt0091530/. About Jesuits near Iquazu Falls in the 1700's. Available on Amazon for streaming. Robert de Niro and Jeremy Irons,

For me "The Mission" ranks as one of the best directly religious films I've seen. Jeremy Irons was superb. It's great to see that the fruits of the work are palpable! I would also mention"A Man for All Seasons" and "The Hiding Place" as other directly religious films that are well made and inspirational.
Later: "The Mission" should be balanced off with the film "Black Robe" which portrays the Jesuits in eastern Canada. It's a beautiful film but makes clear the meager results from the point of conversions. It would be interesting to see whether those early efforts bore fruit.

The Jesuits left a remarkable legacy in Paraguay as well as Bolivia. An example is music. Troves of Baroque manuscripts have been recovered in the Bolivian lowlands and now the music is being played. See the New York Times article: https://www.nytimes.com/2018/05/08/world/americas/bolivia-baroque-music.html

Don't waste your money on monthly or annual packages of TV Channels. USTVNow provides a free and secure place to watch unlimited TV channels. Now, you can easily watch Live TV Shows in your Mobile, PC or Laptop, Kodi, etc. Get the direct link to download http://www.entreevous.com/

The Jesuit "reductions" were the Order's first try at socialism. How'd that work out?