Pope Francis to Jesuits: Be present “in the deserts of humanity” 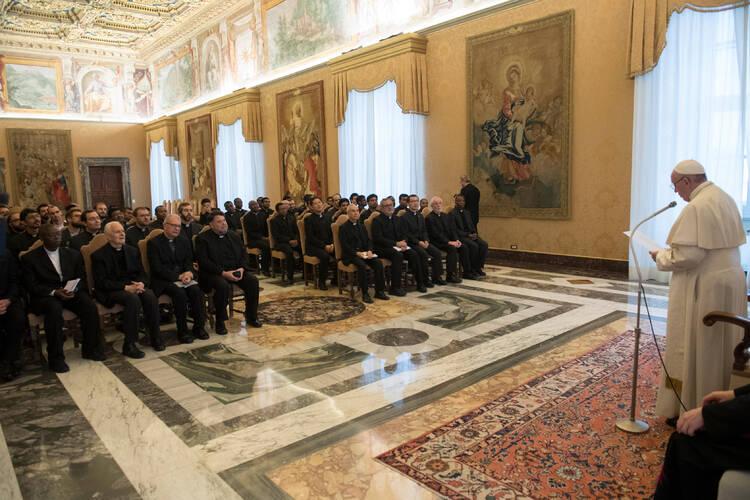 Pope Francis leads an audience with faculty and staff of the Jesuits' International College of the Gesu at the Vatican Dec. 3. (CNS photo/Vatican Media)

“Blessed are you when people say bad things about you, calumniate you and persecute you,” Pope Francis told the staff and students of the International College of the Gesu in Rome when he greeted them on the 50th anniversary of its founding by Pedro Arrupe, the Father General of the Jesuits.

He urged them to celebrate this golden jubilee by “revisiting” their roots in the family in which “God regenerated” them, and in which they professed their “belonging” to him. He encouraged them to “ground” or anchor themselves “again in Jesus, in his life,” and to “say no to living for oneself” but “to reaffirm that, like Jesus, we exist for the Father; that, like Jesus, we live to serve, not to be served.” He reminded them that “for the life of a Jesuit, the Passover of the Lord is sufficient.”

Although he was addressing some 60 staff and students from the Gesu in Rome, Francis’ message seemed to be addressed to the worldwide Jesuit community.

Although he was addressing some 60 staff and students from the college’s international community, Francis’ message seemed to be addressed to the worldwide Jesuit community, the largest religious order in the Catholic church with its 16,088 members, including more than 11,000 priests in 112 countries (2017 statistics).

He urged his audience to return to the second week of the Spiritual Exercises and “the colloquy on service to be like Jesus, to imitate Jesus, who emptied himself, annihilated himself even to obedience to death,” and he reminded them that the colloquy carries them to the point “of asking with insistence for calumnies, persecutions, humiliations.” He told them: “that is the criterion, brothers! That is your road.”

These words of the first Jesuit pope could also be read as almost autobiographical given the present difficult moment in his pontificate. His remarks can be seen also as a recognition for the Jesuits who have been persecuted and killed in recent years, and others who have been defamed.

In his talk, delivered in Italian, Francis recalled that today is the feast of the great Jesuit missionary, St. Francis Xavier, who urged his companions, “I beg you, in all your things, ground yourself totally in God.”

Francis reminded his fellow Jesuits that they are called to “grow by sinking the roots” and said, “to have roots is to have a well grafted hearts which in God is capable of dilating” or becoming larger and so seek the “ever greater” things for God, “the magis,” in life like St. Francis Xavier who remarked “I have not stopped for an instant.” The Argentine pope added, “if a heart does not expand, it will atrophy.”

He reminded them however that “there is no growth without crisis” but told them “do not be afraid of crisis, do not fear” because “without pruning there is no fruit, nor victory without a fight.” To grow, to put down roots means “to fight without ceasing against all spiritual worldliness” which, he said, Henri de Lubac, S.J., described as “the worst evil that can happen.”

Francis told the Jesuits, “spiritual worldliness leads you to clericalism,” but if their growth “is a constant acting against one’s own ego, then there will be much fruit.”

He pointed to “two positive signs of growth: freedom and obedience.” These are two virtues “that progress if they walk together,” he said. Freedom “is essential” because “where there is the Spirit of the Lord there is freedom.” He said the Spirit “speaks freely to each one through sentiments and thoughts” and cannot be locked up. He prayed that they may be “free sons, united in diversity, struggling every day to conquer the greater freedom: that from oneself.”

In this struggle, he told them, “prayer will be of great help”; they “should never neglect prayer.” He reminded them that this was “the inheritance” that Father Arrupe had left them, “it was his swan song.”

As a young Jesuit, Francis met Father Arrupe in Argentina and was clearly impressed by him and, as pope, he has prayed at his tomb on a number of occasions. Today he urged his companions in the Society of Jesus to read the conference that Arrupe gave to the Jesuits in the refugee camp in Thailand. He recalled that after giving that talk, he took the plane back to Rome and on arrival there had the stroke—“ictus”—that dramatically changed his life.

In his talk to the Jesuits today, Francis used three verbs to express his ideas: to ground (one’s life in Jesus), to grow (through fighting against one’s own self) and to mature.

He elaborated the final part of his talk around this third verb: “to mature.” He told the Jesuit, “one does not mature in the roots and in the trunk (of the tree), but by producing fruits that fertilize the ground with new seeds.” This is “the mission,” he stated.

Speaking of the mission, he recalled Saint Paul VI’s talk to 32nd General Congregation of the Jesuits, Dec. 3, 1974, in which he said, “Wherever in the Church, also in the most difficult fields and at the front, in the crossroads of ideologies, in the social trenches, where there has been and where there is the confrontation with the burning needs of man and the perennial message of the Gospel, there the Jesuits were and are.”

Francis, who sees his own ministry as Bishop of Rome as in close continuity with that of St. Paul VI in implementing the Second Vatican Council, remarked that those words were part of a message “which, I think, were perhaps the most profound of a pope to the Society.”

Elaborating on the words of the second last Italian pope, Francis concluded by reminding Jesuits that they are called to be present “at the most intricate intersections (hubs), at the borderlands and in the deserts of humanity.” There, he said, the Jesuit “may find himself as a lamb among wolves, but he must not fight the wolves, he must only remain a lamb. In that way the Shepherd will reach him there, where is his lamb.”

All my life it has been my impression that the entire Jesuit community dwelt in the ivory towers of higher academia exuding an air of arrogant superiority and intellectual pride while conforming to every tide of absurd and nonsensical intellectual fashion so as to avoid being a sign of contradiction and a witness to supernatural truth.

The idea that they are lambs amongst wolves strikes me as arrant nonsense.

The group has strayed so far from the spirit of its founder, it is time to just close it down having outlived any usefulness to God and man.
I'll grant Matteo Ricci and Francis Xavier as the pinnacle of their service to God and man, pity the destruction of their missions was so much contributed to by insisting on Roman culture rather than acculturation.
Pierre Teilhard de Chardin is a yet to be properly disowned and debunked embarrassment.

Also, it is only fair to praise the witness of Gerard Manley Hopkins who as a celibate homosexual gave witness to his awareness that it was a thorn in his flesh rather than an alternative normal.

Don't hold back Phillip--tell us what you really think about the Jesuits.

Amidst the hyperbolic phrases and red meat attacks here, this one line that did catch my eye:"the destruction of their missions was so much contributed to by insisting on Roman culture rather than acculturation." Really? Is this what their history bears out? Given all your other comments I was surprised to read you fault the Jesuits for this. But then came the next sentence in which you condemn de Chardin. Ah, that sounds a bit more like you!

The post is really superb. It’s varied accessory information that consists during a basic and necessary method. Thanks for write me a dissertation sharing this text. The substance is genuinely composed. This web log is frequently sharing useful actualities. Keep sharing a lot of posts.

Very good lesson by Pope Francis to people and we all should try to perform these things in life and the blog you shared is very beautiful in this blog and talk of Pope Francis have lots things to learn thanks from Assignment-tutor for this blog.