How L.A.’s Catholic schools are growing when so many others are closing 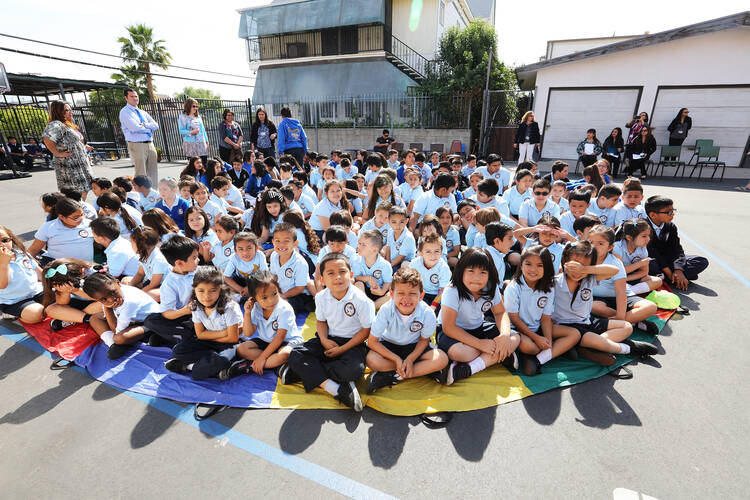 Students at Our Lady of Loretto school in Los Angeles during an “Aid for Ecuador” April 21, 2016 event organized by the Los Angeles Missionary Childhood Association. Photography by Victor Alemán

What most stands out upon meeting Dr. Kevin Baxter, superintendent of Catholic schools for the Archdiocese of Los Angeles, is his restlessness. Even early on a gray Friday morning, the archdiocese’s 266 schools just underway, Mr. Baxter radiates energy.

“Our vision is growth,” he says. “We’re the largest archdiocese in the country, largest Catholic school system in the country, about 80,000 kids, and we still feel like we’re underserving our population. We firmly believe that we can grow significantly.”

It is not the story we have grown accustomed to hearing about Catholic schools. In 2016-17 enrollment in the United States was slightly under 1.9 million, a drop of 17.6 percent from 10 years ago and the lowest in a century. Over the same 10 years, nearly 20 percent of U.S. Catholic schools were closed or consolidated, 1,511 institutions in total.

“Our vision is growth. We’re the largest archdiocese in the country, largest Catholic school system in the country, and we still feel like we’re underserving our population."

But those years also saw 314 new Catholic schools opened. And in the archdiocese of Los Angeles, where numbers have been mostly steady since 2010, the Catholic population is growing.

Mr. Baxter estimates the archdiocese is currently serving just 8 percent of the Catholic school-age population, less than one in 10. “Can we get to one and a half? Or two?” he asks. “People here don’t feel like that’s a pollyannish goal. That’s something we could actually accomplish.”

One striking aspect of the archdiocese’s strategy is its openness to new approaches. Seeing local interest in a public school’s dual-language immersion program (students from kindergarten on are taught in two different languages), in 2012 the archdiocese started its own, offering not only Spanish-English but also one of the only two Mandarin-English programs in the country.

Today it has six language-immersion schools and amid widespread interest plans to open 14 more. “We have lots of English-language learners in our schools, and this program helps support them. But where dual language has the most interest,” Mr. Baxter notes, “is in the Caucasian, English-speaking communities. [And] in the Mandarin classes they’re Caucasians; they’re Latinos; they’re Eastern Europeans.”

When the archdiocese began exploring a Korean-English option, local community members had an unexpected response: “The Korean families said, ‘We’ll take care of the Korean; we want them in Mandarin or Spanish.’”

The first dual-language programs began at elementary schools that had recently been closed, highlighting the archdiocese’s unique approach to struggling schools. “If a school has to cease operations, our question always is: Can we restart it at some point?” says Mr. Baxter. “Does it take a reset—do some infrastructure work and reopen it in a new model?”

Mr. Baxter also wonders if a modernized vocational program might serve some archdiocesan high schools. “All of our schools are college prep, which they should be, we would never advocate for them not to be,” he explains. “But only 30 to 40 percent of the adult population have a college degree, meaning 60 to 70 percent does not. Are we open to serving those people, too, in our Catholic schools?” He imagines a Catholic school in Hollywood that could offer training in the many technical jobs of the entertainment industry or one that provides a pipeline to work at nearby spacecraft startup Space-X.

Again and again, Mr. Baxter comes back to the same questions: “How do we get more innovative and more creative?” The necessity for creativity is clear. The traditional Catholic school reliance on tuition grows more difficult to sustain, Mr. Baxter says. “We have to think of ways to provide support for parents.”

“Catholic schools are, especially in urban environments, serving a population that almost exactly mirrors the public schools as far as income and ethnicity. That’s how we’ve always existed, and that’s how we need to be.” But for many such families, paying for Catholic elementary school can be as challenging as university tuition. “I would love to see some type of justice as regards parent choice.”

Why I took my fifth-grade Catholic class on a field trip to a mosque
Gregory J. Landrigan

Charlottesville and Trump: A spiritual exercise for the overwhelmed and exhausted
Jim McDermott

Perhaps the biggest challenge faced, however, by many students and staff in the archdiocese right now is the federal government. After a year of disturbing campaign rhetoric, the day after Donald Trump’s election “kids were terrified about their abuelas [grandmothers] getting deported, or their parents,” says Mr. Baxter.

The first week of his administration the president signed an order opening the door to mass deportation. After saying repeatedly that he would not seek to deport the 780,000 young people brought without documentation to the U.S. as children, President Trump announced in September that the Deferred Action for Childhood Arrivals program was being rescinded in six months. A quarter of those affected live in California.

The impact on students is enormous. “If a kid’s perceiving there’s a potential threat, they can’t really learn effectively,” Mr. Baxter points out. “It’s [Abraham] Maslow’s hierarchy of needs,” he says, referring to the American psychologist’s theory on human motivation. “You’ve got to have your immediate safety, security kind of needs [met] before you can get to actualization, understanding and learning.”

This is making for a difficult and uncertain time in Los Angeles Catholic schools. But talking to Mr. Baxter make it abundantly clear: This school system moves forward with courage and hope. And it does not give up.