No one can win the Communion wars over abortion 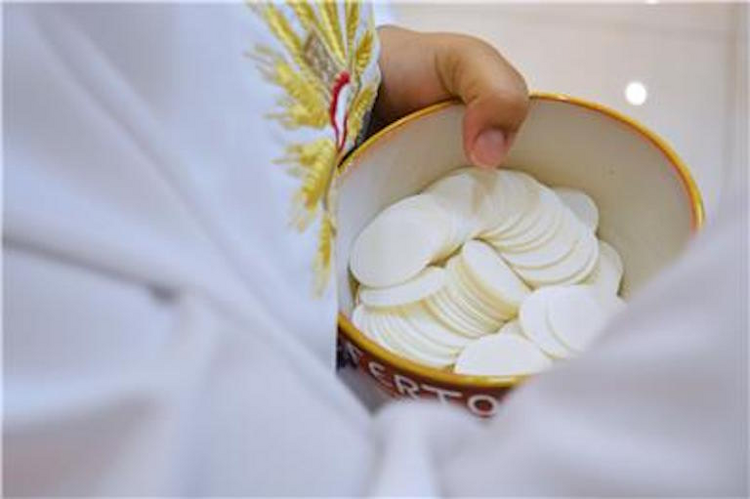 Yesterday, America reported that Cardinal Luis F. Ladaria, S.J., head of the Congregation for the Doctrine of the Faith, had sent a letter to be shared with every bishop in the United States, warning that a proposed discussion over a national policy about pro-choice politicians receiving Communion could “become a source of discord rather than unity.” Cardinal Ladaria said that only after an “extensive and serene” two-stage dialogue, first among the bishops themselves and then with pro-choice politicians, should formal discussion of such a policy begin.

In other words, the C.D.F. just pulled the brake on the possibility that the U.S. bishops might do something definitive on this topic at their June meeting. But even in the exceedingly unlikely event that every bishop miraculously agreed on how to approach the question of Communion and abortion after a lengthy dialogue process, it still would not resolve the political question of abortion in favor of the Catholic position. And insofar as the debate over Communion for politicians absorbs and consumes the political and evangelical energy the Catholic Church devotes to the pro-life cause, it is being tragically misdirected. Such efforts are far more likely to entrench partisan divisions ever deeper into the life of the church than they are to draw hearts and minds to the cause of defending unborn life. In fact, their most probable effect will be to push some Catholics to greater distrust of the church’s advocacy against abortion.

Even if every bishop miraculously agreed on how to approach the question of Communion and abortion, it still would not resolve the political question in favor of the Catholic position.

Some form of public argument over Communion was inevitable once Joseph R. Biden Jr. was elected as our second Catholic president. It was already brewing before the election in the debates over whether Catholics could vote in good conscience for Mr. Biden or any other pro-choice Democrat. It accelerated when Archbishop José Gomez of Los Angeles, the president of the U.S. Conference of Catholic Bishops, announced a special working group to address the “difficult and complex situation” of working with Mr. Biden. That group concluded its work at the beginning of March, recommending to the bishops’ doctrine committee that it produce a document on “eucharistic coherence.”

In the last few weeks, bishops have argued publicly—including in the pages of America—both for and against such an approach to the question of politicians receiving Communion. Archbishop Samuel Aquila of Denver warned against a “near-exclusive pedagogy of acceptance” with regard to approaching the Eucharist, describing it as “a question of charity toward our neighbor,” both in the witness politicians offer the church and the world about moral truths through their votes and also in the witness the church and bishops offer to politicians about the spiritual consequences of their actions. Bishop Robert McElroy of San Diego argued such an approach is understandable as part of an ardent desire to protect the unborn but warned that it will have “destructive consequences—not because of what it says about abortion, but because of what it says about the Eucharist.”

I agree with Bishop McElroy that the theological reasoning around a national policy barring politicians from the Eucharist is destructive because it tries to achieve coherence through exclusion without enough concern for encouraging conversion. But while that point ought to be sufficient to warn the bishops away, it is not the only reason to avoid this course of action. A policy of exclusion will have destructive consequences not only because of what it says about the Eucharist but also because of what it says about abortion and the way the church advocates for the defense of human life. By making abortion into a litmus test which predetermines how Catholics must vote in every circumstance, by failing to engage with the complex prudential considerations around how to vote and legislate so as to protect unborn life, the church’s voice on abortion is heard as merely partisan advocacy rather than as a cry for justice and an integral part of the common good that all politics ought to seek.

By making abortion into a litmus test for how Catholics vote, the church’s voice on abortion is heard as merely partisan advocacy rather than as a cry for justice and an integral part of the common good that all politics ought to seek.

The first scenario—though deeply unrealistic—needs be considered because it is presumably what those advocating for barring pro-choice politicians from Communion are hoping for and aiming for, under the best possible interpretation of their motives. In this picture, the bishops definitively bar politicians who support legal abortion from the Eucharist, and President Biden, after decades of ignoring or misunderstanding his moral obligation to oppose abortion, has a change of heart driven by his hunger for the sacrament. He becomes convinced that he must work to protect the unborn.

What happens next, though? Does Mr. Biden start appointing Supreme Court justices similar to those chosen by the previous administration? Of course not; he still believes in the rest of his political agenda, and decades of polarization regarding constitutional questions means that potential nominees who support, say, expansive protection of voting rights while also being likely to view Roe v. Wade as wrongly decided simply do not exist. Nor would Democratic senators magically become willing to confirm such unicorn nominees. Nor would Republican senators be likely to cross the aisle to hand Mr. Biden a win if he did find such a nominee.

Setting Supreme Court nominations to the side, perhaps Mr. Biden simply reverses himself on the Mexico City policy or returns to his longstanding support of the Hyde Amendment restricting federal funding for abortions, both of which would be very positive developments. Would that be enough to restore him to Communion, even if—as would happen—the rest of the Democratic establishment opposes him tooth and nail while Republicans capitalize on the intra-party squabbles? Is it sufficient to publicly state his opposition to abortion on this sort of question while being unable to fully act on it, or must eucharistic coherence be understood to demand that he subordinate the rest of his policy agenda to his hoped-for change of heart on abortion?

A second scenario might be that the bishops issue a document sternly warning pro-choice politicians not to receive Communion, and Mr. Biden publicly objects to it, whether or not he agrees to refrain from receiving Communion. Maybe he continues to go to Mass without receiving, or more likely, the archbishop of Washington remains committed to his stated position of not barring him, and he continues to receive, since the Vatican is unlikely to approve the conference overriding an individual bishop on this matter, as Cardinal Ladaria confirmed in his letter yesterday.

This scenario of public response from Mr. Biden, however, is also unlikely, given his practice of silence in response to bishops criticizing him and his general avoidance of discussions on abortion whenever possible. But if Mr. Biden did respond publicly, it would only make him a spiritual martyr for the pro-choice cause, obligating him more deeply to that part of the Democratic base. Whatever the bishops may or may not hope for, this is the outcome that would most benefit extremists in both political parties.

Finally, the third and most likely scenario is that the bishops’ conference expresses some public concern about reception of Communion by pro-choice politicians without drawing a clear line in the sand. (The C.D.F.’s recent intervention, however, may work against this outcome.) Whether or not Mr. Biden continues to receive Communion regularly, he does not respond publicly and makes no policy change in his approach to abortion. The latest round of Communion wars remains an open wound in the life of the American church. The endless debates over whether or not then-Cardinal Joseph Ratzinger’s 2004 letter (which Cardinal Ladaria reminded the bishops remained “private”) settled the question evolve into endless debates over whether the 2021 action by the bishops' conference, whatever it might be, settled the question. Many Catholics continue to accuse each other of bad faith for holding one position or the other. For Catholics less attuned to the back-and-forth of these ecclesial debates, this episode reinforces the rhetorical importance the bishops place on political opposition to abortion but does little else.

None of this can be fixed by barring some politicians but not others from receiving Communion.

None of this can be fixed by barring some politicians but not others from receiving Communion. That approach aims more at eucharistic compliance than coherence. It may be possible to make an abstract distinction in moral theology between degrees of culpability, intentionality and scandal with regard to different varieties of political incoherence with the Gospel. But it is impossible for such a distinction to have an effect that is authentically pastoral rather than nakedly partisan.

If what the church wants—as the Gospel calls us to—is to help fellow Catholics and fellow citizens recognize unborn human beings as members of the human family possessed of sacred dignity and deserving protection in law, then barring politicians from receiving Communion will not work. It cannot do what its proponents hope for. At best it will have no effect on the politics of abortion, and at worst it will provide partisan cover for absolutist rejections of any incremental compromises that may be possible.

Judged prudentially and pastorally, the only effect the Communion wars are likely to have is to further divide Catholics and convince many that their bishops are captive to a single issue and a single party. As Catholic political witness is narrowed, it becomes steadily less effective at changing minds and more likely to be exploited as a source of partisan outrage. Demanding eucharistic compliance cannot achieve eucharistic coherence—and it will damage whatever credibility the church still has to care about abortion as a matter of justice rather than a lever for politics.