Talking to Jesus about voting, and listening for freedom rather than fear 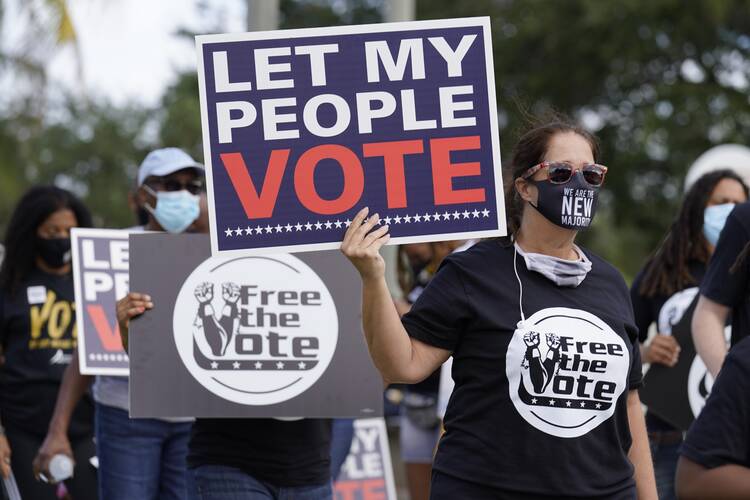 According to some commentators who claim to speak on behalf of the church, the 2020 election presents no real decision for faithful Catholics. Because Joe Biden supports abortion and because Donald Trump opposes it, they say that Catholic teaching demands a vote for Mr. Trump and against Mr. Biden. Some have taken this fearmongering even further, claiming that no Catholic can be a Democrat or describing the prospect of a Biden presidency as “staring into the abyss.”

This is a form of theological and spiritual disinformation, a kind of “fake news” and, even worse, a false Gospel. It claims to speak in the name of God, and yet it traffics in fear rather than hope. Its rhetoric aims to dominate the consciences of others, even while superficially claiming that it is only shouldering the duty of forming conscience. It neither leads people to freedom nor trusts them with it. There are robust theological arguments—both about what Catholics must take into account when voting and about the kind of moral decision that voting is—to explain why and how faithful Catholics may reach different conclusions, in good conscience, about how to vote. We’ve published many of them here at America.

[Related: The Top 3 Reasons That Catholics Will Vote for Trump or Biden]

But this nuance, while vitally necessary, is not a sufficient response to the fearmongering and attempted domination of conscience unfolding in some corners of the U.S. church. Those who are telling Catholics they can vote only one way are not just distorting theology but also wounding people spiritually and pastorally, subordinating the good of the flock to the goals of a political outcome. They need to be confronted not only with theological distinctions but also with spiritual freedom and pastoral honesty.

I began to realize how damaging this kind of rhetoric could be when someone asked me a question on Twitter that was clearly supposed to shame me into the realization that only one issue mattered and only one kind of vote was permissible. Here’s how the question ran:

Using Ignatian spirituality, imagine walking up to Jesus and asking: “Master, can I support a man and woman that will rule this land in some ways that are just, but who support killing of unborn children in the womb?” Jesus keeps responding, “Get behind me, Satan!” Thoughts?

There is a lot going on in this question, very little of it good. First, it was responding to an argument that Catholics could vote for either Democrats or Republicans, not that they had to or should vote for the Biden-Harris ticket. Rather than appealing to a free discernment, it started off trying to depict one potential choice as solely evil, forcing the other choice by default. Second, it assumed that I had not already been praying about this question, instead instructing me as to how to begin. Third, in addition to framing a leading and one-sided question to Jesus, it presumed Jesus’ answer, suggesting that the appeal to prayer is merely pro forma, rather than an invitation to hear God speaking freely in one’s own conscience.

Those who are telling Catholics they can vote only one way are not just distorting theology but also wounding people spiritually and pastorally.

But those failings are also, in a kind of negative relief, indications about how one might actually pray about these issues—both about how to vote but, perhaps even more important, about how to resist and unmask the false teachers and spiritual disinformation that tell you that the decision has already been made for you.

I had already been praying about how to vote. But when I prayed about the experience of being asked this question, here’s how my conversation with Jesus went.

“You seem anxious and troubled by this question. But who told you that you had to ask it this way? Do you think I would say ‘Get behind me, Satan!’ to you because you are thinking about refugees and immigrants and the poor alongside unborn children? Do you think I want you to pay attention only to some of the ‘least of these’?”

You want me to pay attention to all of them, Lord. That’s clear. But I don’t see how, because we face terrible choices in this election, and every option we have seems to result in supporting some evils while ignoring others.

“What do you read in the Scriptures? How do I ask you to love?”

You ask me to love God with all my heart and mind and strength and to love my neighbor as myself. And you tell me that my neighbor is everyone wounded, vulnerable and in need: unborn children and their mothers, immigrants, the poor, those suffering from racism, those sick and vulnerable to the pandemic, all of them.

“Do you think I can choose just one?”

And then Jesus weeps, and I weep with him.

“What does my church tell you? Are you really trapped into supporting evil no matter how you vote?”

No; the church teaches that it is possible to vote for good reasons, even for a flawed candidate, while not intending to cooperate with other evils that candidate may support.

“So when you vote, since you are not trying to support evil, what are you really trying to do?

To choose, in the face of terrible options, the candidate who I think will accomplish more good and less evil during their time in office.

“And what will you do, after voting, about the evil that may come as a result?”

I will resist it, protest it and continue to work against it.

“Then are you supporting that evil?”

“Then do not believe those who lie to you and tell you that you are.”

Underneath all the necessary and complicated distinctions about degrees of moral cooperation, and beyond the debates about how the “pre-eminent priority” of abortion as an issue can be translated into a vote and how or whether other issues still count alongside it, this is what the church needs to teach and preach clearly: that a vote is a moral act and a vitally important one, but not a test of faith to be solved as a doctrinal puzzle to which there is only ever one answer.

Sadly, there are plenty of people, claiming to speak on behalf of the church, who have decided to appeal to fear rather than to freedom in this election season.

Your vote must be cast in good conscience, informed by the church’s teaching and your own knowledge of the country, candidates and issues involved. Like any moral act, it must be judged both in terms of its objective effects, so far as they can be predicted and known, and also by the moral intentions of the one who acts.

Sadly, there are plenty of people, claiming to speak on behalf of the church, who have decided to appeal to fear rather than to freedom in this election season. That choice probably tells us more about them and their own goals and fears than it does about what God wants from us in the voting booth.

Instead of listening to them, let’s listen to Jesus saying, “Be not afraid.” And then let’s vote in freedom rather than from fear.

More Election Stories from America
– Bishop Seitz: Single-issue voting has corrupted Christian political witness
– Jeannie Gaffigan: My loved ones told me ‘real’ Catholics vote for Trump. Here’s my response.
– The Top 3 Reasons that Catholics will Vote for Trump or Biden
– Do Catholics have to vote for Trump? Three points to consider.