U.S. Bishops’ working group on Biden wraps up with plans to issue document on ‘eucharistic coherence’ 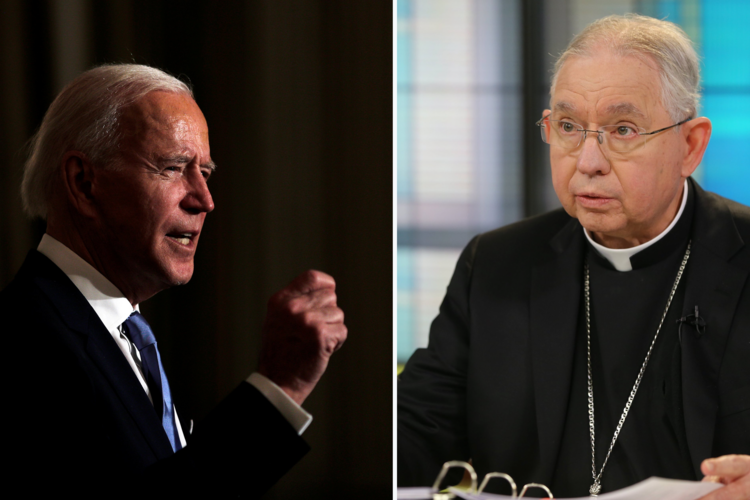 WASHINGTON (CNS) -- A special working group of the U.S. bishops formed last November to deal with conflicts that could arise between the policies of President Joe Biden, a Catholic, and church teaching has completed its work, Los Angeles Archbishop José H. Gomez said in a March 1 memo to all the U.S. bishops.

Catholic News Service obtained a copy of the memo issued by Archbishop Gomez, president of the U.S. Conference of Catholic Bishops, as a follow-up to a February memo he sent to the bishops explaining the working group’s two recommendations given to him in its final report.

The March 1 memo confirms the actions taken on them.

The first of two recommendations made by the working group, he said, was to write a letter to Biden “conveying the USCCB’s eagerness to work with him on issues where we will undoubtedly express strong support, while acknowledging a lack of support on other issues where we cannot agree with anticipated policies.”

The second recommendation was to develop “a document addressed to all of the Catholic faithful on eucharistic coherence,” the archbishop said.

Archbishop Gomez issued the Biden letter Jan. 20, which was Inauguration Day and Biden was sworn in as the nation’s 46th president. “I look forward to working with President Biden and his administration, and the new Congress,” the archbishop said. “As with every administration, there will be areas where we agree and work closely together and areas where we will have principled disagreement and strong opposition,” he said.

The archbishop said that the bishops hold deep concerns about “many threats to human life and dignity in our society,” including euthanasia, the death penalty, immigration policy, racism, poverty, care for the environment, criminal justice reform, economic development and international peace.

He also expressed hope the incoming administration “will work with the church and others of goodwill” to “address the complicated cultural and economic factors that are driving abortion and discouraging families.”

For the U.S. bishops, the “continued injustice of abortion” remains the “preeminent priority,” Archbishop Gomez said, but “‘preeminent’ does not mean ‘only.’ We have deep concerns about many threats to human life and dignity in our society.”

As for developing a document on “eucharistic coherence,” as Archbishop Gomez called it, he said this recommendation has been “forwarded to the Committee on Doctrine in the hope that it will strengthen an understanding and deepen a common faith in the gift that has been given to us in the Sacrament of the Altar.”

The “continued injustice of abortion” remains the “preeminent priority,” Archbishop Gomez said, but “‘preeminent’ does not mean ‘only.’”

The reference to “eucharistic coherence” may reflect a growing concern among the bishops regarding Catholic understanding and practice regarding the sacrament.

While there has been fierce debate in some circles, including among bishops, over the reception of the Eucharist when one is not in accord with church teachings, there also is a deep concern about polling that suggests a confusion or lack of understanding about the Real Presence in Catholic belief and practice.

Archbishop Gomez announced the establishment of this special working group at the end of the public portion of the U.S. bishops’ fall general assembly Nov. 16-17, which was held completely online because of the pandemic.

He named Archbishop Allen H. Vigneron of Detroit, USCCB vice president, to head up the group to address issues surrounding the election of a Catholic president and policies that may come about that would be in conflict with Catholic teaching and the bishops’ priorities.

Polling suggests a confusion or lack of understanding about the Real Presence in Catholic belief and practice.

Other members were the chairmen of USCCB committees focused on various policy areas.

“We are facing a unique moment in the history of our country” with the election of Biden, only the second Catholic to become president, Archbishop Gomez said in announcing the group. “This presents certain opportunities but also certain challenges.”

Xavier Becerra, Biden’s HHS pick, is ‘an enemy of the health of women and the unborn,’ pro-life leaders say
J.D. Long-García

Biden has indicated his faith commitments “will lead to certain policies that we favor,” Archbishop Gomez said, such as immigration, aid to refugees and the poor, racial justice and climate change, but he supports Roe v. Wade and has said he favors repeal of the Hyde Amendment.

Hyde, reenacted every year for 45 years, outlaws federal tax dollars from directly funding abortion except in cases of rape, incest or when the life of the woman would be endangered.