U.S. bishops express concern over a having a Catholic president who is pro-choice 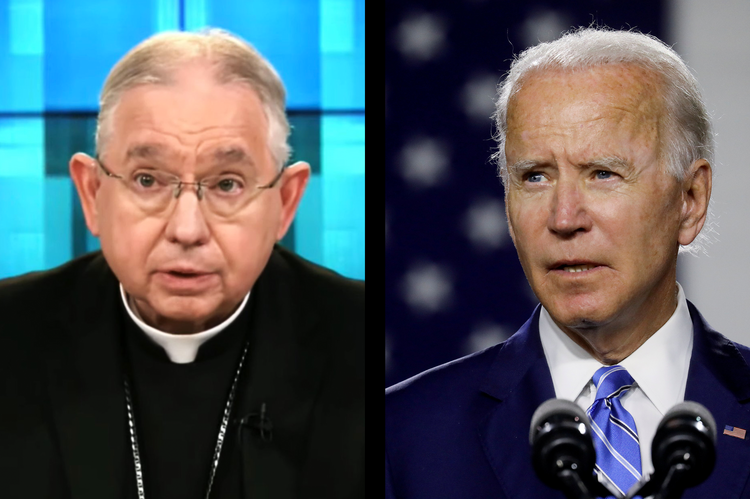 Los Angeles Archbishop José H. Gomez, president of the U.S. Conference of Catholic Bishops, announces Nov. 17, 2020, he is forming a committee to look at various policy issues with regard to the incoming administration of President-elect Joe Biden. (CNS photo/Screen Grab)

A majority of U.S. Catholics may have voted for Joseph R. Biden Jr. in the recent election, but U.S. bishops expressed some concern about how the nation’s second Catholic president may govern. Archbishop José Gomez, the president of the U.S. Conference of Catholic Bishops said that the election of Mr. Biden, who speaks regularly about his Catholic faith, “presents certain opportunities but also certain challenges.”

At its fall gathering this week, the U.S. bishops announced the creation of a special “working group” of bishops to address what its leader called the “difficult and complex situation” they see in Mr. Biden’s election.

“We are facing a unique moment in the history of the church in this country,” said Archbishop Gomez. “For only the second time, we are anticipating a transition to a president who professes the Catholic faith.”

Four years ago, the election of Donald J. Trump seemed to dominate much of the bishops’ fall meeting. Some bishops sought to comfort people alarmed by Mr. Trump’s anti-immigration rhetoric while others announced they had congratulated the then-president-elect and looked forward to finding common ground.

The U.S. Conference of Catholic Bishops announced the creation of a special “working group” of bishops to address what its leader called the “difficult and complex situation” they see in Mr. Biden’s election.

During the Trump presidency, many Catholic leaders condemned the president’s policies related to immigration and climate change, among other issues, but several church leaders also praised Mr. Trump for appointing conservative judges, supporting federal aid for Catholic schools and siding with religious conservatives when it comes to religious liberty legal proceedings. After the president’s loss earlier this month, it seemed likely that bishops would devote time to the election during their meeting this week, which was relegated to Zoom because of the ongoing pandemic.

But talk of this month’s election was nearly absent.

Instead, bishops focused on the recently released report about the disgraced former cardinal Theodore McCarrick, their response to the Covid-19 pandemic and the church’s work to fight racism.

But in the final few minutes before the meeting’s conclusion, Archbishop Gomez said that several other bishops had approached him “to express a particular concern in the wake of the election.”

Archbishop Gomez said that the election of Mr. Biden, who speaks regularly about his Catholic faith, “presents certain opportunities but also certain challenges.”

On the positive side, Archbishop Gomez said: “The president-elect gives us reason to believe that his faith commitments will move him to support some good policies. This includes policies in favor of immigration reform, refugees and the poor, and against racism, the death penalty and climate change.”

Indeed, Mr. Biden said last week that he plans to increase the number of refugees resettled in the United States from historic lows imposed by the Trump administration. And the president-elect said he hopes to rejoin the Paris climate agreement and implement immigration reform. Mr. Biden’s campaign announced that the former vice president has already spoken to Pope Francis about possibilities for collaboration of shared goals.

Still, Archbishop Gomez said that Mr. Biden also supports policies “that are against the fundamental values we hold dear as Catholics,” citing the former vice president’s stance in favor of L.G.B.T. rights and his support for access to abortion and contraception.

Mr. Biden’s campaign announced that the former vice president has already spoken to Pope Francis about possibilities for collaboration of shared goals.

“These policies pose a serious threat to the common good, whenever any politician supports them,” Archbishop Gomez said.

“When politicians who profess the Catholic faith support them, there are additional problems,” he said, adding that support from Catholic politicians “creates confusion with the faithful about what the church actually teaches on these questions.”

In the weeks leading up to the election, some bishops suggested that Catholics should not vote for Mr. Biden because of his stance on abortion. And even after widespread recognition that Mr. Biden won the election, some church leaders have suggested the election results are still questionable. Earlier this month, Archbishop Gomez released a statement calling for national unity and offered reserved congratulations to Mr. Biden and Vice President-elect Kamala Harris. Archbishop Gomez said that the creation of the working group was similar to a decision made by leaders of the U.S.C.C.B. in 2016 following Mr. Trump’s election. “Then as now, committees already existed to address those issues, and the goal was to emphasize our priorities and enhance collaboration,” he said.

– The U.S. Bishops should find ways to collaborate with Joe Biden (and not alienate him)
– Joe Biden thanked Pope Francis for ‘extending blessings and congratulations’ this morning
– Analysis: Catholic bishops reprimand Trump as often as they praise him