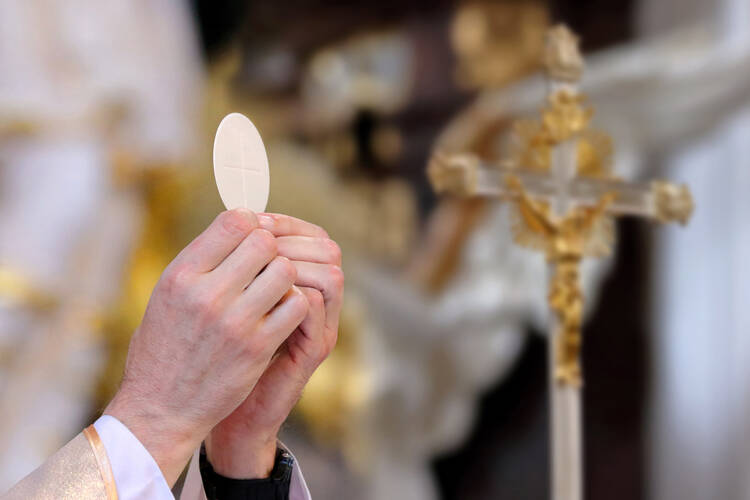 Cardinal Luis F. Ladaria, S.J., the prefect of the Congregation for the Doctrine of the Faith, has sent a letter to Archbishop José H. Gomez, the president of the U.S. Conference of Catholic Bishops, that may lead to a reconsideration of the plan of some bishops to get the conference to approve a document regarding “the worthiness to receive Communion” of Catholic politicians who support legislation permitting abortion, euthanasia or other moral evils.

The letter, dated May 7, comes as a response to a letter on March 30 from Archbishop Gomez to the C.D.F. in which he informed the congregation that the U.S.C.C.B. was preparing to draft such a document.

Cardinal Ladaria thanked the archbishop for this information and for assuring him that the U.S.C.C.B. plans to send the draft text to the C.D.F. “for an informal review, prior to its submission to the body of bishops for a vote.” He concluded by saying the C.D.F. asks that the cardinal’s letter “be shared with all the bishops of the United States.”

Cardinal Luis F. Ladaria, S.J., has sent a letter to Archbishop José H. Gomez that may lead to a reconsideration of the plan of some bishops to get the conference to approve a document regarding “the worthiness to receive Communion” of Catholic politicians.

Cardinal Ladaria begins the letter by responding at length to Archbishop Gomez’s request that the C.D.F. make available a copy of a letter from then Cardinal Joseph Ratzinger to former cardinal Theodore McCarrick in 2004 on the subject. Cardinal Ladaria explained that since it was “in the form of a private letter to the bishops” and Cardinal Ratzinger had stipulated that “these principles were not intended for publication,” the C.D.F. would respect his wish.

At the same time, Cardinal Ladaria acknowledged that the principles contained in the letter may assist the bishops in drafting their document, but they “should only be discussed within the context of the [C.D.F.’s] authoritative doctrinal note” of 2002: “On some questions regarding the participation of Catholics in political life.” He said that text predates Cardinal Ratzinger’s “personal communication” and “provides the teaching of the Magisterium on the theological foundation for any initiative regarding the question of the worthy reception of Holy Communion.”

In the letter from Cardinal Ladaria, a copy of which was seen by America, he recalls that the issue of a U.S.C.C.B. document on Catholic pro-choice politicians and worthiness for reception of Communion, had been raised during the 2019-20 ad limina visits of the U.S. bishops to Pope Francis. He said the C.D.F. had then “advised that dialogue among the bishops be undertaken to preserve the unity of the episcopal conference in the face of disagreements over this controversial topic.”

“The congregation notes that such a policy, given its possibly contentious nature, could have the opposite effect and become a source of discord rather than unity within the episcopate and the larger church in the United States.”

Furthermore, the cardinal said, “the formulation of a national policy was suggested during the ad limina visits only if this would help the bishops to maintain unity.” He added, “The congregation notes that such a policy, given its possibly contentious nature, could have the opposite effect and become a source of discord rather than unity within the episcopate and the larger church in the United States.”

Cardinal Ladaria said the C.D.F. had then advised the U.S. bishops to take certain important steps before drafting any document, including engaging in “extensive and serene dialogue” in two stages. It said such dialogue should take place first among the bishops with the aim of reaching agreement on the doctrinal issues so as “to maintain unity” in the conference and in the church in the United States.

After doing that, it said the bishops should conduct a similar dialogue with the Catholic politicians “within their jurisdiction who adopt a pro-choice position regarding abortion legislation, euthanasia, or other moral evils, as a means of understanding the nature of their positions and their comprehension of Catholic teaching.”

“Any statement of the conference regarding Catholic political leaders would best be framed within the broad context of worthiness for the reception of Holy Communion on the part of all the faithful, rather than only one category of Catholics.”

Once these two stages of dialogue have been completed, Cardinal Ladaria said the bishops’ conference “would then face the difficult task of discerning the best way forward for the church in the United States to witness to the grave moral responsibility of Catholic public officials to protect human life at all stages.”

The C.D.F. letter also lays down important markers if the bishops choose to go in this direction. First, it said that if the conference decides “to formulate a national policy on worthiness for Communion,” that “such a statement would need to express a true consensus of the bishops on the matter, while observing the prerequisite that any provision of the conference in this area would respect the rights of individual ordinaries in their dioceses and the prerogatives of the Holy See.”

Cardinal Ladaria said the C.D.F. “advises” the U.S.C.C.B. that “any statement of the conference regarding Catholic political leaders would best be framed within the broad context of worthiness for the reception of Holy Communion on the part of all the faithful, rather than only one category of Catholics, reflecting their obligation to conform their lives to the entire Gospel of Jesus Christ as they prepare to receive the sacrament.”

Significantly, in a comment that challenges the U.S.C.C.B. position that abortion is “the pre-eminent” moral issue, Cardinal Ladaria told the conference’s president that “it would be misleading if such a statement were to give the impression that abortion and euthanasia alone constitute the only grave matters of Catholic moral and social teaching that demand the fullest accountability on the part of Catholics.”

Cardinal Ladaria concluded by telling Archbishop Gomez that as they draft the statement the U.S. bishops should make “every effort...to dialogue with other episcopal conferences [in other countries] as this policy is formulated in order both to learn from one another and to preserve unity in the Universal Church.”