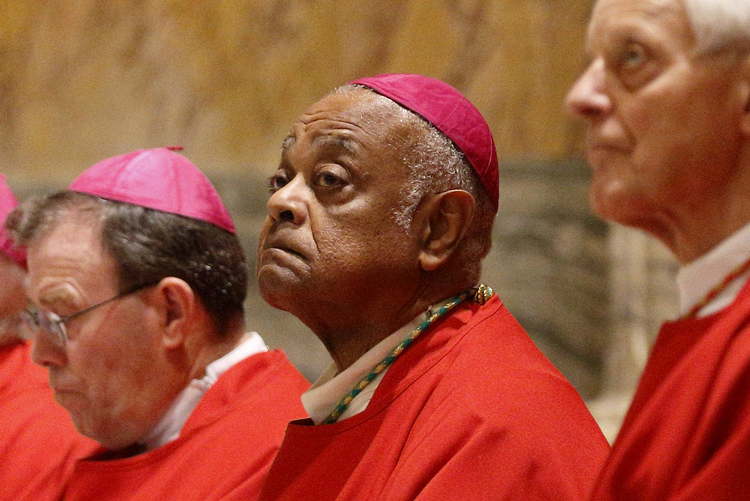 Archbishop Wilton D. Gregory of Washington, center, is pictured with other U.S. bishops during a Mass at the Basilica of St. Paul Outside the Walls in Rome in this Dec. 3, 2019, file photo. In a Zoom interview from the Domus Sanctae Marthae, where he is in quarantine before the Nov. 28 consistory, Cardinal-designate Gregory talked about the importance of dialogue for the church and for the United States. (CNS photo/Carol Glatz)

VATICAN CITY (CNS) — As Washington’s new cardinal and with a Catholic soon to be living in the White House, Cardinal-designate Wilton D. Gregory said he hopes to collaborate where possible while respectfully pointing out where President-elect Joe Biden’s policies diverge from Catholic teaching.

In a Zoom interview Nov. 24 from the Vatican’s Domus Sanctae Marthae, where he is in quarantine for 10 days as a COVID-19 precaution, the cardinal-designate said he would not prevent the new president, who goes to Mass every Sunday, from receiving Communion in the archdiocese.

In deciding when to collaborate and when to criticize, he said, “I hope that I don’t highlight one over the other.”

“I hope it’s a real dialogue, because I think that’s the mantra of Pope Francis — that we should be a church in dialogue, even with those with whom we have some serious disagreements,” he said.

The archbishop of Washington said “informed Catholics” know the church’s teaching on the sacredness of human life from conception to natural death, so he does not believe they would be confused by the church cooperating with a Biden administration on other issues.

We should be a church in dialogue, even with those with whom we have some serious disagreements, Archbishop Gregory said.

“It’s not a matter of confusion,” he said. “On my part, it’s a matter of the responsibility that I have as the archbishop to be engaged and to be in dialogue with him, even in those areas where we obviously have some differences.”

While some Catholics believing Biden should not be allowed to receive Communion when he goes to Mass, Cardinal-designate Gregory said that for eight years as vice president, Biden went to Mass and received Communion.

The cardinal-designate said there also is a need for dialogue within the church among people who think differently.

“Conflict within the church is not a new reality; it goes back to apostolic times,” he said. “What seems to be new is the capacity for people to broadcast the conflicts and to allow social communications to intensify the conflict.”

Ordained to the priesthood in 1973 for the Archdiocese of Chicago, Cardinal-designate Gregory spoke about the late Chicago Cardinal Joseph L. Bernardin’s efforts to promote a way for Catholics to find “common ground” and reaffirm communion among them.

One key, he said, is developing “the capacity to have civil disagreements — serious disagreements, you know, really pointed disagreements — but done in such a way that the focus is on the argument, not on the demonization of the people with whom we disagree.”

The first African-American cardinal is a tribute to the faith of Black Catholics—and a gift to the entire church
Bryan N. Massingale

Although he is staying in the pope’s residence, Cardinal-designate Gregory has not seen the pope since he arrived in Rome. The quarantine to prevent the spread of the coronavirus is serious. Meals, fresh linens and clean laundry are left outside his door.

“I’ve had a lot of time to do some prayerful reflection, some thoughtful moments in prayer,” he said. But he also has been using the time to calmly write letters that “ordinarily, I would do rather quickly.”

As the first African American cardinal, he said he thinks Pope Francis’ choosing him is a sign that “the Catholic Church says we have to be more inclusive, to be more engaging with people of different backgrounds and races and ethnic traditions.”

For more than 60 years, going back to St. John XXIII, the popes have been sending that signal by expanding the College of Cardinals, “and Pope Francis has, of course, put that in hyperspeed, because he’s now appointed cardinals from countries that have never had a cardinal.”