The Editors: Abortion is the real reason the Supreme Court is broken. 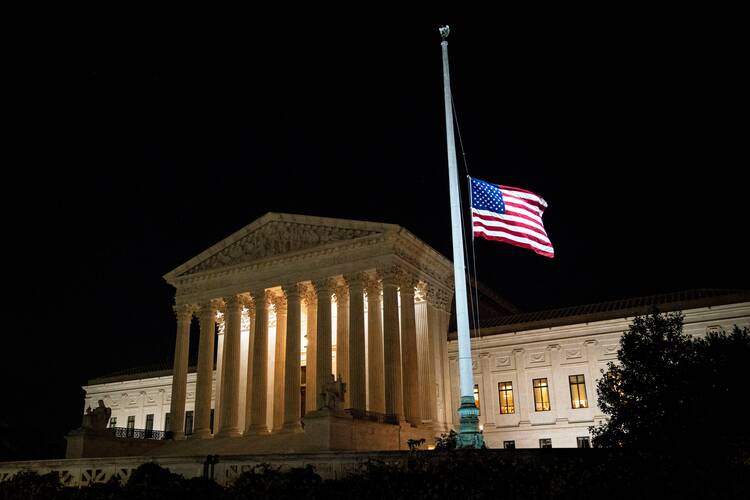 The American flag flies at half staff following the death of U.S. Supreme Court Justice Ruth Bader Ginsburg outside of the U.S. Supreme Court in Washington Sept. 18, 2020. Ginsburg died due to complications of metastatic pancreas cancer. She was 87. (CNS photo/Al Drago, Reuters)

This week, as much of the country mourned the death of Justice Ruth Bader Ginsburg, President Trump promised to nominate her replacement promptly. (His pick is expected to be announced tomorrow.) Senator Mitch McConnell, the Republican majority leader who refused for nine months to consider President Barack Obama’s nominee after Justice Antonin Scalia’s death in 2016, has promised a floor vote on this nomination by the end of the year.

This nomination battle will be as contentious as any in history because it is the final payoff of the gamble large parts of the pro-life movement made in supporting Mr. Trump. It is yet more proof that Americans’ deep moral divisions over abortion cannot be addressed under the shadow cast by Roe v. Wade.

This nomination battle will be as contentious as any in history because it is the final payoff of the gamble large parts of the pro-life movement made in supporting Mr. Trump.

Last week, the editors of America warned that Mr. Trump’s disdain for both implicit norms and explicit rules represents a unique danger to the constitutional order, as it subverts the very conditions necessary “for debate, decision-making and public accountability in this republic,” replacing them instead with a purely transactional politics of self-interest and advantage. The rush to push through a nominee on a party-line vote before the election—in the same week when Mr. Trump has twice refused to affirm that he would abide by the conventions that guarantee a peaceful transfer of power after a national election—further underlines this thesis.

Even though this nomination's outcome is not in much doubt, the way the fight is developing shows how deep this erosion of respect for constitutional order goes. Mr. Trump’s presidency is a constitutional threat not because he is the sole cause of this erosion but because he is uniquely eager and indiscriminate in the way he exploits it, and because the Republican Party has proven itself unwilling to put any brakes on his efforts to do so, while their Democratic counterparts’ appeal to respect for norms can seem just as self-interested, though far less effective.

Rather than being clearly the fault of one party, the hypocrisy on display in fights over nominations to the Supreme Court is like a series of nesting dolls. It is about Mr. McConnell’s transparent abandonment of the principle he invented when he refused to consider Mr. Obama’s nomination of Merrick Garland. But that invention was a response to the then-unique stakes, now being repeated, of replacing a justice who would tip the ideological balance of the court. Going further back, the Democrats’ “nuclear option” to eliminate the filibuster for judicial nominations can be blamed, but that break with precedent itself responded to Republicans’ dedicated obstruction of a large number of Mr. Obama’s nominees across two terms. And the conversation does not need to go on for very long before the argument turns to Democratic senators’ opposition, led by Joe Biden, to the nomination of Robert Bork in 1987.

What all of these concentric accusations of hypocrisy have in common is that they are largely, if not entirely, about abortion and support for or opposition to Roe v. Wade. Of course, many other important issues come before the court, but its resolutions of other epochal constitutional issues—from rejecting racial segregation to requiring the recognition of same-sex marriage—have helped usher in widespread societal acceptance of major changes. On the other hand, Roe v. Wade ignited a debate that has dominated American politics and deranged the process of Supreme Court appointments for more than 40 years.

What all of these concentric accusations of hypocrisy have in common is that they are largely, if not entirely, about abortion and support for or opposition to Roe v. Wade.

The reason this editorial can be published even before Mr. Trump has made his nomination is that the one thing certain about the eventual nominee is that she will likely be a well-qualified jurist and also, as much as anyone can be certain, a reliable vote to oppose and overturn Roe v. Wade. (She will also, in the tradition of nominees during confirmation hearings since Mr. Bork, profess a formal adherence to settled precedent regarding Roe v. Wade that will neither satisfy those who want it preserved nor concern those who want it overturned.)

Depending on who is nominated and what schedule Senate Republicans adopt, the next weeks may be dominated by arguments over the nominee’s religious views or position on voting rights or proposals for court-packing. What these debates will have in common is that they will be largely beside the point. The fact remains that a critical moral issue about which Americans profoundly disagree has been reserved to the court, which has proven unable to find any resolution. The Supreme Court nomination process, therefore, has become an exercise in abortion policy by other means, a task for which the court is uniquely ill-suited.

Much of the pro-life movement has committed itself to a decades-long partnership with the Republican Party designed to reach this exact moment, where the court can be decisively tipped and Roe v. Wade at least hollowed out, if not overruled. Insofar as Roe has always been bad law and has utterly failed to settle the abortion debate, removing it as an obstacle and returning decisions regarding the legality of abortion to the states and to voters is a result to be welcomed.

But the costs of that strategic alliance, itself a consequence of the court’s failure in Roe, will be felt for years if not decades to come. The pitched battle for the court has also incentivized political parties to pursue policy changes through the courts rather than legislation on a range of issues, furthering the dysfunction of Congress, as seen in the endless court battles over the Affordable Care Act.

This same dynamic has tended to increase the power of the executive branch, a kind of free-rider effect of the ideological filters applied to select judges ready to overturn Roe. Culturally, the willingness of some Christians to support the Republican Party at any cost in order to win pro-life victories at the court has subjected even basic evangelization to partisan division, at a significant cost to the credibility of Christian witness. When and if Roe is overturned, these obstacles will be more keenly felt in subsequent efforts to pass pro-life legislation at the state level.

Given the manifest failure of Roe and the ongoing reduction of U.S. politics to transactional advantage, perhaps the best that can be hoped for at this juncture is a relatively calm party-line confirmation of a nominee over understandable and justifiable protest from those who have lost in this round of Supreme Court nomination roulette. The eventual removal of Roe as an obstacle to legislative action on abortion may also be a necessary—though by no means sufficient—condition if the country is ever going to be able to walk away from the roulette table. If so, that will be something to be grateful for, though Americans will be paying off that gambling debt for decades to come.