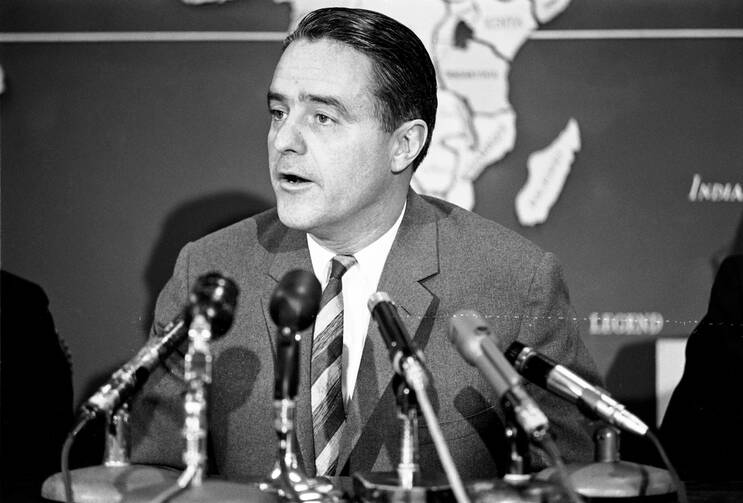 Daniel Patrick Moynihan, Michael Harrington and Tom Hayden were all prominent domestic-policy players during the chaotic decade between the assassination of John F. Kennedy and Watergate. But the Catholic who arguably cast the longest shadow in Shlaes’s account is Sargent Shriver—Lyndon Johnson’s point man on poverty, who, in the words of the biographer Scott Stossel, “may have positively affected more people around the world than any 20th century American who was not a…major elected official or Martin Luther King.”

In Spiritualizing Politics Without Politicizing Religion, a compelling, substantive new book, James R. Price and Kenneth R. Melchin argue that we need Shriver’s “Catholic streak” now more than ever to break through what they call the “fog of the contemporary culture wars” and serve as “a stark contrast to the contemporary political realism associated with Thomas Hobbes.”

Price is the executive director of the Sargent Shriver Peace Institute, while Melchin directs a center at St. Paul University, in Ottawa, dedicated to the influential, multidisciplinary work of the Canadian theologian Bernard Lonergan, S.J. The authors have been thinking about a book along these lines—Lonergan’s “insight” theory meets Shriverian policy and pragmatism, meets the 21st century—for nearly two decades. During that time, Shriver (husband to Eunice Kennedy, and brother-in-law to J.F.K. and Robert F. Kennedy) died at the age of 95, in 2011, the same year Stossel released his mammoth authorized biography of him.

Price and Melchin start with one of Shriver’s “most compelling ideas…that politics actually needs religion to do its work.”

Price and Melchin start with one of Shriver’s “most compelling ideas…that politics actually needs religion to do its work.” The authors are judicious in assigning blame for the cultural “mess we’re in,” citing “the imperious proliferation of doctrinaire religious conviction” as well as the “growing secularism of the academy and the public square.” Shriver, the authors contend, admirably “bridged the worlds of religion and politics,” a fusion that informed ambitious government projects like the Peace Corps.

“Break your mirrors!” Shriver declared at an address at Yale in May 1994. “Shatter the glass. In our society that is so self-absorbed, begin to look less at yourself and more at each other.” Even today’s most committed partisans would agree that the need for such a shift has only become more urgent.

Price and Melchin present Shriver as an exemplary consensus-builder, who “lived core values from both sides of the conservative-liberal divide.” Whether or not these opposing “sides” can—or even want to—work with each other in 2023 is a far more complex, contentious question.

Shriver was born in Maryland in 1915, the youngest of two boys raised by devout parents. It was an era infused by the social justice encyclicals “Rerum Novarum” (1891) and “Quadragesimo Anno” (1931), both of which “played an important role in Shriver’s early public life,” the authors note, adding that “one of [Shriver’s] favourite authors” was the French theologian Jacques Maritain.

By the late 1920s, Shriver’s parents had moved to New York City and become active in circles around the newly founded Commonweal magazine, which “advocated the separation of church and state but respected the role of religion in politics.” A series of court rulings would soon exacerbate already-extensive cultural confusion surrounding the infamous American “wall of separation” between religion and government. The authors cite these rulings as crucial to understanding Shriver’s ideas and career—though it must be added that additional context would be helpful, especially about the degree to which Catholicism inspired anxiety and suspicion as Shriver came of age, from Al Smith’s doomed 1920s presidential campaigns to Eleanor Roosevelt’s public spats with Cardinal Francis Spellman.

Ultimately, the authors position Shriver as an exemplar of a Catholic tradition that “reminds us to remain wary of the fanaticisms that arise when we seek perfection in this world, through the pursuit of technology, wealth, military might, or even liberty.” Since, according to Price and Melchin, “human life is not perfectible by politics,” and “legitimate influences can and must flow from religion to politics,” Shriver’s career is presented as an example of Lonergan’s “insight theory” in action—“a recognition of openness and diversity that discovers a common humanity and spiritual dynamism in the interior life of all citizens.”

In other words, the more we reflect upon, so as to better understand, our own hearts and minds, the more insight we’ll attain into those of others. “Through these operations we move out of ourselves into an engagement with the world,” the authors write, assisting our efforts to distinguish “between development and its opposite, decline.”

One can quibble with the occasional vague or awkward phrase in this book—such as “insight into interiority”—though not the ambition of the larger goal: to locate “a whole new way of retrieving and transposing core insights from Catholic tradition on natural law and charity.”

This is most vividly illustrated by the Peace Corps, proposed by J.F.K. as a kind of afterthought on the 1960 campaign trail and brought to vibrant life by the sweat of Shriver’s brow. “[N]othing like it had ever been tried by the U.S. government,” the authors write, crediting Shriver for applying core principles from his Catholic faith in his work to establish the Peace Corps. Shriver himself believed people from all walks of life could “meet with other men and women on the common ground of service to human welfare and human dignity.” To Price and Melchin, Peace Corps workers were not mere saleswomen or salesmen. They would:

Similarly ambitious initiatives followed, many conceptualized or steered (or both) by Shriver—Head Start, Job Corps, Volunteers in Service to America (Vista), the National Center on Poverty Law, the Special Olympics. The good intentions and vast potential benefits of these programs are obvious enough. By 2023, however, so are many of the unintended consequences. Some of these have been targeted for decades by budget-conscious right-wingers. But an entire generation of progressive activists also now recoil at the very possibility that representatives from more powerful cultures can charitably, or neutrally, serve those with far less social capital.

Price and Melchin convincingly offer up Shriver as one of the “great peacemakers of our age.” Now we just need to figure out what kind of peace—if any—is fitting for our age.

For what it’s worth, Shriver also inspired skepticism over 50 years ago. To the charge that his initiatives were pie-in-the-sky dreams, and “fl[ew] in the face of the so-called ‘realism’ of power politics,” Price and Melchin argue that Shriver’s approach actually, and ably, reflects the necessities of “hardhead pragmatism and realistic administration.” The authors themselves are optimistic that a reconsideration of Sargent Shriver can translate Lonerganian ideas into tangible social results, “a transformative experience that shifts parties from certainty to curiosity, and from fear and aggression to openness and engagement.”

Shriver himself once said, “Politics is only as good as the hearts of its citizens.” Price and Melchin ultimately make as persuasive a case as can be made for these ideas, at least at a time when one loud faction of citizens who proudly politicize religion divides the poor into camps of barely deserving and undeserving, and prioritizes capitalist profits over Christian prophets.

Remembering the Wise Words of a Good Man
Joseph McAuley

Meanwhile, another loud and chic bunch divides the world between the all-powerful and utterly powerless. This bunch is nearly as skeptical of anything religious as they are of the very governments they nevertheless believe should be providing not just opportunities but guarantees.

Amid all this, Price and Melchin could not have foreseen the explosive religious battles that were part of the post-Dobbs scorched-earth war over the high court and Roe v. Wade. But they also never really address broader related issues, like the precipitous decline of the church’s moral standing, which would certainly influence any serious consideration of some key ideas. Then again, they don’t really take into account the church’s tenuous social position—over the decades and centuries—as a communitarian institution, in an American culture that has made a pseudo-religion of individualism. All of this is further complicated by the fact that such conflicts—ironically enough—transcend conventional liberal-conservative solutions.

Price and Melchin convincingly offer up Shriver as one of the “great peacemakers of our age.” Now we just need to figure out what kind of peace—if any—is fitting for our age.

This article also appeared in print, under the headline “Break Your Mirrors!,” in the February 2023, issue.

Tom Deignan has written about books for The New York Times, The Washington Post and The National Catholic Reporter. He is working on a book about Ellis Island. 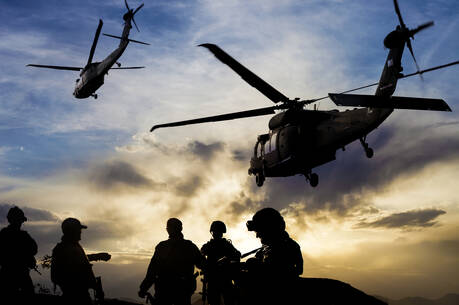 Review: Facing war up close
Ben Kesling’s 'Bravo Company' tells the story of a U.S. Army infantry company before, during and after a difficult deployment to Afghanistan in 2009.
Sean HagertyJanuary 19, 2023