When the (books about) saints go marching in 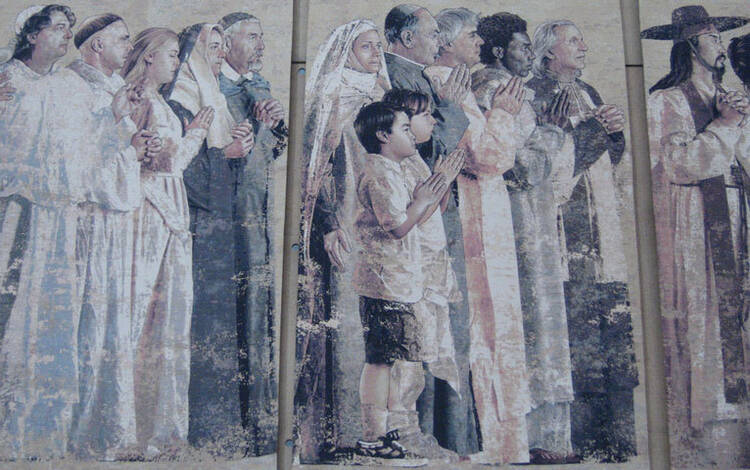 A portion of John Nava's tapestry of the communion of saints in the Cathedral of Our Lady of the Angels in Los Angeles (Wikimedia Commons/Adam A. Sofen)

Happy All Saints Day! While tomorrow, All Souls Day, is a bit more inclusive as far as memorials go, today’s feast is also an important one for anyone seeking to live a life of holiness—it turns our eyes toward the examples of sanctity in our contemporary milieus and in the history of the church. And we’ve all known a saint or two in our own lives, haven’t we? Even if not, the church gives us many examples of such, from apostles to martyrs to doctors to some real characters who might have seemed unlikely candidates once upon a time. There’s even a patron saint of writers, St. Francis de Book Sales.

Saints are “simultaneously exceptional and ordinary: ideals of holiness that awe us, inspire us toward deeper piety and convict us in our moral finitude."

Over the decades, America has always had time and space not only for this feast but for the cult of the saints in general. Our inaugural issue on April 17, 1909, featured a review of three books on St. Joan of Arc, including Mark Twain’s Personal Recollections of Joan of Arc. (The reviewer, Michael Kenny, S.J., insisted on calling him Samuel Clemens.) In more recent times, America editor at large James Martin, S.J., turned a 2005 reflection(“The Saint of the Sock Drawer”) into the starting point for The New York Times best-seller, My Life With The Saints.

Just in the past two weeks, America ran two stories on Peter Gumpel, S.J., who spent decades in Rome working on the causes of various candidates for sainthood: Kenneth L. Woodward’s “The final secret of the Vatican’s Jesuit saint maker” and Colleen Dulle and Gerard O’Connell’s “Inside the Vatican” podcast. Woodward’s 1990 book Making Saints: How The Catholic Church Determines Who Becomes A Saint, Who Doesn’t, And Why introduced many readers to the exhaustive and sometimes byzantine processes by which candidates for sainthood are put forward and promoted. In 2019, Kathleen Sprows Cummings showed in A Saint of Our Own how the causes of saints can sometimes be bound up with national and ethnic self-understandings.

In his review of the latter for America, Jack Downey noted that saints can be many things at once. They are “simultaneously exceptional and ordinary: ideals of holiness that awe us, inspire us toward deeper piety and convict us in our moral finitude. They are also thaumaturgical protectors who miraculously cure us of terminal illnesses, keep our loved ones safe during times of war and help us find stuff.” But at the same time, they “are also essentially mascots of particular causes, places and nations. And as such, they are also subject to ecclesiastical politics.”

In 2003, Lawrence Cunningham reviewed Robert Ellsberg’s The Saints’ Guide to Happiness for America, noting that Ellsberg had not turned to the saints to find “a smiley-face existence, or even Aristotle’s fullness of life derived from an intellectually and morally ordered way of being.” Rather, Cunningham wrote, “he has in mind that happiness rooted in the Beatitudes of Jesus, whose introductory word is more commonly translated today as blessed, rather than happy.”

Of course, as Cunningham notes, “the happiness promised in the Beatitudes often has an oxymoronic character in that, alongside peace and mercy, its litany of blessings includes words not normally associated with happiness—such as mourning and poverty.” Holiness, in other words, is no laughing matter. Nor, Ellsberg argues, is it “a code of conduct or a program to be followed, but a certain habit of being, a certain fullness of life.” However, Ellsberg also cites his mentor (and likely saint) Dorothy Day in arguing that happiness and holiness go together: “halfway to heaven is heaven.”

In 2014, Holly J. Grieco reviewed Robert Bartlett’s Why Can the Dead Do Such Great Things? for America. Bartlett stresses through myriad examples, Grieco notes, that “the interactions between the saints, living and dead, and the faithful” throughout much of Western Christian history have been dynamic ones: The faithful have attributed to their saints intercessions and grace-filled interventions; meanwhile, the saints (especially in their burial places) were venerated by the faithful who saw their presence as an integral element in their lives.

Because of this dynamic (a sort of sensus fidelium in miniature), many saints throughout history gained their status not through official proclamations, but through popular acclaim. Grieco notes that even though 12th- and 13th-century popes reserved for themselves the authority to declare someone a saint, still “in the later Middle Ages hundreds of men and women were still recognized as saints by public acclamation.”

This is a phenomenon we often associate with ancient legends (does St. Christopher still make the cut? St. Ursula? St. George and his dragon?), where there is little historical evidence for the existence of the person in question, but public acclamation is still a very real thing today. I was blessed to be present for both the 2015 beatification (in San Salvador) and the 2018 canonization (in Rome) of St. Óscar Romero; at the former, where Romero was declared “blessed,” there were flags, posters, prayer cards and t-shirts everywhere in San Salvador proleptically declaring him “San Romero.” Why wait for Rome? We all knew he was a saint.

Any look at the calendar of saints will show that it hasn’t always been the most inclusive list: There are a lot of Europeans, a lot of men, a lot of priests and bishops and popes and a lot of virgins and second-chance celibates, even counting those canonized under our saint-happy last three papacies. That seems to be changing a bit: Pope Francis has mentioned the church’s need for more women saints, and in 2007, America editor in chief Drew Christiansen, S.J., wrote of the need for more diverse models of holiness among our saints.

“So when we look to saints and martyrs today as models for ourselves, we should find not only men and women of virtue for us to emulate, but also flawed human beings, whose personal struggles to respond to God’s grace in their weakness led to the transformation of their characters,” Christiansen wrote. “For us these women and men are tests of our own willingness to be thoroughly converted. How we are conformed to Christ in our weakness is the test of holiness for us all.”

Many saints throughout history gained their status not through official proclamations, but through popular acclaim.

Our poetry selection for this week is “Because my hands are small compared to God’s,” by Jane Swart. Readers can view all of America’s published poems here.