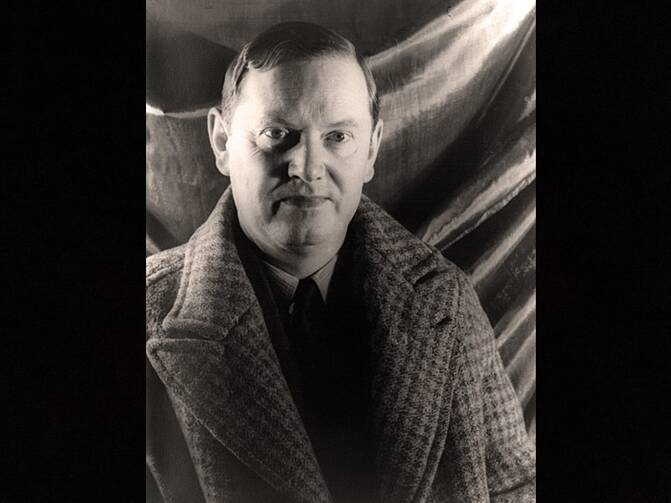 We have a running joke in the offices of America that there are certain figures whose every utterance or act requires coverage in the magazine. Whether it’s Bruce Springsteen, Dorothy Day, Flannery O’Connor or Thomas Merton, we can’t go more than a fortnight without mentioning at least one of them. Our poetry editor, Joseph Hoover, S.J., wrote a spoof about it for April Fool’s Day a few years back—and then about a week later, pitched a story about Bruce’s Catholic imagination.

Not until recently did I discover our forebears were no different; but their Bruce Springsteen was Evelyn Waugh. From the first mention in America in 1931 of “the brilliant young novelist” who had become Catholic the year before up until, well, I mentioned him in this space three weeks ago, the guy has never been far from the minds of America’s contributors.

From the first mention in 1931 of “the brilliant young novelist” who had become Catholic the year before, Evelyn Waugh has never been far from the minds of America’s contributors.

Soon after Waugh’s Brideshead Revisited was published in 1945, Harold C. Gardiner, S.J., America’s literary editor at the time, praised the novel as a “profoundly Catholic work” despite the importance of adultery, intellectual pride and debauchery to the plot. In the same issue, Gardiner also published a long essay assailing Waugh’s critics in the secular press. He returned to the theme a week later, then again a month later, and…you see the pattern.

It continues to this day, as many more authors—with frequent America contributors like Jon Sweeney, David Leigh and Joshua Hren among them—have offered their takes on the great novelist and satirist. One more dated but still pertinent article appeared in America on April 10, 1993, titled “Portrait of the Artist as a Christian Wayfarer.” Written by John W. Donohue, S.J., an associate editor of America from 1972 until 2007 (yes, you read those dates right), the article mentioned Waugh’s short stories, travelogues, essays and biographies, but focused largely on his 14 novels.

“Taken together,” Donohue wrote, “these novels amount to a work of such perfection that Graham Greene, in a memorial notice after Waugh’s death, called him ‘the greatest novelist of my generation.’”

1946; 1993; 2020: How can the same author be lauded across so many generations? Especially one who never won any bonus points for being nice, or even decent? As Joshua Hren noted in his 2020 essay for America, Waugh “had a proclivity toward cruelty,” to put it mildly. When asked by his friend Nancy Mitford how he could be so terrible toward others while also professing to be a Christian, Waugh replied that “were he not a Christian he would be even more horrible...and anyway would have committed suicide years ago.”

Graham Greene, in a memorial notice after Evelyn Waugh’s death, called him "the greatest novelist of my generation."

Waugh, born in 1903, arrived on the English literary scene at the age of 25, with his debut novel (after two nonfiction efforts), the satirical Rise and Fall, and became a commercial success with his second effort, Vile Bodies (1930). He had been educated at Oxford, though according to Waugh himself, his main interests at the time were carousing and naps. “I do no work here,” Donohue quotes Waugh in a letter to a friend, “and never go to Chapel.” In 1928, he was married to a woman also named Evelyn, leading friends to call them “Evelyn and She-velyn.” The marriage collapsed within a year, as She-velyn began a romance with one of Waugh’s friends, and it was annulled years later.

In 1930, Waugh became a Roman Catholic, writing to his friend (and longtime interlocutor) Martin D’Arcy, S.J., that he had realized “the Roman Catholic Church is the only genuine form of Christianity.” Waugh was a big enough name after Vile Bodies was published that his decision made headlines in the London papers. He later described his reception into the Catholic Church as “like stepping across the chimney piece out of a Looking-Glass world, where everything is an absurd caricature, into the real world God made; and then begins the delicious process of exploring it limitlessly.”

His novels from then on kept their satirical edge (so did Waugh), but also became more religious in theme; Waugh argued that his fellow Modernist fiction writers sought “to represent the whole human mind and soul and yet omit its determining character—that of being God’s creature.” He remarried in 1937, to Laura Herbert (she was a cousin of She-velyn; British aristocrats, amirite?), and they had seven children, one of whom died in infancy.

After service in the Second World War, Waugh settled into the life of a full-time writer. Though he traveled extensively, he never learned to drive and refused to use the telephone. His signature novel was Brideshead Revisited, whose commercial and critical success made Waugh financially secure and all the more famous, but he also gained a certain fame (and notoriety) in the United States for several visits to the United States and the scathing reports he delivered after. He had a special antipathy toward “the bloody Yanks,” whom he considered “barbaric, vulgar and bereft of tradition,” Joshua Hren noted in America.

In The Loved One, Waugh’s on-the-nose sendup of Southern California’s absurd funeral customs, the protagonist finds himself “exiled in the barbarous regions of the world.” The British protagonist finds one single positive trait among Americans: They “don’t expect you to listen.” Even better, “Nothing they say is designed to be heard.”

Evelyn Waugh was a big enough name after Vile Bodies that his decision to become Catholic made headlines in the London papers.

That anti-American streak was tempered over time; Waugh eventually wrote more positive pieces about the U.S. church and donated the profits from the paperback version of The Loved One to the U.S. bishops. “We also forget how he mentored a young Thomas Merton in the late 1940s as the sage editor for the British editions of two of the young Trappist’s books, including The Seven Storey Mountain, which was retitled Elected Silence in England,” Jon Sweeney wrote in America in 2013. Waugh even wrote in a letter to a friend at the time: “It seems to me likely that American monasticism may help save the world.”

In 2017, David Leigh reviewed Philip Eade’s biography of Waugh for America. He noted that Waugh’s later years were troubled by depression and family strife (Waugh once said, “I am very contentedly married. I have numerous children whom I see once a day for 10, I hope, awe-inspiring minutes.”). A heavy drinker, Waugh had also become dependent on sedatives to sleep. During a 1954 trip to Ceylon, he suffered what appeared to be a nervous breakdown (likely brought on by his drug use), an experience later fictionalized in the novel The Ordeal of Gordon Pinfield.

Another unhappy development for Waugh was the Second Vatican Council, as he decried the changes the council wrought in the Catholic Church. Before the council was even long underway, Waugh had penned open letters in 1963 to the gathered bishops (published in The National Review and The London Spectator) lamenting the anticipated renewal in the church; he was particularly appalled by the notion of a “priesthood of the laity” the council promulgated. His experience of the post-conciliar church was also not a happy one: Not long before his death in 1966, he wrote, “I have not yet soaked myself in petrol and gone up in flames, but I now cling to the Faith doggedly without joy.”

He died on April 10, 1966, a few hours after Easter Sunday Mass. A decade previous, he had written the following to the poet Elizabeth Sitwell, his goddaughter, on the occasion of her reception into the Catholic Church: “I always think to myself, ‘I know I am awful. But how much more awful I should be without the Faith.’ One of the joys of Catholic life is to recognize the little sparks of good everywhere, as well as the fire of the saints.”

"I know I am awful. But how much more awful I should be without the Faith."

Our poetry selection for this week is “In Copenhagen,” by Lisa Mullenneaux. Readers can view all of America’s published poems here.