Waugh's Head Revisited: A writer who deserves to be remembered 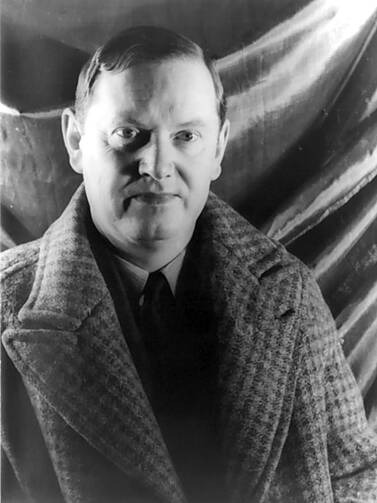 Evelyn Waugh (1903-66) published 14 novels between 1928 and 1961. Another went unpublished and is counted among his juvenilia, and yet another was released only in a limited edition of several hundred copies. Of the 14, several were widely acclaimed bestsellers in their day, including Brideshead Revisited (1945), Scoop (1938) and A Handful of Dust (1934). He also wrote three volumes of biography (on Rossetti, Campion and Knox, all lesser figures today), eight mostly forgettable books of travel writing even by Waugh’s estimation, one volume of memoir (A Little Learning), short stories, diaries and letters and various essays and journalism, much of it written originally for the London Spectator.

Seventy-five years ago Waugh was one of the world’s most popular writers of fiction. A convert to Catholicism like his friend Graham Greene, Waugh had less aversion to the label “Catholic writer.” For Waugh, joining the church was the result of an investigation into truth; it also came immediately after his first marriage ended. For Greene, it was always more of a matter of coming to terms with evil and sin, his own and others, and originated in his desire to marry a Catholic woman as a young man. Waugh couldn’t sound less like Greene, for instance, when he writes to a friend in Sept. 1964: “Do you believe in the Incarnation & Redemption in the full historical sense in which you believe in the battle of El Alamein? That’s important. Faith is not a mood.”

Waugh’s longtime publishers on both sides of the Atlantic—including Little, Brown and Company here in the United States in December 2012—have spent the last two years rereleasing much of his oeuvre in hopes that interest in his writing will revive. Will it? I wonder. Does anyone read Evelyn Waugh anymore?

The historical books are not great history, and the travel books do not work well as travelogues. No matter, as these are not part of the reintroduction plan of Waugh’s U.S. publishers. Only the novels are still read today.

“Nobody ever wrote a more unaffectedly elegant English,” the critic Clive James once wrote. Waugh’s characterizations of the English between the Wars are impeccable and often hilarious. The novels often reveal England in the 1920s and 1930s to have been an orgy of nihilistic pleasure-seeking, counterpoised against an aristocratic approach to life that sought eternal values. Think Downton Abbey. Given the enormous popularity of Julian Fellowes’s television series, I could imagine Brideshead Revisited being redeveloped for the screen along the lines of “Downton” or the 11-episode series in 1981-82 that was produced by Granada Television, starring Jeremy Irons and named by Time magazine in 2007 as one of the best 100 television shows of all time. Anything but the 2008 film adaptation of Brideshead directed by Julian Jarrod, which was roundly disappointing to those who appreciate the novel.

Waugh’s best work, Brideshead is the story of the Marchmain family, both Catholic and aristocratic, as narrated by young Oxford student, Charles Ryder, a stranger to both ways of life. Waugh used his thorough knowledge of English position and privilege (which he knew firsthand) and his talent for wit and humor as secular tools for imagining how God’s grace can break through into human lives in the most unusual ways. There are many discussions of God and Catholicism throughout the novel, and Charles Ryder converts to both by the end.

Waugh’s earlier novel, Vile Bodies (1930), written just prior to his conversion to Catholicism, took on similar themes. The novel combines light-hearted romantic comedy with the disintegration of all harmony by novel’s end, in the form of a looming and cataclysmic war in Europe. The title itself, Vile Bodies, is likely a reference to Phil 3:21 in the King James Bible.

Like many great novelists, Waugh used his own life as material. Men at Arms (1952), Officers and Gentlemen (1955) and Unconditional Surrender (1961)—later collected together as The Sword of Honour trilogy—follow the life of Guy Crouchback, the scion of another aristocratic Catholic family in England before, during and after World War II. As usual, Waugh combines a somber tale with wicked comedy as, for instance, we watch Guy’s frustration and perhaps virtue, being a devout Catholic, in accepting loneliness rather than remarry without an annulment of his first marriage, which ended in divorce. Another late novel, The Ordeal of Gilbert Pinfold (1957), offers a humorous, slightly veiled fictional account of Waugh’s own nervous breakdown.

Little Brown has reissued all of this fiction in fresh hardcover and paperback editions—15 volumes in all, when you add The Complete Short Stories, as they have. Each of the paperbacks includes a Reading Group Guide at the back; I don’t usually appreciate these as much as others must do. Here’s a sample question from the guide for A Handful of Dust: “Whom do you think Tony loves more: Brenda or Hetton? Can loving a place be as rewarding as loving a person?” Also somewhat strange to me is the plumped-up design of these hardcovers and paperbacks, given the realities of the market for physical books today. We live in an era when the hardcover novel is rapidly dying, one of the casualties of the popularity of e-books. Especially quick to go are the sort of hardcovers that Little Brown has created in these redesigns: over-spacious in typesetting, using paper that was originally intended to “bulk up” a book, making for a thicker spine and thus more noticeable on the bookseller’s shelf. I doubt whether these will ever make it onto many of those shelves.

Take for instance the new edition of The Complete [Short] Stories. When I hold it up to my 2000 edition of the same fiction published in Alfred A. Knopf’s Everyman’s Library imprint, the new edition fails by comparison. Aside from the fact that the Everyman is a sturdily bound hardcover with a ribbon marker and the new one is a trade paperback, the Everyman also includes a thorough Introduction, chronology, textual notes, many additional stories from Waugh’s juvenilia and best of all, black and white illustrations from throughout Waugh’s life and career as an amateur artist. The surest reason for Little Brown’s re-publishing extravaganza seems to be that the Waugh estate has finally agreed to terms for the creation of e-book editions of all of the fiction. So, there they are.

Evelyn Waugh deserves to be remembered. By most accounts, he is one of the best, if not the best writer of English prose of the 20th century. He does aristocracy, privilege, sadness, beauty, romance and wonder better than just about anyone. And he’s better on love and sex than most. There is a reality to Waugh on the everydayness of love that his near-contemporary, D. H. Lawrence, cannot reach with all of his spiritualizing. For these reasons alone, Waugh’s writing is still relevant, and not merely as period pieces.

We also forget how he mentored a young Thomas Merton in the late 1940s as the sage editor for the British editions of two of the young Trappist’s books, including The Seven Storey Mountain, which was retitled Elected Silence in England. Waugh was prescient when he wrote in a letter to a friend just weeks before Seven Storey was published in the United States: “It seems to me likely that American monasticism may help save the world.”

Unless you have an interest in the life of Waugh and his role in the Catholic renaissance of 20th century letters, stick to the novels. His other books are mostly irrelevant today.

This is apparently not so in England, however. There, Penguin Classics did the same sort of reissuing last year—in their case, only in lovely hardcover editions—but included some of Waugh’s travel books, as well as his Catholic histories, like Edmund Campion: Jesuit and Martyr.

The legacy of Waugh in England seems to be broader than it is here, where his prose and storytelling are all we remember. There Waugh remains (with Chesterton and Greene) an intellectual voice of a historic, religious minority, where he will be known more than ever as a distinctively Catholic writer, fiction or nonfiction.

This article also appeared in print, under the headline “Waugh's Head Revisited,” in the April 8-15, 2013, issue.

Jon M. Sweeney is editor in chief at Paraclete Press and the author of The Pope Who Quit: A True Medieval Tale of Mystery, Death, and Salvation, which was recently optioned by HBO, Inc.