Review: What happens when athletic heroes fall out of love with the game? 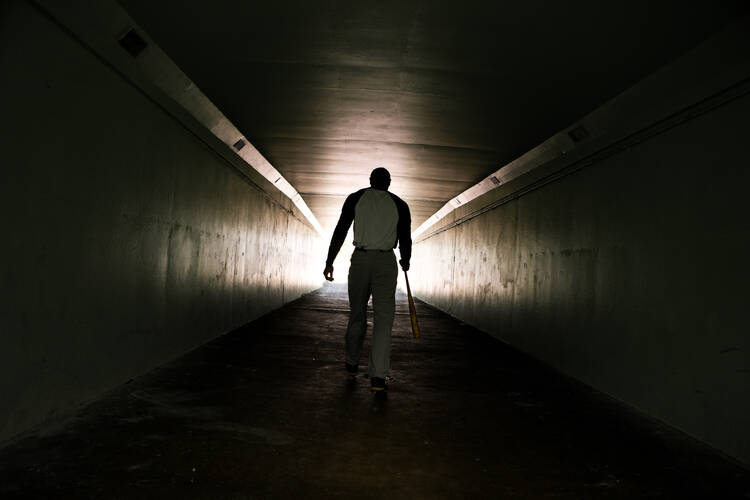 Americans love the odyssey of the triumphant athlete. Inevitably, the story chronicles some success, a downfall, then a stubborn struggle, followed by our hero’s final victory. It is a tale told in thousands of sports memoirs, by everybody from Rafael Nadal (Rafa, 2011) to Grant Hill (Game, 2022) to Michael Jordan (Driven From Within, 1994) to Mary Lou Retton (Creating an Olympic Champion, 1985).

I Am Thirdby Gale Sayers and Al Silverman

But beyond the tell-alls and mea culpas, there is one last, and most difficult, boundary to cross: The Great Athlete admits they weren’t always able to love the game. In a violation of the ultimate rule preached by coaches everywhere, they acknowledge that often their heart just wasn’t in it, or that they didn’t have the right mindset to want to compete. Recall the headlines made by Simone Biles when she withdrew from the individual all-around gymnastics final at the 2021 Olympics in Tokyo. Biles said she didn’t have the mental health she needed to compete. “I say put mental health first,” she said. “Because if you don’t, then you’re not going to enjoy your sport.”

We watch sports in part because we need heroes, and we need our heroes to be as emotionally invested in their battles as we are. If they are, we are willing to forgive all kinds of sins. Fans can knock Barry Bonds or Lance Armstrong for taking performance-enhancing drugs, but they did it because they wanted the same triumph we wanted. But in many cases you play a sport professionally not because you still love it, but because you were very good at it when you were young and it has become how you are able to make your way in the world. This blurs the earnest, idealistic passion we assume of heroes and opens the doors to a complexity that American culture has always tried to keep out of bounds.

If we admit to darkness in the heart of our shortstop, we ourselves are tainted. And then, certainly, we are all in trouble.

If we admit to darkness in the heart of our shortstop, we ourselves are tainted. And then, certainly, we are all in trouble. Only a few sports memoirs have ever crossed that line. Because reality is, in fact, complicated, they are worth considering in depth.

The best I have read is West by West (2011), by Jerry West, the great basketball player from rural West Virginia who starred for the Los Angeles Lakers in the 1960s and 1970s. Here’s how he describes the complicated place of basketball in his heart:

Basketball is, and always has been, a huge, huge part of me, the canvas I tried to paint each time I stepped on the court and never stopped trying to perfect. It’s been my life. It’s been my love. I’ve hated it. Been frustrated with it—and delighted with it—beyond tears. There’s been the allure of the damn basketball (though I am convinced it chose me, not the other way around). And there has always been a constant battle for me to try to find the satisfaction that I should have got by now (should being one of the trickiest, most dangerous words imaginable). It was really hard to find, and even harder to hold on to. It was almost like I was tormented.

West’s memoir, written with Jonathan Coleman, is a unique feat of confessional literature by a pro athlete. He chronicles his dirt-poor childhood, abuse by his father and losing a beloved brother in the Korean War, all of which left him scarred and troubled in his heart, even as he lit up Los Angeles and partied with Frank Sinatra. No wonder his honest account was exploited by the writers of “Winning Time,” the recent HBO show about the Lakers teams of the 1980s. In the TV show, West is portrayed as a hellacious hillbilly with little control of his emotions. West has asked for a retraction and threatened to sue the makers of the show. But because he, unlike his teammates, wrote that book, he made himself vulnerable to that kind of portrayal.

In Forward, Abby Wambach writes that she will never be able to shake soccer, but that it needn’t be everything, and maybe she can integrate it with the rest of herself.

West’s book built on some earlier confessional sports memoirs, including Jim Bouton’s Ball Four (1970),Bill Bradley’s Life on the Run (1995) and Gale Sayers’s I Am Third (1970). Although less celebrated than many memoirs, Sayers’s book remains a fascinating self-examination by a great Black athlete. Sayers was a running back for the Chicago Bears from 1965 to 1971. The book was turned into the movie “Brian’s Song,” about Sayers’s friendship with Brian Piccolo, a teammate killed by cancer in 1970. But that relationship is only one sweet, funny chapter in I Am Third.

Jerry West’s memoir, written with Jonathan Coleman, is a unique feat of confessional literature by a pro athlete.

Like West, Sayers grew up poor, in Omaha, Neb., to parents who struggled with alcoholism. He went on to play football at the University of Kansas, where his speed earned him the nickname “Kansas Comet.” In I Am Third, Sayers, who died in 2020, conveys an awareness of his own struggles with meaning, partly through the collaboration of his then-wife Linda, who writes part of the book and appears in dialogues.

Linda: What are you thinking about?

Linda: But you are.

Gale: Am I relaxing when I have my music on?

Linda: Like me, when I’m sitting down in the evening, I’m—

Linda (remaining calm, but with a hard edge coming into her voice): Most people find something to lose themselves in.

LINDA: Some people don’t want to tell themselves the truth.

Gale (becoming sarcastic): And you say I’m one of those people, huh?

He is one of those people and, at some point, in many situations, we are, too.

A more modern incarnation of this dynamic, with a much different origin story, is recounted by the U.S. women’s soccer star Abby Wambach in her book Forward (2016). Wambach was the youngest of seven children in a Catholic family outside of Rochester, N.Y. Her mom named her Mary Abigail after the Virgin Mary. She was a rebellious child who happened to be brilliant at playing soccer, particularly scoring goals. Her mom, who with a large brood was surely desperate to keep Abby occupied, pushed her to stay with soccer. And it worked, more or less.

In I Am Third, Gale Sayers reveals conflict, self-doubt and apathy in his inner life.

As a child, Wambach writes, she knew she was “incapable of falling in love with the game itself—only with the validation that comes from mastering it, from bending it to my will.” Wambach recounts her struggles with addiction to drugs and alcohol, including a D.U.I. arrest in 2016, a failed marriage and her attempts to come to terms with her homosexuality, among others. But even more painful is the question of who she is beyond soccer. Will you still love me, she seems to be crying through the book, when I’m not scoring goals?

She does more than score goals, of course. During Wambach’s tenure, the U.S. women’s national team rose to fame and won a world title in 2015. She became the team leader and one of the most famous athletes in the nation, leading the national team in scoring goals. Her signature move: the diving header.

Confronting Racism in Basketball and the Jesuits: The Extraordinary Life of Georgetown’s John Thompson
Bill McGarvey

Like West and Sayers, Wambach realizes that success is not enough to create self-acceptance and self-fulfillment. In Forward, she writes that she will never be able to shake soccer, but that it needn’t be everything, and maybe she can integrate it with the rest of herself. “I can’t deny [soccer] any more than I can deny the labels I’ve claimed in this book: fraud, rebel, wife, advocate, addict, failure, human—all of them,” she concludes. “They’ll always be there, stitched into my psyche, even as I make room for new labels, ones I’ve yet to discover and claim.”

It is that openness to a new way of loving and being loved that might save her, and, maybe, us. Maybe we can learn to love our heroes better.

This article also appeared in print, under the headline “Sporting Struggles,” in the October 2022, issue. 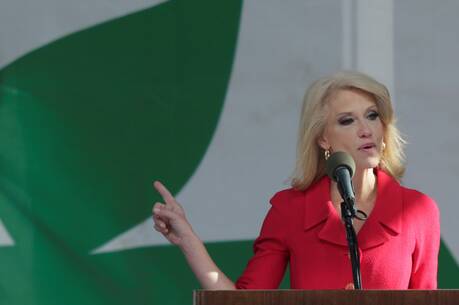 Kellyanne Conway’s Catholic girlhood and my own
Mary Gordon finds that her childhood and that of former Trump advisor Kellyanne Conway were strangely similar—and yet diverged in telling ways.
Mary GordonSeptember 15, 2022