The Spiritual Strength of Simone Biles 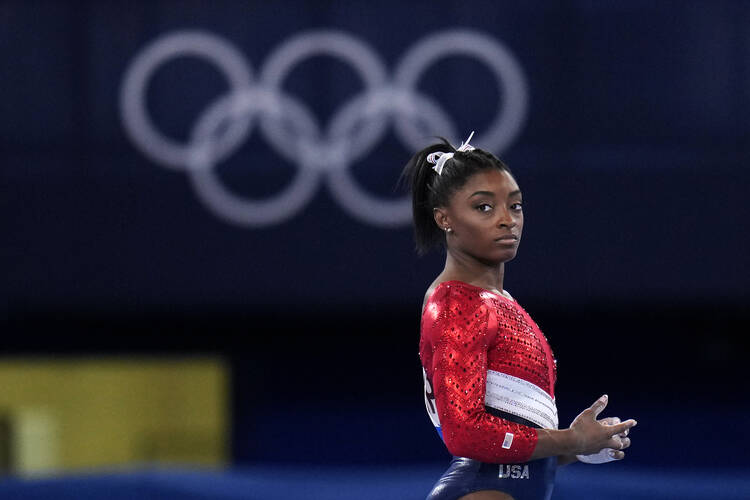 Simone Biles, of the United States, waits to perform on the vault during the artistic gymnastics women's final at the 2020 Summer Olympics, Tuesday, July 27, 2021, in Tokyo. (AP Photo/Gregory Bull)

Simone Biles is widely acknowledged as the greatest gymnast of all time. But in light of her decision yesterday to withdraw from the individual all-around gymnastics competition at the 2021 Tokyo Olympic Games, it’s time to acknowledge her new public role of spiritual director.

Many have pointed out the importance of Naomi Osaka, Kevin Love and others making it more acceptable for athletes to prioritize their mental health above an endless pursuit of success in competition. Thankfully, Ms. Biles has largely been celebrated for the decision to do so. But it’s also worth looking at how someone makes a decision like that.

I’m not a therapist, a gymnast or someone who has performed at anywhere near the same level as Ms. Biles. But I am someone who has had to think through big decisions and has, at times, seriously screwed up in making those decisions and has sought the advice of many spiritual directors. Frequently, we wind up discussing whether or not I have the sufficient interior freedom to make a choice.

Simone Biles has largely been celebrated for the decision to withdraw. But it’s also worth looking at how someone makes a decision like that.

Freedom remains the least-understood and most-touted American virtue. Interior freedom is perhaps an even more difficult thing to define, let alone live out and respond to. St. Ignatius, founder of the Society of Jesus, described it as “detachment” in the Spiritual Exercises. “We must make ourselves indifferent to all created things, as far as we are allowed free choice and are not under any prohibition,” Ignatius wrote. That leads to some jarring consequences: “As far as we are concerned, we should not prefer health to sickness, riches to poverty, honor to dishonor, a long life to a short life.”

Ignatius advised that we should ask in prayer to be free from attachments . He understood how easily the stuff of our lives, even things that have been good to us  can end up becoming so important to us they get in our way from seeing the world as it really is. As a result our ability to perceive and respond to God’s invitations becomes more difficult. We can be attached to narratives about who we are and who other people are, to plans and goals, to monetary gain, to social capital, to what others think about us. Ignatius also recognized that it is possible for things that at first or even second glance seem like good desires and attachments to rule over our lives in a way that imperils our freedom.

What could some of outside pressures on Ms. Biles be? They aren’t difficult to imagine: expectations of being the G.O.A.T. and performing as such, sponsorships, representing family and an entire country. “I truly do feel like I have the weight of the world on my shoulders at times,” Ms. Biles wrote on Instagram a few days ago after the preliminary trials. “I know I brush it off and make it seem like pressure doesn’t affect me but damn sometimes it’s hard.”

One of the consequences of making a free choice is that not everyone will understand it.

Even if we aren’t carrying around the pressure of performing as one of the greatest athletes of all time, we are all susceptible to the undercurrents in our culture that preach grit, grind and pushing through. Whether for money or for social acceptance, the impulse to never! stop! improving! adds to the perils of a wellness culture that says we’ll be perfect if we just practice self-improvement until we’re dead. Simone Biles has offered us proof that impulses to be the best do not need to rule over our lives.

It takes a tremendous amount of spiritual freedom and an equal amount of bravery to make that choice. One of the consequences of making a free choice is that not everyone will understand it. How could they without a clear window into your soul? While Ms. Biles has been largely embraced for prioritizing her mental health, some cantankerous commentators have tried to say her choice is a result of the modern coddling of millennials and Gen-Z, and it would be unfathomable for someone like Michael Jordan to bow out of a competition (these commentators seem to be unaware that Jordan did quit basketball in his prime to try to focus on his mental health after his father died).

Simone Biles’s self-knowledge and detachment from the narratives surrounding her allowed her to see how her actions affected those close to her, like her teammates.

Ms. Biles’s self-knowledge and detachment from the narratives surrounding her allowed her to see how her actions affected those close to her, like her teammates. She acknowledged that because her performance was slipping, she “didn’t want to risk the team a medal.” Through honest humility, she was able to see with clear eyes how her participation would affect the team.

And despite not needing to, Ms. Biles showed an awareness that she could teach the rest of the world something through her action: “It’s O.K. sometimes to even sit out the big competitions to focus on yourself,” she answered at a press conference after she withdrew from competition. “Because it shows how strong of a competitor and person you really are.”

In a 1967 letter issued to every Jesuit around the world, Pedro Arrupe, S.J., the former superior general of the Society of Jesus, wrote that “we wished our lives and work to be free from a striving for gain—sometimes a tyrannical force,” and that “the modern world is in need of men who boldly bear witness that they have been liberated from this force.” Well, modern world, meet a modern woman liberated from that force.