Do you love sci-fi and religion? You’re not alone. 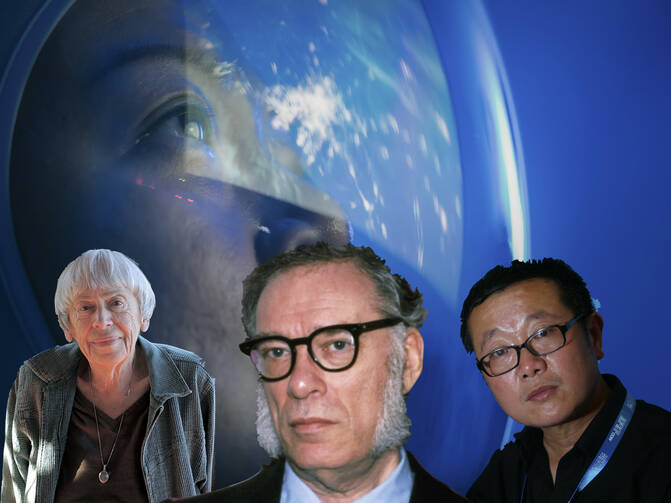 Do you cringe when you’re watching “Star Wars” and Han Solo says the Millennium Falcon did the Kessel Run in less than 12 parsecs, because a parsec is a unit of distance, not time? Are you offended that Chekov and Khan recognize each other in “Star Trek II: The Wrath of Khan,” because by Star Trek canon they’ve never met? Do you think “John Carter” is the worst movie ever for the way it bastardized the vision of Edgar Rice Burroughs?

You just may be a sci-fi nerd.

One of Pope Francis' favorite books is Robert Hugh Benson’s 1903 sci-fi classic Lord of the World.

You’re in good company. Barack Obama was a huge fan of the Chinese writer Cixin Liu’s “Remembrance of Earth’s Past” trilogy. Two editors in chief of America were sci-fi buffs. So too is Pope Francis: One of his favorite books is Robert Hugh Benson’s 1903 sci-fi classic Lord of the World, which was reviewed more than a century after its publication by Robert E. Hosmer in America in 2016.

While science fiction hasn’t been covered often in the pages of America, a few authors figured the way to an America editor’s heart: Make the review about religion instead.

In 1981, America published a feature-length article by Dr. Willis E. McNelly on “Science Fiction and Religion.” An English professor at Cal State Fullerton and an expert on Geoffrey Chaucer, T. S. Eliot, James Joyce, William Shakespeare and William Butler Yeats, McNelly was also a fierce evangelist for science fiction as a literary genre. He authored The Dune Encyclopedia (a companion to Frank Herbert’s Dune novels) and edited several textbooks on science fiction as serious literature. He and his wife were also prominent figures in the Catholic lay action movement in the United States during the late 1940s and early 1950s.

McNelly’s article shows his encyclopedic knowledge of English-language science fiction. (It also demonstrates his enormous vocabulary and willingness to employ it: I was sent to the dictionary thrice, for “jongleur,” “deliquesce” and “extrauterine recapitulation.”) “At first glance the two terms [science fiction and religion] seem almost antithetical, yet a close examination of much of the best science fiction of the last decade reveals just the opposite,” McNelly wrote. “[R]eligion or religious themes have provided contemporary speculative literature with some of its most cogent extrapolations, and, perhaps not coincidentally, with some of science fiction’s very best novels and short stories.”

At first glance science fiction and religion seem almost antithetical, yet a close examination of much of the best science fiction of the last decade reveals just the opposite.

While recognizing that “the traditional antagonism between science and religion should surface in science fiction” was probably inevitable, McNelly also noted that the mainstays of science fiction who emerged in the 1940s and after—Isaac Asimov, Arthur C. Clarke, Jack Williamson and more—were not so much anti-religious as nonreligious. Further, the decades since have produced numerous prominent sci-fi authors who are either fluent in religious themes or explicitly brought them into their work, including Frank Herbert, John Boyd, Robert A. Heinlein, James Blish (McNelly was wrong about Blish, he’s terrible), Walter Miller Jr., Philip K. Dick and Ursula Le Guin.

The last two, he noted, had not only produced “two of the finest works yet produced in science fiction” in Le Guin’s The Left Hand of Darkness and Dick’s The Man in the High Castle, but had branched out beyond the typical religious constructs of Christianity or Islam or Judaism—Le Guin with the Tao and Dick with the I Ching of ancient China.

“What of the future of religion and science fiction? I would like to venture one quiet, modest prediction, very quietly and very modestly,” McNelly concluded. “As science fiction and the mainstream increasingly merge—and we see this happening in such writers as Nabokov, Lessing, Pynchon, Durrell, Barth and many others—the artificial dichotomy between science and religion, indeed, between science fiction and ‘Literature,’ with a capital ‘L’ will fade, or to use a scientific term that I find particularly applicable here, deliquesce.”

The mainstays of science fiction who emerged in the 1940s and after were not so much anti-religious as nonreligious.

When America ran a special “Space Issue” in 2019, it gave Tom Deignan a chance to ask a curious question: “Why do Catholic priests keep popping up in sci-fi?” He has a point: Almost all the aforementioned authors and many more, including Ray Bradbury, Arthur C. Clarke, James Blish, Walter Miller Jr. and Mary Doria Russell have made priests the protagonists of stories or entire novels. As far back as the 1620s, the Anglican bishop Francis Godwin included Jesuit priests as characters in his The Man in the Moon.

Further, Deignan notes, most of these depictions are not the stock caricatures or superstitious villains one might expect. “It might seem as if Christianity—especially Catholics, and especially Jesuits—would be an easy target for sci-fi writers. But science fiction has also treated Jesuits and other religious figures and ideas with admirable complexity,” Deignan wrote. Further,

at a time of such open disdain in certain (especially bookish) quarters for religious matters in general—and Catholicism, in particular—perhaps we should also not overlook the value of these generally sympathetic depictions of spiritual people, struggling openly and honestly with sex and love, faith and mortality, not to mention an alien race or two.

In a passage that can sound a bit cringeworthy today, the Rev. Clifford Stevens, a U.S. Air Force chaplain, made the case in a 1967 issue of Liturgical Arts that priests would be central to any colonization effort in space. “Priests stood with Columbus and Magellan on the journeys into the unknown, and with the Vikings, too, when they explored the unknown western ocean,” he wrote. “Man stands now on the threshold of a far more breathtaking discovery, and so it is not unfitting for the theologian, symbolically or otherwise, to put on a space suit.”

Catholics in space? It was also the subject of the most fun America story I myself have ever had the chance to write, one that asked another question: “What would a chapel on the moon look like?”

“It is not unfitting for the theologian, symbolically or otherwise, to put on a space suit.”