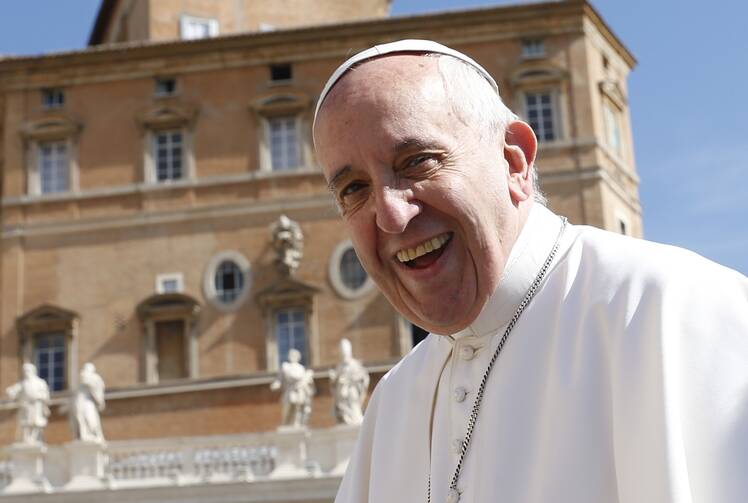 Pope Francis smiles as he arrives to lead his general audience in St. Peter's Square at the Vatican May 18, 2016. (CNS photo/Paul Haring)

It is no secret that Pope Francis loves literature: He slips references to Greek and Roman classics into his interviews, includes excerpts from poetry in his encyclicals and, during the pandemic, referenced the 19th-century Italian plague novel The Betrothed countless times.

His literary references go beyond appreciation, though: Literature informs how Pope Francis sees the world and how he leads the church. Take The Betrothed, for example: The novel’s main action takes place in a lazaretto, a field hospital run by Franciscans, which papal biographer Austen Ivereigh believes was the inspiration for Pope Francis’ frequently invoked image of the Catholic Church as a field hospital. During the pandemic, Pope Francis often cited the novel, taking inspiration from one of the Franciscan friar’s sermons that urged plague survivors to consider why their lives were spared and to resolve to build a future “which shall be all charity.”

Literature informs how Pope Francis sees the world and how he leads the church.

In this special episode of America Media’s “Inside the Vatican” podcast, Mr. Ivereigh joins host Colleen Dulle to discuss three literary works that have shaped Pope Francis: The Betrothed, by Alessandro Manzoni; Lord of the World, by Robert Hugh Benson; and a short story, “The Garden of Forking Paths,” by the Argentine writer Jorge Luis Borges. Think of it as a Pope Francis-inspired summer reading list—if your idea of a beach read is an 700-page plague novel, a dystopian story about the Antichrist or a bizarre spy story beloved by media theorists and quantum physicists!

Listen to the special episode:

1. The Betrothed, by Alessandro Manzoni

When Pope Francis was a boy, his grandparents used to read to him from this Italian classic, the definitive edition of which was published in 1842. For many years, the future pope could recite the opening sentences from memory. In fact, when Francis was elected in 2013 and gave his first major interview, published in America magazine, he had the book sitting on his desk.

The epic, 720-page Italian novel follows a young couple, Renzo and Lucia, who hope to get married but find their plans thwarted by the local baron, Don Rodrigo, who hires thugs to scare the parish priest from going forward with the wedding. The lovers’ separation and struggle to be reunited plays out amid a plague in 1630s Milan, where a large section of the city has been converted to a field hospital, or lazzaretto, run by a brave group of Franciscan friars. It is there that Renzo, searching for Lucia, comes across the Franciscan superior, Father Felice. He is delivering a sermon to a group of plague survivors, asking them to consider why their lives had been spared and urging them to go forward, living lives “which shall be all charity.”

Pope Francis has referred to The Betrothed often, borrowing its image of the lazzaretto to describe the church not as “a museum for saints but a hospital for sinners.”

Pope Francis has referred to The Betrothed often, borrowing its image of the lazzaretto to describe the church not as “a museum for saints but a hospital for sinners”—an image he has put into practice by instituting a Year of Mercy in 2016 and allowing, in some cases, divorced and remarried Catholics to return to Communion. The pope has also recommended the novel to young couples discerning marriage.

Why read it? Besides coming highly recommended by the pope, this classic Italian romance makes for an enthralling read—and one that provides a jumping-off point for considering the future as we emerge from the Covid-19 pandemic.

2. Lord of the World, by Robert Hugh Benson

Although it isn’t certain where Pope Francis first encountered this 1907 dystopian novel, penned by a well-known English monsignor, it is one of the books Pope Francis often recommends for understanding his warnings about the “ideological colonization” that can come from globalization—that is, the danger of one culture becoming so dominant that others assimilate to it and lose their “local flavor” (cf. “Fratelli Tutti,” No. 142).

This short novel describes the rise of the Antichrist, who comes in the form of a seductive global leader, Julian Felsenburgh. The world’s nations declare an end to all wars after Felsenburgh reveals to them that there is no God and that divinity is contained completely in humanity. Ultimately, the nations come together to worship Felsenburgh, and the small Catholic Church that remains gears up for a final, apocalyptic battle between the pope and the so-called “Lord of the World.”

Lord of the World is one of the books Pope Francis often recommends for understanding his warnings about the “ideological colonization” that can come from globalization.

Why read it? Recommended by both Pope Francis and Pope Emeritus Benedict XVI, Lord of the World adeptly renders into prose fiction a number of theological concepts that have been important to the last two popes: Julian Felsenburg is a textbook example of St. Ignatius’ description of the evil spirit appearing “as an angel of light”; the secular humanist religion around Felsenburg shows the danger of what theologian Henri de Lubac, S.J., called “spiritual worldliness”; and the homogeneity that overtakes the world illustrates one of the reasons why Francis and Benedict have, at times, been highly critical of globalization. This novel will challenge ideas from across the church-political spectrum, and the apocalyptic sci-fi plotline makes for a quick and engaging read.

3. “The Garden of Forking Paths,” by Jorge Luis Borges

Our last selection, a short story by Pope Francis’ fellow Argentine, comes with a charming backstory: When Pope Francis was a young Jesuit teaching literature at a high school in Buenos Aires, he managed to get the celebrated writer Jorge Luis Borges to spend a few days speaking with his students—an appearance that faculty members at a nearby university compared to “the Berlin Philharmonic coming to play ‘happy birthday’ at a children’s party,” one of Bergoglio’s students, Jorge Milia, recalls in Mr. Ivereigh’s book The Great Reformer.

After Borges’s appearance at Bergoglio’s school, the young Jesuit challenged his students to put their lessons into practice by writing their own short stories, which Bergoglio sent to Borges to look over. To Bergoglio’s surprise, Borges wrote back that he loved the collection of stories and wanted to write a prologue to it. It was published soon after under the title Original Stories.

Read this story for a quick introduction to a writer Pope Francis respects and for another entryway into reflecting on the future: This time, in the form of a warning—reflect, then go forward and act!

Pope Francis references Borges’s writing often; he cited one of Borges’s poems, “Calle Desconocida,” in his encyclical “Amoris Laetitia” and referred to “The Garden of Forking Paths” in his book with Austen Ivereigh, Let Us Dream.

A psychological puzzle within a spy story, “The Garden of Forking Paths” describes a mystery surrounding a great writer who was believed to have left behind one great novel and a labyrinth. Ultimately, it is revealed that the novel is the labyrinth: It is a story that accounts for every possible path, some of which double back on themselves, forming an inescapable maze.

Pope Francis: Don’t forget that Jesus is praying for you — right now and always.
Pope Francis

Pope Francis borrows the image in Let Us Dream, in which he speaks about life after the pandemic, warning against getting stuck in a labyrinth of “forking paths of endless possibilities that never get us to where we need to be”—that is, against thinking so much about the future that we forget to live it.

Why read it? Jorge Luis Borges’s writing is humble and playful. Read this story for a quick introduction to a writer Pope Francis respects and for another entryway into reflecting on the future: This time, in the form of a warning—reflect, then go forward and act!