What ‘The Lord of the Rings’ can teach us about U.S. politics, Christianity and power 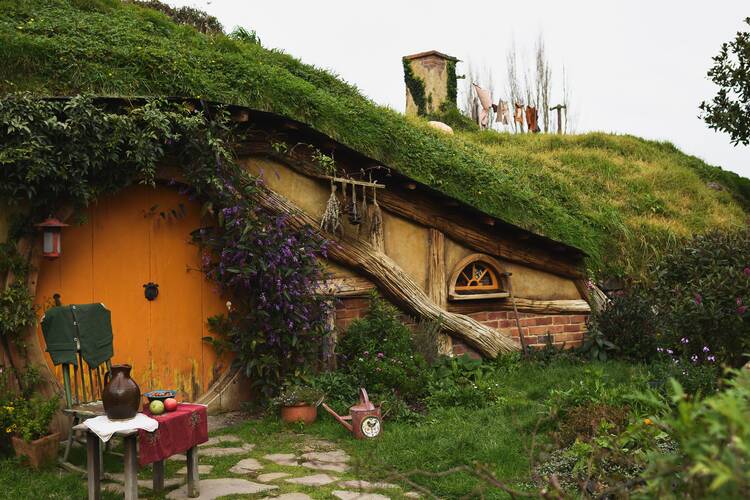 The "hobbit hole" of Samwise Gamgee, built in New Zealand as a prop for "The Lord of the Rings" movie trilogy (Nikhil Prasad on Unsplash).

I always thought the Shire was better than the Ring of Power.

To love The Lord of the Rings, one must desire the simple life of ordinary things, of anonymity, of local community, of what can still sometimes be found in rural, small-town America. When Frodo has lost all hope near the top of Mount Doom in the final installment of J.R.R. Tolkien’s famous trilogy, his companion and fellow hobbit Sam Gamgee remembers the Shire for him. The film version captures the scattered reminiscences of Sam in one adapted paragraph of dialogue:

Under the burden of the Ring of Power around his neck, which gains greater sway as they ascend to the Cracks of Doom, Frodo laments, “No taste of food, no feel of water, no sound of wind, no memory of tree or grass or flower, no image of moon or star are left for me.” For the story to work, Tolkien depends on an audience that will refuse a compromise that exchanges one’s delight in small, ordinary things for the provision of great power.

Yet, I worry this audience is diminishing.

To love The Lord of the Rings, one must desire the simple life of ordinary things, of anonymity, of local community, of what can still sometimes be found in rural, small-town America.

Tolkien was a Catholic, and although he wrote stories that are not didactic regarding his beliefs, they imagine a world that imitates the one that the triune God created. Through fiction, Tolkien expounds on human nature, our responsibilities, our desires and our temptations. When the hobbit Pippin declares that he would rather not be dealing with the war engulfing Middle Earth, the wizard Gandalf wisely responds, “All we have to decide is what to do with the time that is given us.” Is that not so true? We cannot wish ourselves into a different time and place. We cannot alter the world to be something other than it is. Our choices are limited to how to employ the gifts we have received. In one line, Gandalf explains vocation to Pippin and to the audience. Rather than overcome your limitations, listen to them as a guide for how you are to be in your particular time and place.

In many ways, The Lord of the Rings imitates Scripture. Over and over again in the Old Testament, the Lord calls the smallest and weakest. Remember when Samuel visits Jesse’s home? He is predisposed by his culture to choose the tallest in stature and most powerful to anoint as the next king of Israel. But the Lord leads him to anoint the youngest son, David, the scrawny boy shepherd in the fields. Similarly, Gandalf must continually remind the fellowship in The Lord of the Rings trilogy not to underestimate their hobbit companions. Their size may be diminutive, but they are persevering, courageous and loyal. They have virtues that are needed to withstand the temptation of the Ring; they can handle the long journey; they will accomplish the heroic good not by power but by repeated good actions in the face of hopelessness.

Those who crave power have no friends, only temporary alliances. They have no joy in singing, dancing or telling stories. They lose the taste of strawberries.

The novels read like a combination of the Iliad and the Odyssey (but without the compression that Virgil performs in the Aeneid). There are battle scenes with heroic actors, and ultimately the journey concludes with the hobbits returning home. Simone Weil has argued that “force” is the main protagonist in the Iliad, dehumanizing Achilles and the other warriors who behave like predators—they are compared to lions and wolves. A contemporary, Rachel Bespaloff, argues that force can be divine rather than animalistic.

When Hector employs force to save Troy and protect his family, he acts in a godlike manner. Force cannot be condemned, Bespaloff claims, because it is inevitable. Instead, we must decide whether to use force toward protecting life or sacking cities. One can tell these women wrote under the pressures of the Nazi invasion of France. A veteran of World War I, Tolkien aligns with Bespaloff. In Lord of the Rings, force responds defensively rather than offensively. The hobbits fight to defend the Shire.

Like an ancient epic, such as the Odyssey, The Lord of the Rings is a slow read, with three volumes of a journey that compels the reader to become a pilgrim herself. Readers who want immediate gratification, in which heroes prevail, will be disappointed. Whereas Homer’s story relies on xenia (hospitality) for its distinctions between good and evil, Tolkien emphasizes resistance to power against lust for power. In the Odyssey, the good characters know how to make strangers into guests (instead of into meals); in The Lord of the Rings, the heroes band together in fellowship and friendship to withstand the One Ring. Those who crave power have no friends, only temporary alliances. They have no joy in singing, dancing or telling stories. They lose the taste of strawberries.

By combining war with the journey, Tolkien reveals how these two life narratives are actually one. There is not war and peace, not the Iliad separate from the Odyssey. Instead, our lives are warring pilgrimages, journeys that demand repeatedly for us to fight. In contrast to his ancient predecessors, Tolkien subscribes to a Catholic imagination in which the greatest fight is not external but against temptation. And the most alluring temptation in the narrative, the one that must be resisted no matter what the cost, is the temptation to power.

Unfortunately, Americans seem predisposed to the temptations of power.

Unfortunately, Americans seem predisposed to the temptations of power. We have bought the lie that there are winners and losers in the world, and that winners possess the most power. Instead of hobbits, we celebrate supermen and avengers. Would Clark Kent be a hero without his power? Would we still see the life worth imitating in the farm boy who decided to be a journalist, loved Lois Lane and took care of those around him? If we inhabited Middle Earth, would we act like Boromir or Aragorn?

When we talk about contemporary issues, the word power keeps rising up. Christians laud their power when thousands of them sing hymns of praise at the National Mall, or when their candidate is elected to office. Who is “in power” has become an all-encompassing concern, as though one’s day-to-day morality is affected by the offices in Washington.

Have we forgotten that Augustine still gave sermons while the barbarians sacked Rome, that Boethius wrote The Consolation of Philosophy from death row, that Dante was exiled and powerless when he crafted The Divine Comedy, or that Julian of Norwich shared her gifts from her anchoress's cell in the side of her church? We do not need the seat of power to protect the Shire. We need to practice loving the Shire.

The Fellowship of Tolkien and Lewis
The Editors

When people justify their voting choice by its outcome, I always think of The Lord of the Rings. Tolkien emphasizes repeatedly that we cannot make decisions based on the hoped-for result. We can only control the means. If we validate our choice of voting for someone that may not be a good person in the hopes that he or she will use his power to our advantage, we succumb to the fallacy of Boromir, who assumed he too would use the Ring of Power for good. Power cannot be controlled; it enslaves you. To act freely is to acknowledge your limits, to see the journey as a long road that includes dozens of future elections, and to fight against the temptation for power.

Tolkien himself did not see history as a series of worldly victories: “Actually I am a Christian and indeed a Roman Catholic,” he once wrote in a letter, “so that I do not expect ‘history’ to be anything but a ‘long defeat’—though it contains...some samples or glimpses of final victory.” Ultimately, it should not be power that we seek, a worldly game and a worldly goal, but the love of the small things. We should invest our time delighting in the beauty of the Shire.

[Read this next: Jesuit tools to help you survive the election (and its aftermath)] 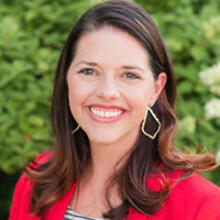 Jessica Hooten Wilson is the Louise Cowan Scholar in Residence at the University of Dallas in the Classical Education and Humanities Graduate Program. She is the author of three books.

@HootenWilson
Show Comments ()
Join the conversation: Login or create an account
Before you can comment, you need to update your profile to include your first and last name, as required in our comments policy. Then reload this page and you'll be set up for commenting. Update your profile