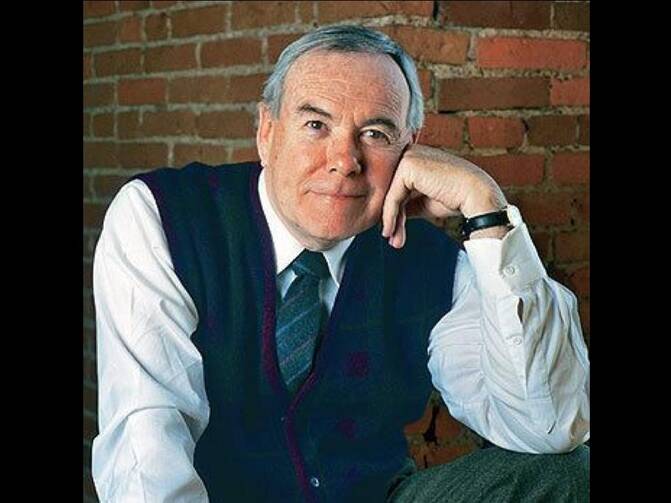 The Jesuit sociologist Joseph Fichter once made a bold proclamation about American Catholic culture: “The centers of creativity in American Catholicism seemed to be concentrated in a triangle that reached from St. John’s to Chicago to Notre Dame.” The St. John’s referenced in this blasphemous statement (Jesuits, amirite?) is St. John’s Abbey of Collegeville, Minn., the great Benedectine abbey and the educational and literary institutions that have grown up around it.

St. John’s is known to church historians for its important role in liturgical reform (starting well before the Second Vatican Council and continuing through it) and for its important influence on church architecture, music, preaching and more. Bookworms might also remember it for a 1955 alumnus of St. John’s College who spent much of his life on and around the campus, the novelist Jon Hassler.

If you don’t remember Jon Hassler, it may be because he never much felt the need to stray too far from his roots in the Upper Midwest, either in his life or his fiction.

If you don’t remember Jon Hassler, it may be because he never much felt the need to stray too far from his roots in the Upper Midwest, either in his life or his fiction. Born in Minneapolis, he became a high school teacher in Minnesota after graduating from St. John’s. In 1960, he earned a master’s degree from the University of North Dakota—with a thesis on moral decision-making in the novels of Ernest Hemingway—and from 1965 until 1980, he taught at various area colleges including St. John’s, where he became writer-in-residence in 1980.

When he died in 2008, his obituary in The New York Times quoted a review from 1997 by Diana Postlethwaite, a professor of English literature at St. Olaf College in Northfield, Minn., of Hassler’s 1997 novel The Dean’s List: “Forget Garrison Keillor and the Coen brothers. Jon Hassler is Minnesota’s most engaging cultural export.”

Hassler started out writing short stories, using John Cheever as his model, and turned one story into his first novel, Staggerford, in 1977. His short stories and novels were straightforward affairs, written simply but eloquently, the language reflecting the no-nonsense and practical lives of his characters. The novelist Richard Russo noted in 1990 that “Mr. Hassler is one of those writers who make storytelling look so easy that the severe guardians of contemporary literature may be suspicious. Part of Jon Hassler's brilliance has always been his ability to achieve the depth of real literature through such sure-handed, no-gimmicks, honest language that the result appears effortless.”

Though Hassler himself once told the Associated Press that he liked to write about misfits—“You can't write a novel about somebody who's perfectly happy”—Staggerford and many of his other books were at least in part autobiographical. “On the surface it is the story of a burnt-out high school teacher in the small, fictional northern Minnesota town of Staggerford,” wrote Ed Block in a 2015 appreciation of Hassler for America, and “readers will marvel at the picture of a high-school teacher’s drudgery and the sheer exuberance of the satire and the humor.” Block, who later wrote an intellectual biography, Jon Hassler—Voice of the Heartland (reviewed for America here by Ellen O’Connell Whittet), wrote that by the novel’s end, “the reader is left with a sense of grace and mystery despite the tragedy.”

Staggerford was followed by a novel every few years for two decades, 11 novels in all. The famous priest-sociologist (and author of novels of a, ahem, racier nature than Hassler’s) Andrew Greeley identified four of Hassler’s novels——Staggerford, North of Hope, A Green Journey and Dear James—as books that “might have a critical impact on the self-understanding of Catholics of the importance of religious symbols (sacramenta) on Catholic life” in a 2008 article for America in which he described Hassler as “the last Catholic novelist.”

Andrew Greeley: “Hassler’s work, I suspect, is not well known among Catholics, even Catholics who teach literature, because it is not grim enough."

“Hassler’s work, I suspect, is not well known among Catholics, even Catholics who teach literature, because it is not grim enough,” Greeley wrote. “The proper model, the teachers might say for Catholic fiction, is Flannery O’Connor or Léon Bloy. Or, as I say to my friend John Shea, it is a story that is entirely dark until the strike of one bolt of lightning, which briefly and suddenly illuminates the sky and then permits the darkness to return.” Hassler, however, located his epiphanies and moments of grace in simpler things, like a reconciliation between lovers or a kindness done by a former teacher to a troubled student. “As the country priest says at the end of George Bernanos’s Diary, grace is everywhere,” Greeley wrote. “It was Jon Hassler’s gift that he saw that presence of grace.”

Hassler had a sense for the unease experienced by many Catholics during the 1960s, both because of the innovations wrought by the Second Vatican Council and because of rapidly changing social mores. A nun in Dear James scandalizes some of the congregation by beginning prayers at a funeral with “Our Mother who art in heaven,” for example, and the priest protagonist of North of Hope falls in love in middle age with his childhood sweetheart and contemplates leaving the priesthood.

Hassler’s recurring character of Agatha McGee (the no-nonsense schoolteacher of his Staggerford novels, based in part on Hassler’s own mother) was fairly consistently portrayed as resenting—or ignoring—any changes in the church after the council. “Hassler said on a number of occasions that Agatha’s conservative, pre-Vatican-II Catholicism expressed a part of himself,” Block wrote, “observing that when Agatha complained about the church’s excesses, it relieved him from having to do so.” Hassler wrote only once for America, but it was on a momentous occasion: The great author (and fellow Collegeville homebody) J.F. Powers had died, and Hassler penned his obituary for the magazine in 1999. Hassler captured Powers’s pleasant but brooding mein but also conveyed something of the tight bonds the Collegeville community had. The two authors ran into each other in the post office or at the library more than anywhere else; neither strayed far from either.

In 2008, America honored Hassler as its latest recipient of the Edmund Campion Award, given to a distinguished person of letters, for his novels that “examined with infinite compassion the lives of the residents of small-town Minnesota, and typically touched on overtly Catholic themes… His lapidary writing and wondrous ability to create fully-formed characters—alive physically, mentally, emotionally and spiritually—marked all his fiction.” Other recent recipients included the aforementioned Father Greeley, Muriel Spark, John Updike, Chinua Achebe, Daniel Berrigan, S.J., and Daniel Patrick Moynihan. Because Hassler died on March 20 of that year, his widow, Gretchen Hassler, accepted the award at a ceremony in Collegeville on his behalf.

The setting would surely have pleased Jon Hassler: Why go to New York when Collegeville is already here?

On another note: Two weeks ago we announced the winner of the 2022 Foley Poetry Contest: Lisa Mullenneaux, for her poem “In Copenhagen.” Congratulations! Readers can view all of America’s published poems here.