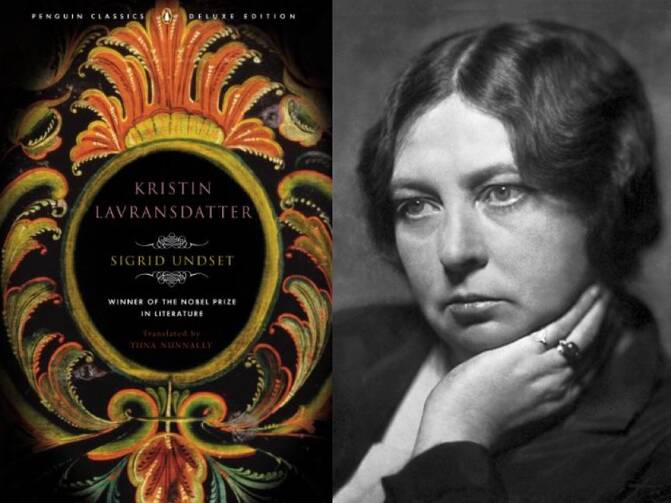 Who’s your favorite Catholic novelist? A number of America editors and contributors over the years have answered that question with a surprising name—or at least a name that might surprise us in 2022: Sigrid Undset. The winner of the Nobel Prize in Literature in 1928, Undset was a leading figure of the Norwegian intelligentsia in the 1920s and 1930s. When she fled to the United States after the Nazi invasion of Norway in 1940, she became a frequent contributor to U.S. literary and political journals—including America.

Former editor in chief Drew Christiansen, S.J., put Undset’s Kristin Lavransdatter trilogy “near the top of my all-time favorite list.” Former literary editor Raymond Schroth, S.J., remembered his father reading Kristin Lavransdatter aloud to his mother as she knitted in the evenings. After entering the Jesuits years later, he discovered the trilogy “to be the favorite of Jesuit seminarians in the late 1950s, perhaps because for many, still in their teens, it was a rare romantic experience.” The Rev. Robert E. Lauder, a frequent film and book reviewer for America for many years, argued that Kristin Lavransdatter “is the greatest Catholic novel ever written.”

Born in 1882 in Kalundborg, Denmark, Sigrid Undset moved to Norway with her family when she was two and grew up in Oslo (known then as Kristiania), the capital of Norway. She published her first novel at the age of 25; her gritty depictions of the life of women in the city (including tales of adultery) made her something of an avante-garde author in the years before the First World War. Her conversion to Catholicism in 1924 caused a stir in heavily Lutheran Norway—especially as the first volume of Kristin Lavransdatter was enjoying success at home and abroad. Soon after the third volume of that trilogy was published in 1927, she was awarded the Nobel Prize.

The chairman of the Nobel Committee noted that Undset was that rara avis among Nobel recipients: She received the award “while still in her prime, an homage rendered to a poetic genius whose roots must be in a great and well-ordered spirit.”

Settling in Brooklyn Heights after fleeing the Nazis in Norway (where her son was killed in battle), Undset began speaking and writing against totalitarianism and both Hitler and Stalin, including in America, where she was acquainted with longtime editor John LaFarge, S.J. In June 1942, America printed a talk she had given to the “Gallery of Living Catholic Authors” in New York City the month before, on “Truth and Fiction.”

Sigrid Undset: "Revolt, betrayal, denial, or indifference, sloth, laziness—which of us has not been guilty in one or more or all of these sins some time or other?"

Undset began with a bit of wisdom that an “old Norwegian farmer’s wife once handed out to me, as the principle on which she had been brought up and in her turn had brought up a large family of fine men and women: ‘Never tell a lie. And don’t tell a truth, unless it is necessary.’” (Those surprised at such a spicy beginning would not have read Undset’s debut novel, whose first line was “I have been unfaithful to my husband.”)

Undset meant to make a point about fiction, a word often used “as if fiction were the opposite of facts. Some kinds of fiction are, of course. But even that kind of fiction need not necessarily be the opposite of truth,” she said. “Facts must be true, but they are not truths, just as wooden boxes or fencepoles or doors or tables are not woods, the society of living, growing trees from which come the wooden implements.” True fiction, likewise, “must necessarily handle facts, but its chief concern must be with the truths behind the facts—the wild mountains from where the tame stones of the pavement and the cultured stone of statuary were quarried, the living woods which yielded the material for lumber mills and carpenter shops and pulp for the million tons of paper we use or abuse.”

“To the Catholic writer,” Undset continued, “the whole world of facts and truths behind the facts will appear in relation to the Ultimate Origin from which everything emanates.” Returning to her opening adage, she reminded her audience never to tell a lie, and “tell the truths you have to. Even if they are grim, preposterous, shocking. After all, we Catholics ought to acknowledge what a shocking business human life is. Our race has been revolting against its Creator since the beginning of time. Revolt, betrayal, denial, or indifference, sloth, laziness—which of us has not been guilty in one or more or all of these sins some time or other?”

But also remember, she said: “You have to tell other and more cheering truths, too: of the Grace of God and the endeavor of strong and loyal, or weak but trusting souls, and also of the natural virtues of man created in the Image of God, an image it is very hard to efface entirely.”

For John Cheever, ‘mere facts’ had nothing on a good story.