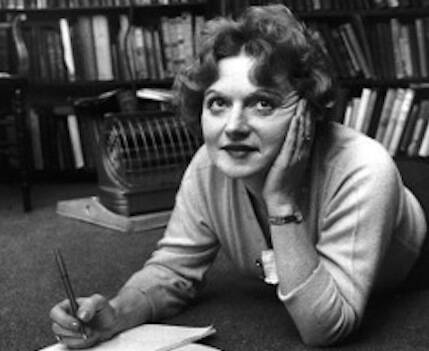 While doing some research for a column on John L’Heureux, I had the occasion to re-read Picnic in Babylon, his memoir of his years studying theology. Between the scholars he met and the writers whose work he was devouring, the book contains some delightful name-dropping, including one that surprised L’Heureux himself at the time: Muriel Spark.

Spark was far more prominent as a writer at the time than L’Heureux, who was still a seminarian and had published a single book of poetry. Spark, a Scottish poet-turned-novelist (though she considered novels inferior, “a lazy way of writing poetry”), was at the height of her popularity, particularly for her novels The Comforters, Memento Mori, The Prime of Miss Jean Brodie, The Girls of Slender Means and The Mandelbaum Gate. (She would author 22 novels in all, three of which were nominated for the Booker Prize.)

Muriel Spark was "always in complete control of both character and plot,” in her fiction and in her life.

In October of 1965, Spark wrote to L’Heureux, apparently somewhat out of the blue. “Do let me know if you are in New York and can spare the time to come along for a drink,” she wrote. “I should enjoy that very much.” L’Heureux described himself as “delighted out of my wits. And I will meet her sometime.” During a visit to New York a few months later, one of L’Heureux’s friends canceled a lunch appointment. “I rang up Muriel Spark. She said she would be delighted to have lunch with me.”

You’ll have to read Picnic in Babylon for the rest; I’m not wasting precious column inches on someone else’s fangirling. Muriel Spark’s reputation has not suffered in the decades since—she was made a dame of the British Empire in 1993, and her novels continue to be adapted for stage and screen alike even 16 years after her death. But the Scottish-born author seems something of a mystery to American readers otherwise; I will admit that though I have taught two of her novels in college courses in the past, I knew little about her personal life until recently.

That life story would make a great novel itself, though it would require more than the usual suspension of disbelief. Part of the problem is that Spark was never all that forthcoming about her personal affairs: Even a 1992 autobiography covering the first four decades of her life, Curriculum Vitae, contains as much evasion and obfuscation as revelation. Nevertheless, what biographers have pieced together certainly intrigues.

Born Muriel Camberg in Edinburgh, Scotland, in 1918 to a Jewish father and a Presbyterian mother (actually, biographers have argued that both parents may have been Jewish), she moved to what was then Rhodesia at the age of 19 to marry a 32-year-old math teacher, Sydney Spark. Their marriage was short and unhappy, and Muriel Spark and her son returned to Great Britain. She worked for British intelligence during the Second World War, writing fake news—fake news!—for propaganda radio broadcasts.

After the war, Spark began publishing poetry and worked for a time as the editor of The Poetry Review; she also collaborated with the journalist Derek Stanford on literary appreciations of Mary Shelley, Emily Brontë and John Masefield, as well as an edition of the letters of Cardinal John Henry Newman. A romantic affair with an unhappy ending between her and Stanford soured her on the collaboration, though she retained a great interest in Newman, particularly for his literary and poetic sensibilities.

Like her former husband Sydney, Spark did not always enjoy good mental health. In the throes of a painful addiction to Dexedrine (sold over the counter for weight loss at the time) in the years following, she became convinced that T. S. Eliot was sending her messages in code. During her painful withdrawal from the drug, she suffered from depression. Among the friends and fellow writers who supported her was Graham Greene, who, according to Anne M. Begley in a 2010 article in America, “sent her a small monthly allowance accompanied by a few bottles of red wine to alleviate the sting of charity.”

In 1954, Spark became a Roman Catholic with the public support of Greene and Evelyn Waugh, having been baptized in the Church of England just a year before (“If you’re going to do a thing, you should do it thoroughly,” she later said. “If you’re going to be a Christian, you may as well be a Catholic.”). Novels began appearing in rapid succession, each more inventive than the last.

Her first, The Comforters (1957), is a novel about writing a novel; the protagonist hears a typewriter and a narrator in her own head all day long. In Loitering With Intent, the protagonist discovers the opposite: Everything she writes becomes reality. Perhaps her most famous creations are The Prime of Miss Jean Brodie and Memento Mori: In the latter, one character after another receives a cryptic phone call stating the famous title phrase: “Remember, you must die.”

“Spark’s readers are taken on satiric jaunts through various cities, times and places, bringing them face to face, mind to mind, with life’s odd, harrowing, real perplexities,” wrote America literary editor Patricia Kossman in 2001. “With a sharp observational eye (no doubt honed from extensive worldwide travels), she is able to put flesh—eerily familiar flesh at times—on the human predicament and its attendant conflicts. It’s all there: good versus evil, honor versus duplicity, self-aggrandizement versus self-pity. And she can be wickedly funny in the process.”

"It’s all there: good versus evil, honor versus duplicity, self-aggrandizement versus self-pity."

In 1955, the editorial board of the Catholic Book Club instituted the Campion Award to honor distinguished Anglo-American writers; recipients over the years have included Jacques Maritain, Frank Sheed and Maisie Ward, T. S. Eliot, Karl Rahner, Raymond Brown, Robert Giroux, Avery Dulles, Annie Dillard, Chinua Achebe, John Updike and Daniel Berrigan, among many others. (Let’s start giving this award out again! This is my best chance to meet Bob Dylan.) In 2001, the recipient of the Campion Award was Muriel Spark.

When America announced the award, Patricia Kossmann wasn’t sure what the response would be: Spark was an octogenarian at the time and had been living in Tuscany for many years. Estranged from her only son and intensely private about her personal life, she was a bit of an unknown. No need to worry: “When informed of our decision, her response was swift and gracious,” Kossman wrote, “even a bit surprising. She wrote: ‘I accept this honour with special pleasure in that I have been a devoted admirer of Edmund Campion, both as martyr and writer, for many years. I possess a reliquary containing a treasured relic of Father Campion, and of course I know Evelyn Waugh’s fine work on the saint.’”

Spark was, wrote Robert E. Hosmer Jr. in a 2018 appreciation in America, “always in complete control of both character and plot,” in her fiction and in her life. She received the Campion Award in absentia, declining the customary formal reception and dinner in New York City. She died five years later in Florence, Italy, and is buried in Tuscany. Her simple gravestone, reading Muriel Spark, Poeta, 1918-2006, stands in contrast to the many encomia given on her behalf in her final years, including one from The Sunday Telegraph that surely raised an eyebrow or two among her fellow Scots: “Britain’s greatest living novelist.”