The transformational world of Jon Hassler 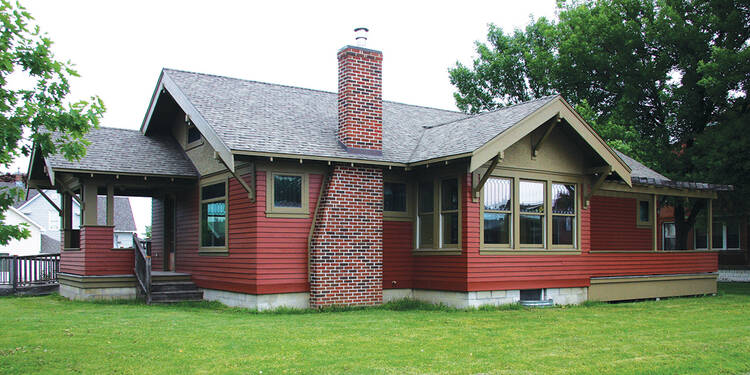 A festival in Hassler’s honor took place in June, spearheaded by a close friend of the author in Brainerd, Minn., where both taught for over a decade. The 2013 reissue of Simon’s Night, Hassler’s second novel, brought a fresh perspective for a brand new audience. And over the last decade Loyola Press has published a memoir, Good People, and Nodin Press of Minneapolis has released Conversations With Jon Hassler.

Born in Minneapolis in 1933, Hassler grew up in various small Minnesota towns. He attended Catholic grade school for a few years, attended high school in Plainview and graduated from St. John’s University in Collegeville. He earned a B.A. in English and taught high school for 10 years. After earning a master’s degree from the University of North Dakota—he wrote his master’s thesis on moral decision making in Ernest Hemingway’s novels—Hassler taught at Bemidji State University and Brainerd (now Central Lakes) Community College. In 1980 he accepted a Regent’s professorship at St. John’s, where he remained until his retirement in 2001. Diagnosed with progressive supranuclear palsy (a disease similar to Parkinson’s) in the early ’90s, he continued writing and publishing until his death in March 2008.

Hassler looked intothe hearts of Catholics and non-Catholics alike in the years following the Second Vatican Council. Hassler began writing short stories in 1970, imitating the style of the New England author John Cheever. A New York agent read one of those stories, and this led to the publication of his first novel. Over the next decade, Staggerford was followed by Simon’s Night, The Love Hunter, A Green Journey, and Grand Opening, as well as two young adult novels.

Like Alice McDermott, Hassler’s Catholicism has a distinctly regional dimension. He therefore belongs in the tradition of Hamlin Garland, Willa Cather, Sinclair Lewis and Sherwood Anderson. Hisportrayal of small-town Midwestern life is more modern than Garland’s, less acerbic than Lewis’s, and less macabre than some of Anderson’s stories in Winesburg, Ohio. Cather’s reputation now rests primarily on three or four unquestionable classics. Hassler’s will ultimately rest on a similar handful of unforgettable works.

As a Catholic writer, Hassler fits chronologically between Katherine Anne Porter, Flannery O’Connor, J. F. Powers and Walker Percy, on the one hand, and writers like Tobias Wolff, Andre Dubus and Ron Hansen on the other. Though likened to O’Connor because of some grotesque characters and situations, Powers is a more apt comparison. But whereas Powers, author of the acclaimed Morte d’Urban, specialized in stories about priests, Hassler’s scope of characters and situations is broader and more inclusive.

Hassler completed Staggerford during a year-long sabbatical from teaching. He tells of that experience in My Staggerford Journal, a book that combines journal and memoir. Staggerford is on the way to becoming a classic. On the surface it is the story of a burnt-out high school teacher in the small, fictional northern Minnesota town of Staggerford. A lapsed Catholic who rooms with his former grade school teacher—the formidable old-style Catholic, Agatha McGee—Miles Pruitt seems to stagger through a week of teaching at the end of October in the early 1970s.

Readers will marvel at the picture of a high-school teacher’s drudgery and the sheer exuberance of the satire and the humor. Characters pour from Hassler’s imagination like the images painted by Fra Lippo Lippi in Robert Browning’s famous dramatic monologue. Readers will also meet a comic principal and a lascivious dentist and his assistant, as well as a variety of students and a state patrolman who towers over everyone he meets. But woven into the humdrum life of Miles Pruitt is a tale of almost archetypal forces, including a figure of evil ominously called “the bonewoman.” In trying to help a female student, Beverly Bingham, Miles becomes the subject of scandal, an object of derision and finally an innocent victim. Yet at the novel’s end, the reader is left with a sense of grace and mystery despite the tragedy.

Hassler’s second novel, Simon’s Night, displays Hassler’s understanding and sympathy as he takes a slyly satiric look at the elderly. After exhibiting what to him seem signs of dementia, the retired college professor Simon Shea has checked into the Norman Home, a residential retirement facility. A Catholic still faithful to a wife who had left him three decades earlier, Simon struggles through a dark night of doubt and fear before he finds his way out of the Norman Home and back to his beloved lake cabin—but not before he helps give a Catholic burial to the amputated leg of a former Norman Home resident. Besides a cast of memorable characters, Simon’s Night also features a satiric, almost Dantean journey through the hell that is the Mall of America.

The Love Hunter chronicles a last duck-hunting trip shared by two friends and fellow teachers, Chris Mackensie and Larry Quinn. Larry is in the late stages of multiple sclerosis, and Chris intends to drown his friend in a Canadian marsh, ending his friend’s misery and leaving Larry’s young widow for himself. Yet the three-day trip—a veritable hell for Chris—is filled with surprises and renewed vitality for Larry.

A Green Journey reintroduces Agatha McGee and sends her to Ireland to meet a pen pal who turns out to be a priest. Hassler said on a number of occasions that Agatha’s conservative, pre-Vatican-II Catholicism expressed a part of himself, observing that when Agatha complained about the church’s excesses, it relieved him from having to do so.

After the gentle satiric humor of A Green Journey, Grand Opening returns to addresssome of the issues that animate The Love Hunter: alcoholism, parental neglect and mental instability, as well as willful malice. His most autobiographical novel, Grand Opening remains one of Hassler’s best-known and most popular works.

The novel’s densely plotted chapters introduce a host of fascinating citizens through their interactions with the Foster family, who had moved from Minneapolis to Plum, Minn., to realize the father’s dream of owning a grocery store. While loneliness and the need for love and friendship drive the plot, small town gossip and religious divisiveness provide spice and fascination.

Each of these early novels received positive reviews in the local and national press. Focusing on The Love Hunter in August 1981, the reviewer for The New York Times Book Review called Hassler “a writer good enough to restore your faith in fiction.” With these successes, Hassler gained a wider audience and, with North of Hope, perhaps his best novel, he confirmed his reputation as a Catholic author.

North of Hope introduces a priest, Frank Healy, whose midlife crisis does not prevent him from helping a childhood sweetheart and her drug-addicted daughter find hope on the edge of a northern Minnesota community of Native Americans. A sprawling chronicle that begins in Healy’s adolescence and stretches into his middle age, North of Hope confronts contemporary evil and dysfunction in an almost postmodern way. The Rev. Andrew M. Greeley, of the University of Chicago, praised Hassler in a review for his “Catholic imagination.”

“The Life and Death of Nancy Clancy’s Nephew” is a stunning novella of old age, depression and a search for friendship—and meaning in life. The protagonist, W. D. Nestor, is one of Hassler’s most moving though also disturbing creations. A sympathetic narrator watches as the crotchety Nestor struggles through his early 80s, stoically mourning the disappearance of his son and the death of his wife and depending more and more on a young man whom he had befriended as a latchkey child in the town library. Years later, when the now grown young man drives Nestor to visit his Aunt Nancy Clancy, the old man experiences a mysterious moment of transcendence before his death. A testament to the author’s dedication to his vision and his vocation as writer, “Nancy Clancy” should rank with North of Hope as one of Hassler’s most insightful and moving works.

The epigraph to A Green Journey consists in two lines from the end of Theodore Roethke’s poem “The Small,” which celebrates the numinousness of nature on an early autumn evening. The last stanza reads:

The small shapes drowse: I live
To woo the fearful small;
What moves in grass I love—
The dead will not lie still,
And things throw light on things,
And all the stones have wings.

The last two lines are a distillation of Hassler’s gift and a clue to his integrative incarnational vision. The final line, which might remind some of 1 Pt 2:5, suggests an almost mystical transformation of the material world.

“Things throw light on things” is a more elegant but enigmatic way of saying that context makes things special. For Hassler, it is the context of the infinite that makes everyday existence special. Apt details, lovingly described or sometimes merely named, give value to characters, events or objects they surround, creating an aura of the infinite.

Near the end of A Green Journey, Hassler gives the lines literal form. Agatha McGee is about to leave Ireland with her friend, Janet Meers. While staying overnight in a fictionalized seaside town, Janet goes walking along the stony breakwater as Agatha watches from a distance. Agatha sees Janet along the shore where “there were dazzling white stones among the gray.” After a few moments, “She watched in amazement as Janet, with a shout and a flap of her arms, turned all the white stones into gulls and sent them flying out over the water.” Janet has transformed what Agatha thought she saw into a kind of apparition. Through Janet’s agency, “all the stones have wings.”

In an interview for Image magazine in 1997, I asked Hasslerabout the origin of his Catholic worldview. He responded, “I’m indebted to those first few grades in parochial school for teaching me that everything in life is connected.” A bit later he added, “I guess maybe I see life as a whole.” It is part of Hassler’s gift, throughout his career, to see life as a whole, juxtaposing events and characters, thus yielding new meanings and interrelationships, making the entire work appear to fly. In a word, Hassler’s style is not “magic realism” but realism magically transformed.

Again and again Hassler transforms the banality of evil into Flannery O’Connor-type characters and events. A crazed woman kills a burnt-out teacher; a brilliant teacher stricken by multiple sclerosis turns psychotic in his despondency; an unloved juvenile delinquent is crushed beneath a walk-in cooler like the Wicked Witch beneath Dorothy’s Kansas cottage. But like St. Augustine, who speaks of God’s love treating “each of us as an only child,” Hassler (who includes many only children in his fiction) treats every character in that way. Jon Hassler discovers God’s presence in everyday life, as his novels throw a grace-filled light upon caring teachers, open-hearted wives and lovers, priests and spinsters—and a latchkey child who responds to an old man’s need for friendship and for love.

Ed Block is an emeritus professor of English at Marquette University, Milwaukee, Wis.