How Jesuit Walter Ciszek found God in the Russian gulag 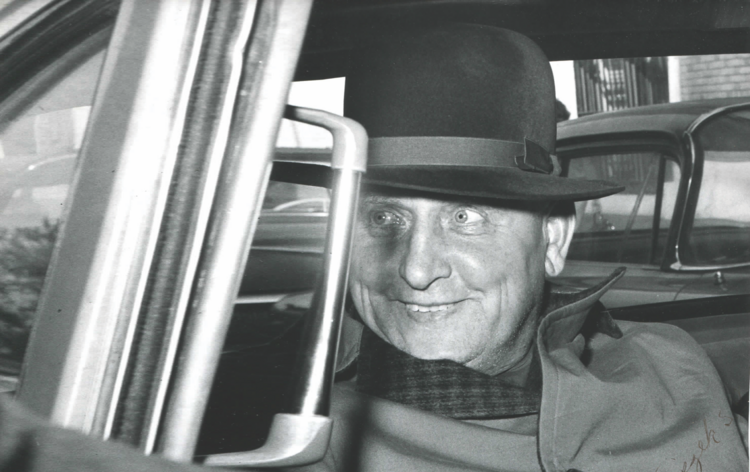 Walter Ciszek, S.J., arrives at America House on West 56th Street in New York City after his release by the Soviet Union in 1963. (Photo courtesy of America Press)

On a trip to rural Pennsylvania this past weekend, I had the chance to stop by the Jesuit Center in Wernersville, a few miles outside of Reading. Built in 1930 to serve as a novitiate for the Maryland Province of the Society of Jesus, the 250-acre property features a huge (85 bedrooms!) central building as well as lawns, grottoes, terraces and more—including a cemetery for Maryland Province Jesuits. I found the graves of two former America colleagues, George Anderson, S.J., and Dennis Linehan, S.J., and of many other old friends. And, of course, I finally got to visit the grave of Walter Ciszek, S.J.

It is impossible to read Walter Ciszek’s life story and not want to have met him. He will likely one day be canonized a saint (he is a “Servant of God” at the moment, an important first step in a long process) for his heroic life of service, including 24 years in the Soviet Union, most of which were spent in prison or in the infamous gulag system of labor camps.

"All during the long flight from Moscow, I had wondered what it would be like to see the United States again after 24 years in the Soviet Union, mostly in Siberia."

A tough kid from Shenandoah, Pa., he surprised his family and friends when he entered a local seminary after high school (apparently he had been in a local gang as a teen). At the age of 24, he entered the Jesuits. Ordained in 1937 after time in Rome to study theology and learn Russian, he was sent to Poland in 1938. When the Soviet Union occupied Eastern Poland in the early stages of the Second World War, Ciszek snuck into Russia under an assumed name and ministered to Catholics in the Ural mountains (he had been ordained for both the Roman Catholic and the Byzantine rite) while working as a logger.

In 1941, Ciszek was arrested and accused of spying for the Vatican. He spent five years in Moscow’s notorious Lubyanka prison, much of it in solitary confinement, and he then was sent to Siberia to work in forced labor camps throughout the region. As Ciszek related in his two memoirs, With God in Russia and He Leadeth Me, he also clandestinely ministered as a priest during years working in coal mines and factories. His family and religious community in the United States presumed he was dead; in 1947, the Jesuits included his name among deceased Jesuits for whom they prayed.

In 1955, Ciszek was released from the gulag (and succeeded in contacting his sisters back home) but was still closely monitored by the KGB; he worked for years as an auto mechanic while also continuing to minister as a priest. Finally, in 1963, the Soviet Union agreed to release Ciszek and another American who had been convicted of spying in exchange for the release of Ivan and Aleksandra Egorov, two Soviet nationals accused of the same in the United States. His arrival in New York City drew national attention. In an article for America published five months later, he related the moment:

My plane landed at Idlewild International Airport, at 6:55 A. M., in the gray dawn of October 12, 1963. All during the long flight from Moscow, I had wondered what it would be like to see the United States again after 24 years in the Soviet Union, mostly in Siberia. Yet, as we taxied to the terminal, I forgot all about that; I could think only of my sisters and of the fellow Jesuits I saw waiting to meet me. My throat seemed somehow to grow suddenly tighter; I felt a nervous happiness in the expectancy of that first meeting. I hardly remember much about Idlewild, therefore, except flashing lights in the early dawn, the crowd of reporters and that feeling of joy at being home. It was a long while before I could even begin to sift out my impressions of things here.

Among those there to meet Ciszek were his sisters and three Jesuits, including Thurston N. Davis, S.J., the editor in chief of America. Davis remembered the moment in an America column, joking that “in his green raincoat, grey suit, and big-brimmed Russian felt hat, Fr. Ciszek looked like the movie version of a stocky little Soviet member of an agricultural mission.” Davis drove him from the airport to the America residence on 56th Street in Manhattan. “We tried to shake an unknown man in a cab who tailed us,” Davis remembered, “[b]ut he followed us to our door and then drove away.”

With God in Russia almost instantly gained recognition as a spiritual classic and remains in print today.

Later that day, Ciszek was driven out to Wernersville to escape the droves of reporters and to be near his family home. One tale—perhaps apocryphal—is that the Jesuits had a secondary motive for the trip. They couldn’t be entirely sure the man in the green raincoat was actually Walter Ciszek; no one had seen him in 24 years, and he had been at hard labor for most of that time. Was the man before them actually a Soviet sleeper agent? As the story goes, he was driven around the Wernersville property with a former classmate who periodically asked him questions: What’s over this next hill? What will we see when we pass this grotto? Where is the well located? No Soviet spy could possibly know the lay of that land. He passed the test.

Ciszek’s superiors assigned America’s literary editor, Daniel Flaherty, S.J., to work with him on writing his memoirs. Flaherty described the experience in a June 2017 article for America. For six months after Ciszek’s return, they worked together to get his story onto paper. “It was not a hard story to write,” he remembered. “Walter had a fantastic memory, and my only job was to get it down on paper.” Unfortunately, they were a bit too prolific: When they finally finished the manuscript in March 1964, it was 1,500 pages long. They went back to work, and by that summer had it down to 500.

With God in Russia almost instantly gained recognition as a spiritual classic and remains in print today. It was followed in 1973 by He Leadeth Me, also written with Flaherty. Ciszek worked for many years in ecumenical relations and exchanges with Eastern churches, dying in 1984.

His writings in both memoirs as well as for America can be challenging: He was not overjoyed by everything he saw of the United States upon his return. He found American society shockingly wasteful, noting that “in America, I’ve watched mothers in the kitchen after a meal throw away more food, and better food, than I might eat in Russia in half a week.” He was also dismayed to see how cavalier many Americans were about faith: “At first glance religion here seems almost a formality, an obligation that can be dispensed with if you have been out late the night before,” he said. “I could not help being struck, thunderstruck, at this initial impression of indifference to religion in a country where there was nothing to restrain its open practice.” Perhaps after 24 years, he felt he had a right to speak his mind; and he had a lot to say.

Walter Ciszek’s cause for canonization is now under the auspices of the Diocese of Allentown: To learn more about that process, readers can click here.

"In America, I’ve watched mothers in the kitchen after a meal throw away more food, and better food, than I might eat in Russia in half a week."